Most Australians want political leaders to stick to a national cabinet deal to ease restrictions when the vaccination rate hits key targets, with 62 per cent backing the plan and only 24 per cent saying states and territories should go their own way.

Voters are increasing their support for vaccinations at the same time many of them decide the country will not return to zero coronavirus cases, with 54 per cent saying it is not possible to achieve “complete suppression” again. 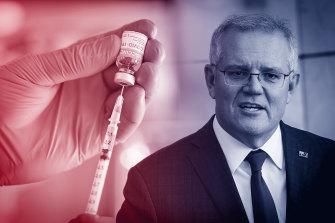 Prime Minister Scott Morrison wants state and territory leaders to stick to the plan to lift lockdowns once vaccination targets are reached.Credit:Fairfax Media

The exclusive findings lend weight to Prime Minister Scott Morrison’s call to the country to “get out of the cave” after weeks of dispute over whether to relax rules when the vaccine rate reaches 70 per cent and then 80 per cent of people aged 16 and over.

The Resolve Political Monitor, conducted for The Sydney Morning Herald and The Age by research company Resolve Strategic, finds majority support for the national plan within states including 64 per cent in NSW and 61 per cent in Victoria.

Support is lower in Queensland, at 57 per cent, where Premier Annastacia Palaszczuk is warning that opening up too quickly will increase virus infections, severe illnesses and the load on the hospital system.

Mr Morrison challenged Labor to back the targets on Tuesday after the Doherty Institute, which advises the government, released a statement that there was “light at the end of the tunnel” because the economy could open up at the agreed vaccine targets.

“The national plan provides the safety for Australians to move forward, out of the lockdowns,” Mr Morrison told Parliament.

But with Labor MPs heckling the government about the risk of rising case numbers, Opposition Leader Anthony Albanese accused the Prime Minister of being too slow to protect vulnerable people such as those in nursing homes and disability care.

“Would Australia be closer to reopening if the Prime Minister had not failed his two jobs on vaccine and quarantine?” Mr Albanese asked.

The new survey found relatively few people were undecided on the national plan, with 14 per cent unsure nationwide and similar figures within the main states, while 24 per cent wanted the state and territory leaders to have the freedom to decide on their own goals.

Asked if Australia would ever get back to complete suppression of the virus, 27 per cent said yes and 54 per cent said no, while 20 per cent were undecided.

Doherty Institute chief Sharon Lewin said on Monday that “we no longer have zero COVID as a goal” once the country reached 70 and 80 per cent vaccination.

Treasurer Josh Frydenberg declared in Parliament it was a “fallacy” to continue to call for elimination and that states and territories could ease restrictions safely once the 70 per cent target was reached, even with daily case numbers in the hundreds.

With case numbers soaring amid the debate over elimination, vaccine hesitancy has plunged to 12 per cent from 29 per cent in May. The figures reflect the percentage of the 1607 respondents who said they were not likely to take a vaccine appropriate for their age group in the next couple of months.

But only 10 per cent of those who are yet to be vaccinated said they were willing to take the AstraZeneca jab, reflecting months of dispute over a rare blood clot condition, official health advice to restrict it to older people, media headlines over its efficacy and political argument over its use.

That contrasts with 62 per cent who are willing to take the Pfizer dose among the same group of 570 people yet to be vaccinated, including those likely and unlikely to sign up.

The Moderna vaccine, which is due to arrive next month, was backed by 28 per cent of this group.

The Resolve Political Monitor asked 1607 eligible voters their views about vaccinations and lockdowns in an online survey from Tuesday to Saturday, a period when Mr Morrison and Mr Frydenberg intensified their call to stick to the national cabinet agreement. The results have a margin of error of 2.5 per cent.

The support for the pathway compares to a Resolve survey last month that found 54 per cent of voters believe lockdowns and border restrictions should be gradually discontinued.

The question asked: “Some state and territory leaders have suggested they might apply different rules at different times, such as using less severe restrictions once their populations reach 50 per cent vaccination or easing restrictions at 70 and 80 per cent if case numbers are still high. Do you think that each state and territory should stick to the national plan of 70 and 80 per cent or do you think they should have the freedom to decide on their own goals?”