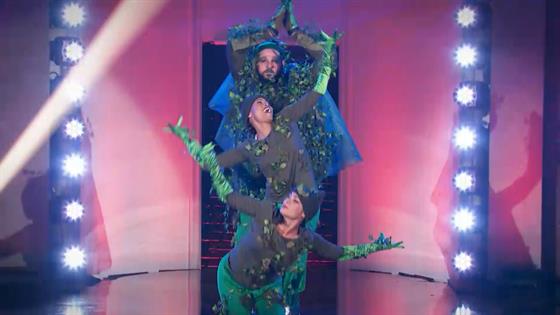 The Mean Girls star takes the E! show’s stage in this sneak peek of Wednesday’s episode, and he’s been transformed into a Venus Flytrap for his performance of Bananarama‘s “Venus.” His backup dancers even have fly swatters!

After pulling off a few special moves, Franzese is joined onstage by another dancer—but this one’s dressed up as a fly. The performance naturally concludes with him capturing said fly.

But before the judges can tell Franzese what they think of the routine, the comedian can’t resist an attempt to charm them: “I can’t let you all leaf without a show, right?”

Lucky for him, all three judges—Justin Martindale, Loni Love, and Allison Holker—end up loving his “Venus” rendition.

“This was everything. You were so dialed in!” Holker says, also complimenting Franzese on something many will likely miss. “…His shoe came off! And he kept going! That was amazing.”

“I thought it was fantastic, and just the minimal detail that you had—you didn’t have a lot of props, it wasn’t like a lot of clutter,” Martindale adds. “It was just you, and you were the show, and that’s what I wanted!”

Love chimes in last, and says Franzese’s performance is a great example of what makes The Funny Dance Show different from other competitions.

“One, because we have people who have the confidence to dress up like they’re a bush,” Love says. “You’re also able to pull it off and you pull it off well! You did great.”

Watch a brand new episode of The Funny Dance Show Wednesday at 11 p.m., only on E!