The Murray Darling Basin Authority (MDBA) on Tuesday warned a Productivity Commission inquiry government policies "must evolve now" to meet the ambitious objectives of the National Water Initiative – which was born in 2010 following the Millennium Drought. 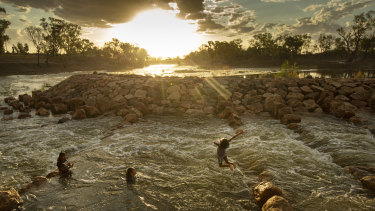 Kids swimming in the fishway at Brewarrina Weir, North West NSW, in February when the first strong flows in years came down the dry Barwon River in the Murray Darling Basin. Credit:Mark Evans/Getty Images.

"There are some real and emerging challenges," said MDBA chief executive Phillip Glyde. "The climate is changing more rapidly than predicted, water markets are evolving quicker than some players can keep up, and there is a strong need for inclusive and transparent decision making."

The MDBA said "despite government commitment, First Nations’ access to water and participation in management is lagging".

Former Water Minister David Littleproud established in 2018 a $40 million fund for Aboriginal communities to invest in water for cultural and economic uses, and later that year the federal government passed laws to ensure indigenous representation on the MDBA board.

The MDBA told the Productivity Commission that "the climate is changing more rapidly than predicted," which placed "water resources under ever-increasing pressure."

River flows in the Murray Darling Basin will decline by as much as 40 per cent over the next 50 years under the current trajectory of global warming, according to one of Australia’s top hydrologists.

The MDBA said there was a "fundamental need" for government policies to adapt to the new paradigm.

The MDBA said water market reforms had helped irrigators to trade more efficiently and increase their productivity, but governments needed to recognise the "positive and negative" impacts of the complex trading systems on farmers and their communities.

Last month the consumer watchdog warned that sweeping reforms are needed to clear up a raft of concerns about the murky Murray Darling water market, as the competition watchdog warns mum-and-dad farmers are suffering under free market reforms that unfairly advantage large corporate traders.

A series of changes by state and federal governments have delayed and downgraded the ambition of the Basin Plan since it was enacted in 2012.

The plan is required to return 3200 billion litres back to the environment by filling two separate buckets.

The other bucket is 450 billion litres. It originally legislated to take water from irrigation buybacks in the southern Murray Basin in NSW and Victoria to boost downstream flows into South Australia.

Changes driven by NSW and Victoria, in response to a farmer led campaign highlighting economic impacts from reduced irrigation entitlements, created a new test to ensure any irrigator buybacks have a neutral or positive impact on the socio-economic health of the surrounding area.

That means more buybacks are unlikely and it remains to be seen how the 450 billion litre bucket can be filled.