What all couples can learn from Meghan and Harry about family boundary setting, according to a therapist 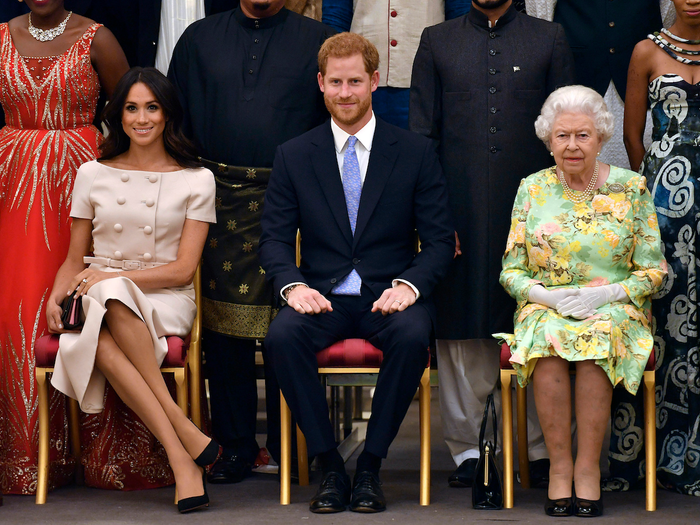 On Sunday night, CBS aired Oprah Winfrey’s pre-recorded interview with Harry and Meghan, their first public appearance since announcing on January 8, 2020 they were to resign from their royal titles.

The two-hour special covered intimate details about the couple’s lives over the past two years, including how their decision to leave resulted in a rift between them and the rest of Harry’s family.

The transition away from royal duties included Harry, Meghan, and their baby Archie becoming financially independent from the Queen and splitting time between the United Kingdom and California.

According to therapist Nedra Glover Tawwab, Harry and Meghan’s choice is a positive example of family boundary-setting, or the literal and figurative limits a person creates in their relationships to preserve their mental health.

“When I saw this story, I was really excited because I often talk about how it’s important to create the life you want,” Tawwab, author of the upcoming book “Set Boundaries, Find Peace: A Guide to Reclaiming Yourself,” told Insider. “Seeing this was monumental.”

Setting boundaries with family is a normal part of growing up

Though the scrutiny Harry and Markle faced for their decision isn’t something commoners deal with, setting boundaries with family is a natural part of becoming an adult for everyone, Tawwab said.

It can include actions like physically moving away from family, setting aside alone time away from family to recharge, refusing to discuss certain topics with others that make you uncomfortable, or asking a family member to stop offering unsolicited advice, according to Psych Central.

“Separation gives us the ability to live a life you’re proud of and happy with,” Tawwab said.

For non-royals, this process typically happens for young adults heading off to college or moving out of the house for the first time, Tawwab said. Then, a young adult gets the chance to live by their own rules, which allows them to establish themself as an individual.

According to Tawwab, it’s possible Harry just recently made this change because he didn’t have the opportunity, or realize it was an option, when he was a young adult.

During his interview with Winfrey, Harry said marrying Markle woke him up to the fact he was “trapped” in his family. He also told Winfrey he wouldn’t have stepped down from his royal duties if he never met his now-wife.

Markle, unlike Harry, went to college away from her family, already has existing family boundaries, and comes from another culture. For those reasons, it’s possible Markle “could serve as an inspiration for him to be a version of himself he’s more happy with,” Tawwab said.

Without boundaries, you could end up resenting your family

The barrage of negative and racist media attention towards Markle and lack of support from his family, also pushed Harry to change course, he told Winfrey.

Tawwab said their decision to do what felt right for them was ultimately more healthy than following tradition for tradition’s sake.

“If you don’t negotiate your boundaries, it’s possible you’ll end up anxious, depressed, or resentful because you’re living a life you don’t want to live,” said Tawwab.

“To truly be happy, you have to step outside” family tradition, and setting boundaries allows that to happen, according to Tawwab.

Your boundary-setting might not be well-received, and that’s OK

Although setting boundaries with family is done to foster personal happiness, the process can be difficult and lead to tension among family members.

“Family members might respond by pushing back, ignoring your boundaries, or refusing to respect your boundaries in some other way. Also, your family could be so offended that it causes damage to the relationship,” Tawwab said.

Indeed, Harry mentioned to Winfrey that Prince Charles, his father, stopped taking his calls soon after he announced his resignation from his royal duties. The family also cut Harry off financially and the Queen flaked on a planned visit with the couple after the news broke.

According to Tawwab, boundary-setting could cause a parent or elder to feel offended. That reaction tends to stem from an unconscious want for that elder to have family members who are more like them.

When they realize the child of the family would prefer to break tradition and do their own thing, it can be uncomfortable, according to Tawwab.

If this happens, Tawwab said it’s important to remember that it’s not the boundary-setter’s job to manage family members’ reactions. Harry was a shining example of that, though his family has yet to reach out or apologize.

When Winfrey asked Harry why he thought his father acted that way, he said, “Because I took matters into my own hands. It was like: I need to do this for my family. This is not a surprise to anybody; it’s really sad that it’s got to this point, but I’ve got to do something for my own mental health, for my wife’s, because I could see where this is headed.”

In many relationships, those feelings of tension tend to dissipate when family members realize the boundaries were created for personal mental health reasons, and that setting boundaries doesn’t mean a person is shunning their family, Tawaab said.

Rather, it means a person gets to develop a personal sense of self that they can share with their family once they’re back together visiting for holidays or other reasons.

“Creating the life you want might piss some people off in the process, but eventually most families come back together,” Tawwab said.

To set boundaries, be direct and unapologetic

According to Tawaab, it’s possible Markle and Harry set a firm boundary in leaving the UK because they felt their other attempts to do so were ignored.

Markle mentioned that she wasn’t offered a therapist when she asked for one, and that the family said her child Archie wouldn’t be offered security services.

“You can try setting boundaries in a gentle way, but if they’re not well-received you may have to up your boundaries by doing the thing you’ve been talking about doing.”

For anyone trying to set family boundaries, Tawwab said it’s important to be direct and unapologetic about what you want.

“Don’t provide lengthy explanations and try to stick to simply stating your boundary,” she said, adding that boundary setters should avoid getting aggressive with name-calling or yelling since it will make the situation more difficult to navigate in the future.

And for anyone who is worried that setting boundaries will alienate their family forever, Tawwab said time can repair negative feelings.

“Creating the life you want might piss some people off in the process, but eventually most families come back together,” she said.

“You’ve likely done uncomfortable things before that caused tension and you got through those. Setting boundaries is just that in another version of that.”