Who wouldn’t want to live in a French castle? Just ask Dick and Angel

It’s the eternal question: what possesses seemingly rational adult people to move to France? More specifically, in the case of Escape to the Chateau stars Dick and Angel Strawbridge, what made them decide to up sticks from the UK and start a new life in a French castle?

Dick says that the urge came somewhat on the spur of the moment: “We’d been on holiday in the south of France and we were living in a tiny little house in a tiny little cobbled village. It was lovely and we realised we could buy the house for about 10,000, maybe 15,000 pounds. And we thought, What the hell are we doing living in the UK? Why don’t we have a simple life in France?” He pauses. “Well, that didn’t last long, did it?” 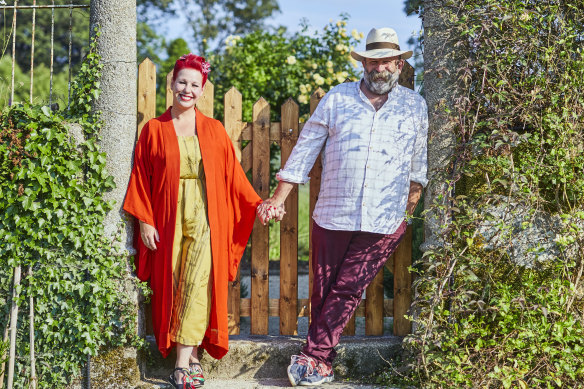 Angel and Dick Strawbridge from Escape to the Chateau.

Simplicity, it turned out, was not to be the hallmark of the couple’s French journey – not once the Chateau de la Motte-Husson, in Martigne-sur-Mayenne, hove into view.

“It was four years that we looked for something,” says Angel, “and it could’ve been anything, from a beautiful townhouse to a fairytale castle. When we found this place, I still believe that it found us. I know that sounds a bit corny, but it was everything we wanted.”

Naturally, “everything we wanted” is a relative term: when they first moved in, the chateau had no heating, water, electricity, sewage or glass in the windows. “But it was pretty,” Dick says. “Up until the point when Angela said it was time for a new roof.”

Indeed, the chateau was, as the French say, “le fixer-upper”. That’s where the magic of television came in: had the place been in perfect working order from day one, Escape to the Chateau would probably have not appealed so much as a premise. As it is, the show has followed Dick and Angel’s journey in making the chateau habitable, and eventually turning it into a spectacularly gorgeous function centre, for eight seasons. It now brings them to Australia for a live tour, where they will tell the story of how their disparate lives came together and led them to become castle owners.

Clearly, there is a powerful public appetite for observing the lives of people embarking on what, at first sight, seems a somewhat mad adventure. No doubt there’s an element of vicarious living involved in being a Chateau fan: who wouldn’t want to live in a French castle? But it’s more than just longing for beautiful surroundings, the story of the Strawbridges is about the fundamental human desire to take the great leap into the unknown, to see an opportunity and take it, and to disregard the fear and insecurity that is an equally powerful part of being human.

“I think we both really believe that you get one pass at it and you’ve gotta live it,” Dick says. “I think where we come from is, we’re very aware that you’ve just gotta keep living it and enjoying it.”

Angel chimes in: “Gotta grab it. It’s one of the reasons I fell in love with Dick in the first place, he’s got such a passion for life. There’s a saying: suck the marrow out of the bones of life.”

Her words are an excellent reminder that Escape to the Chateau is also a love story, quite an unlikely one. The Myanmar-born engineer Lieutenant-Colonel Strawbridge, awarded an MBE for distinguished service in Northern Ireland, became a presenter on various TV programs, including Coast and Scrapheap Challenge, before meeting hospitality and interior design expert Angel Adoree – two children and one chateau later, here we are.

In their live shows, they try to flesh the tale out a little: “What we want to do is explain how this ridiculous thing happened,” Dick says. “When I met Angela, it was ridiculous, I was the wrong side of 50. There’s 20 years between us, we were born continents apart, we end up living in a castle with children.“

“Our lives, both of us, they’ve been varied,” Angel says. “And there’ve been so many different things that have happened, and if one of them hadn’t happened, we wouldn’t be here.”

Talking to the Strawbridges together, they seem made for each other: finishing each other’s sentences and punctuating the dialogue with uproarious shared laughter, despite the fact that in Dick’s words, they “shouldn’t have worked together”. There’s a chemistry that makes it easy to understand why so many viewers have wanted to keep them company as they did up their dream house over the years. It helps that both the Strawbridges are, to say the least, comfortable with performing for the camera.

“I wouldn’t say I’m an exhibitionist,” says Dick, musing on his varied TV career, “but I have no fear about talking. When I did my very first television series, I didn’t have any inhibitions about talking to a camera because when you go through life as an army officer, you’re a salesperson. Leaders don’t just tell people things, you have to lead them. Then I had a career in industry solving problems, where you’re a salesperson. I think doing television we’re doing the same thing, we’re convincing people. And we’re as natural as we can be because if you try acting, if you try doing things that are not you, it’s not real and people see that.”

What is real and what isn’t is all relative, of course, when you’re talking about a TV show about a couple of Brits raising a family in a 19th-century chateau in the French countryside. Once you can say your house has a moat, reality seems almost malleable. Is there a limit to how much of la vie en rose viewers can take? With the chateau sitting on a huge estate, taking in rolling fields and woodlands, and the potential for building more houses, the couple sees no end in sight.

“We’ve still got so much more we can do with the place,” Dick enthuses. “So many more little adventures to have.”

If there’s one thing that the Strawbridges have demonstrated, it’s that a spirit of adventure can take one a long way. Who’d bet against them taking it even further? As Lieutenant-Colonel Strawbridge, MBE, says, “We’re getting away with it, aren’t we?”

Escape to the Chateau is on 9Now. Dare To Do It with Dick and Angel is touring in February and March, 2023.