Hooray, Eurovision is back!
What are you, Latvian?

No, just a fan of three-minute pop songs and water-based choreography. Last year’s cancellation broke my heart.
Well, me too. More than 12 months since COVID forced Eurovision to scrap its competition for the first time in its 65-year history, the iconic song contest returns this week – to Rotterdam in the Netherlands, which is currently experiencing a seven-day average of more than 5750 new COVID cases each day. 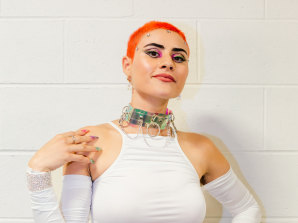 Australia’s hope Montaigne will be competing in Eurovision remotely.Credit:Jess Gleeson

That’s depressing. How are they even going to stage this?
With as little human interaction as possible. Countries are currently being kept in “delegation bubbles” and aren’t allowed to mix with anyone else, plus they’re required to get COVID tested every day. Still, the Dutch government has okayed maximum audiences of 3500 people to attend each of the live finals, which will make it one of Europe’s biggest concerts since the pandemic started.

Is anyone else performing from home, or just Australia?
At this stage, it’s still just Australia. Out of all 39 competing nations, Montaigne’s the only artist who will not be performing live in Rotterdam – instead relying on a strict “live-to-tape” performance she recorded in Sydney in March.

Technicolour is such a catchy, dynamic song. Australia must be in with a good chance?
Hmm. Are you sitting down?

Oh no.
Online bookies have us listed at 301-to-1 odds and a “less than 1 per cent” chance of winning the crown. In fact, Montaigne’s predicted to narrowly miss the top-10 cut-off from Semi Final 1, meaning it could be the first time in five attempts that Australia doesn’t qualify for the Grand Final.

Yikes! Is that likely?
The voting’s split between a professional jury and an online popular vote, so anything could happen. But SBS at least seem to be priming our audience for such a possibility, with Australia’s head of delegation Josh Martin mentioning in recent interviews that “we’ve never taken it for granted that we’d qualify” for the Grand Final.

I have taken it for granted. Honestly, I thought we were just invited straight into the Grand Final each year.
This is going to be bad.

So if not Montaigne, who’s the favourite?
There are a few top contenders who’ve been cycling around favouritism in recent weeks: Italy, Malta, France and Switzerland.

Talk me through them, please.
Italy’s entrant is Maneskin, nu-metal revivalists who won the 2021 San Remo Festival in March with Zitti e Buoni, the same song they’re performing at Eurovision. Their frontman comes across as Italian Marilyn Manson, which is unfortunate in this era.

Malta’s hope is 18-year-old diva Destiny Chukunyere, a former Junior Eurovision winner with the vocal depth of a divorcee triple her age. Her empowerment anthem Je Ma Casse is a radio-ready banger that more or less positions her as Euro-Lizzo.

Voila, a moody chanson from France’s Barbara Pravi, is the traditionalists choice with its vocal-focused, native tongue atmospherics. I have no idea what she’s saying but hearing it feels like downing a pack of Gitanes and two bottles of Chateauneuf du Pape.

Tout l’Univers, a pounding piano ballad from Switzerland’s Gjon’s Tears, has also had sustained hype from Eurovision obsessives. It has that swirly 007 vibe that the contest loves in its tearjerkers, but a serious ballad? What a waste of Eurovision’s kitsch potential.

Any dark horses we should look out for?
Yes, Iceland’s Daoi og Gagnamagnio’s (don’t ask me how to pronounce it, I don’t even know how I wrote it) song 10 Years, a tribute to his wife, is slick Scandi-electro funk and has surely the competition’s best choreography. But his delegation just tested positive to COVID, so his performance in Semi Final 2 might come down to the “live-to-tape” option which would doom his, admittedly overly-ironic, campaign.

Although it’s almost an SNL skit of pop siren lasciviousness and cultural confusion, Mata Hari from Azerbaijan’s Samira Efendi might be THE Eurovision moment for anyone who still thinks music’s peak moment was Britney Spears’ Toxic. Also for any families who watch Eurovision together, this is likely to be the moment in the broadcast where you all blush in unison and silently avoid eye contact.

But my douze points? Ukraine’s Go_A with the track SHUM. Just look at this brooding slab of Eastern European hi-nrg, with a piercing piccolo hook and lyrics about environmental degradation (or something). It’s also apparently based on a Ukrainian folk song from the Chernobyl region. I mean, this would kill at goth clubs.

Eurovision, I’ve missed you so much. I can’t wait. My popcorn is ready.
I think you mean “my fries with mayonnaise”? Please, now is not the time to half-arse Eurovision.