With NY Hamptons restaurants maxed out, some offer big bribes for table reservations

A couple of weekends ago,  Mitch Modell decided to try his luck at 75 Main in Southampton, since reservations for the month were already all claimed.

The bar area was jampacked, and the wait for a tables was two hours. But the former CEO of Modell’s Sporting Goods, whose own son is a host at the restaurant this summer, tried to jockey for a better position by passing out tips to the staff — a move that has worked in the past.

“After giving out a couple hundred dollars I still couldn’t get in, and my son said, ‘Dad, you are killing me. You have to go somewhere else or eat at home,’ ’’ reports Modell, 66, who owns a house in Bridgehampton.

Finally he spotted two women finishing dinner and offered to pick up their bill if they allowed him to join their party. They agreed — and when they finished dessert, Modell co-opted the small table, inviting his five friends to sit down.

“We all crowded in to their little table and one guy [who was waiting] started flipping out, yelling that it was supposed to be his,” Modell recalled. “It was a little cramped and the tables around us were staring, but you have to do what you have to do and we were hungry.”

It’s no secret that the Hamptons have been maxed out since COVID began, with rental-house costs going sky high — if you can even find one. But while most people stayed in last year, this season is proving to be ­unlike any other, as lifted COVID ­restrictions mean the hordes are out in full force.

“People are champing at the bit to get out and celebrate. They are incredibly motivated and spending like never before,” agreed Andrew Tobin, general manager at the popular Tutto Il Giorno in Southampton.

And rejection is not going over well with entitled people who aren’t used to hearing the word “no.”

Tobin said his staff has been offered everything from NASCAR tickets to helicopter rides.

“The calls usually start with, ‘We’d like to invite you to something’ — and then it’s, ‘Oh, by the way, can we get a table?’ ” he said with a laugh. “The [diners’] assistants who call have become very aggressive.”

One regular told The Post she was at Le Bilboquet in Sag Harbor last weekend and overheard a manager discussing how he had taken a mini-voyage on a customer’s yacht and spent an afternoon at the man’s golf club.

“They offer to fly us on private planes, take us on boat trips or give us concert tickets,” she told The Post. “They ask the host, ‘What is your Venmo?’ We don’t have a regular phone line, only a private one. One lady stops by with an envelope full of money every time she comes in, because she is so grateful for getting the VIP number.” 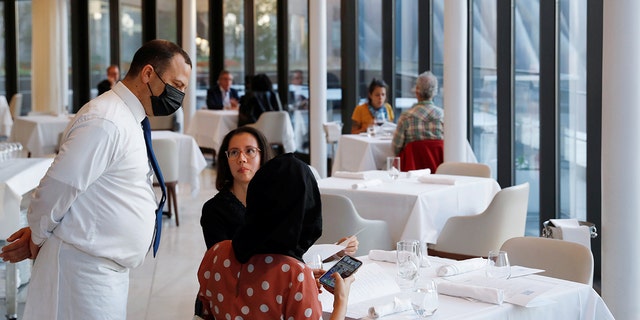 A waiter tends to patrons in the Mediterranean seafood restaurant Estiatorio Milos at the Hudson Yards in Manhattan, New York, Sept. 30, 2020. (REUTERS/Andrew Kelly)

“Unfortunately, we weren’t able to accommodate any of them,” said Trendafilova.

JB Parvaix, a fellow manager at the tony waterfront spot, said of some customers: “They get hold of our numbers and call late at night and early Sunday morning without any regard. They just want tables. I become very famous just from ­Memorial Day to Labor Day.”

Parvaix stressed, however, that he will accept a gratuity only after a customer has a good experience. “I don’t take money from people I don’t know — otherwise I would have to take their constant calls.”

On top of eateries having a finite number of seats, there is a widely recognized staffing shortage this summer, which means that service can be slow.

Many continue to book the same number of diners, but Maurizio Marfoglia, who owns Dopo La Spiaggia in Sag Harbor and East Hampton and Dopo Argento in Southampton, has decided to limit seating — not because of social distancing, but because he doesn’t have the staff to cover his usual number of tables.

“We don’t want our customers to get upset if things aren’t up to our standards,’’ explains Marfoglia. “We don’t take as many reservations. I used to hold a few tables for friends, but now I keep only one a night.”

Rhonda Lovings, who is 53 and works in finance, rented a house in Sag Harbor this summer and decided to book restaurants as far ahead as possible, even though she had no specific plans.

“It’s been very stressful managing these reservations,” she said. “I have to set my alarm for the minute the reservations open for weeks ahead. There are all these side phone numbers and links that you have to be in the know to get. I went to dinner a couple of times at Tutto Il Giorno in Sag Harbor and one day they gave me an e-mail link for future reservations. I felt so cool!”

Ian Duke, who owns Union Sushi and Steak  in Southampton, as well as Southampton Social Club, revealed he was offered $3,000 last weekend by a customer who wanted a table at the latter spot — and just for after-dinner bottle service.

In the Hamptons, it seems, money can buy happiness.

Zach Erdem, the owner of 75 Main, admitted that he gave preferential seating to a customer who had purchased a $1,500 bottle of Chateau Haut-Brion   — and that he also agreed to hold a July 4 table for entrepreneur Brock Pierce after Pierce spent $25,000 at 75 Main last weekend.

Grocery magnate John Catsimatidis, meanwhile, is taking no chances on securing a prime table at 75 Main — he actually purchased one for the season. The five-figure sum doesn’t even go toward food credit.

“It’s like renting a house,’’ ­Erdem said of the table. “You still have to pay for the wine and groceries.’’