A woman who found her first grey hair when she was just twelve years old dyed her locks every two weeks before finally embracing her silver mane – which some people mistake for a medical condition.

Primary school teacher Lauren Midgley, 26, from Alberta, Canada, always knew that going grey at a young age was a possibility since it was a family trait on her mother’s side.

However, when she discovered her first grey hair aged just 12, Lauren was still a little shocked. Throughout her teens, Lauren’s mother Lana, 56, spent hours box-dyeing her hair, to cover the grey patch that was emerging at the front of her hair.

Not knowing of anyone even close to her age with grey hair, Lauren felt embarrassed by her hair and would even pluck it out.

By the time Lauren reached her twenties, the constant dyeing of her hair was proving to be an expensive hassle, costing her over $94 (£55) per month. 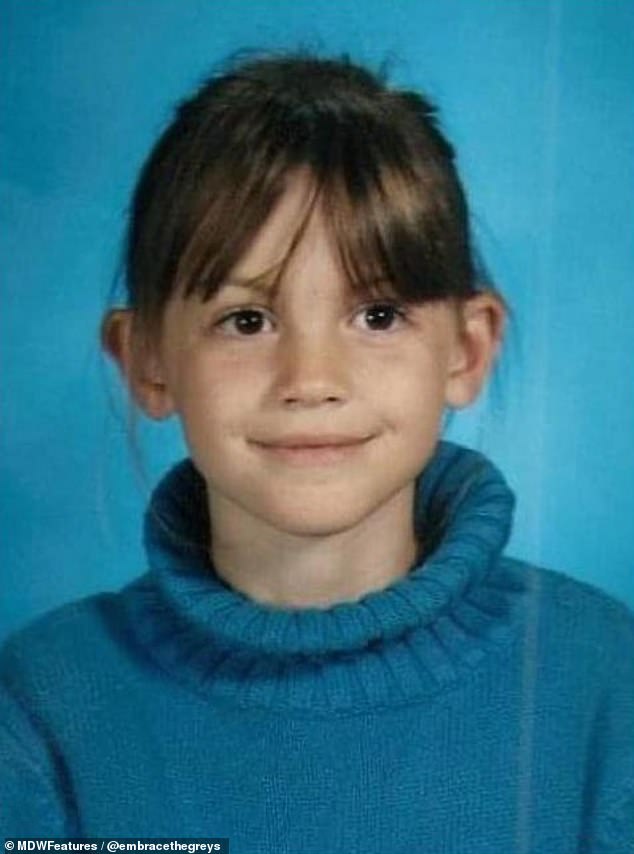 Lauren Midgley, 26, from Alberta, Canada, who found her first grey hair when she was just twelve years old dyed her locks every two weeks before finally embracing her silver mane – which some people mistake for a medical condition. Pictured, before turning grey 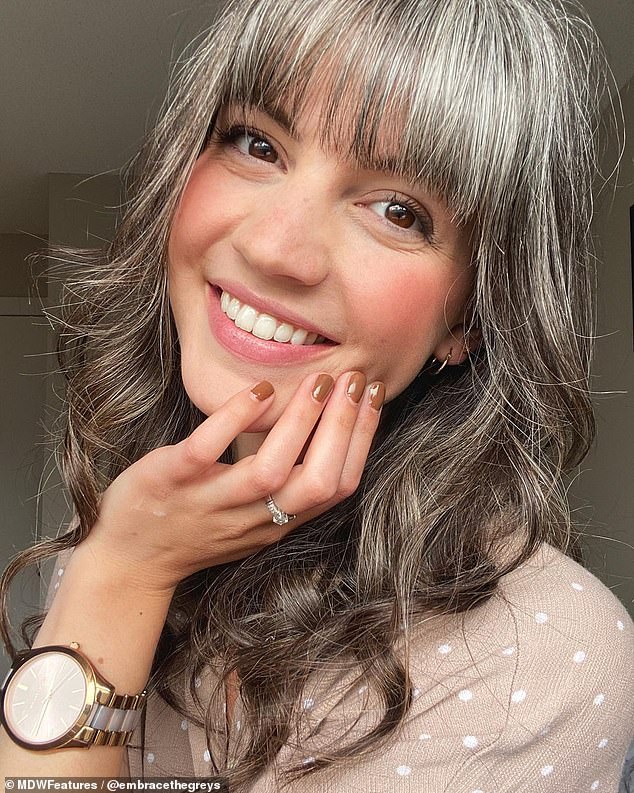 The primary school teacher always knew that going grey at a young age was a possibility since it was a family trait on her mother’s side. Pictured, after turning grey 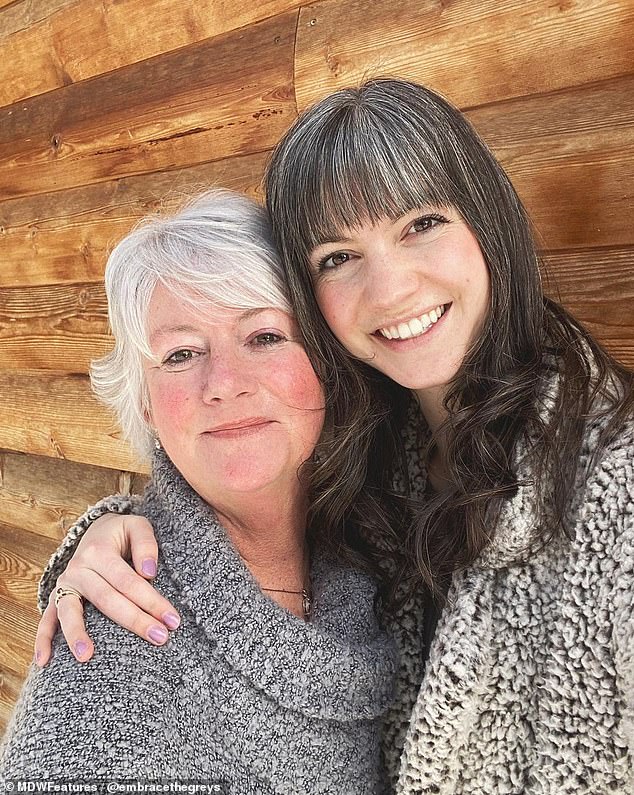 Throughout her teenage years Lauren’s mother Lana, 56, spent hours box-dyeing Lauren’s hair, to cover the grey patch that was emerging at the front of her hair. Pictured, together

Lauren told her hairdresser about the problems she was having with her hair, who suggested that Lauren should try growing it out and told her that adding lowlights would make it look fantastic.

Only 24 at the time, Lauren felt comfortable that strangers would simply think she had decided to dye her hair grey, since this was a popular trend at the time.

At the start of 2021, after two-and-a-half years of embracing her own grey hair, Lauren stumbled across grey positive or ‘grombre’ Instagram pages which celebrated people naturally turning grey.

Seeing that very few on these pages were quite as young as herself, Lauren was excited to share pictures of her own grey hair, in order to represent this younger demographic.

With her picture featured on a prominent grey hair positive Instagram page, Lauren received an influx of friend requests and messages on social media, telling her how beautiful her hair looks and how amazing it is that she is embracing her hair. 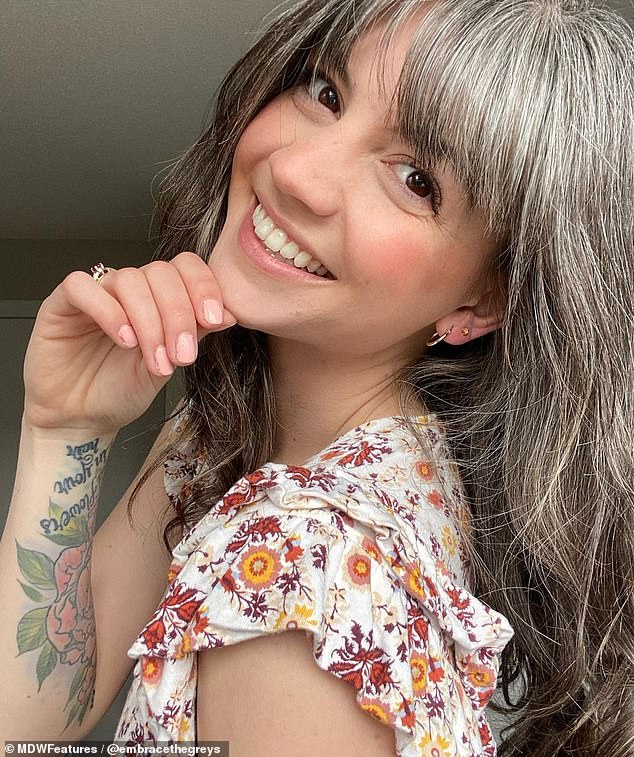 Aged just 26, Lauren wanted to share her pictures to normalise having grey hair at such a young age 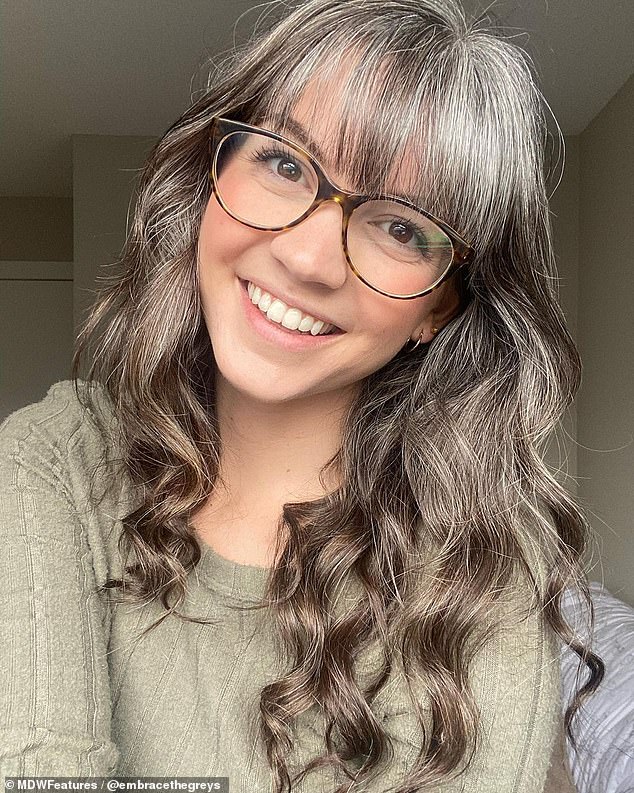 This confidence boost, alongside encouragement from her family led Lauren to create her own Instagram profile in February 2021, where she posts grey-positive photos to her ever-expanding following.

Whilst the majority of the comments Lauren receives are positive and tell her that her hair is beautiful and her journey is inspirational, she admits that she does also receive messages from infatuated men, often up to forty years older than her, that make her feel uncomfortable.

On one occasion, she was even offered a shopping allowance if she would provide the stranger with her attention. Lauren assumes that these people are simply trying to be nice and responds, thanking them for their kindness.

Lauren has also had people ask her ‘what happened to your hair?’ and ‘are you sure there is nothing wrong with you medically?’ but believes these just come from a place of misunderstanding as opposed to malice. 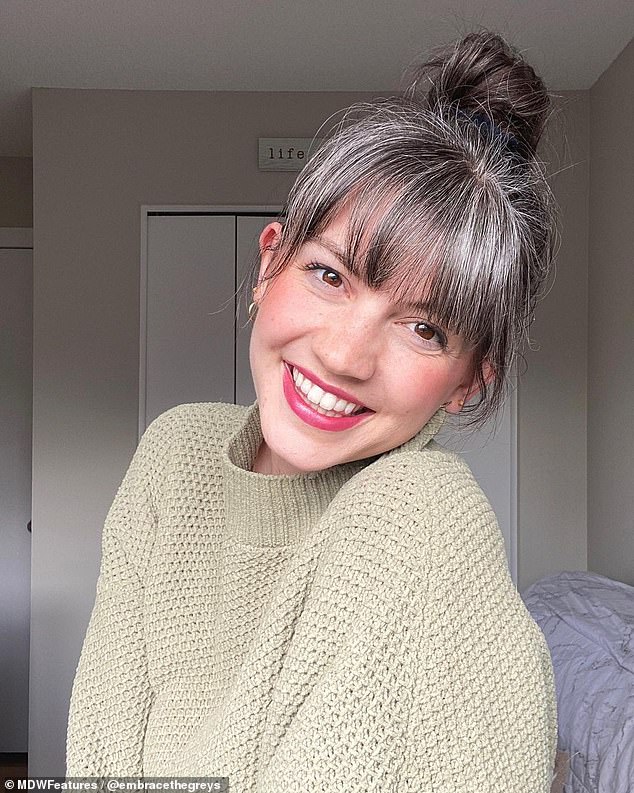 Initially feeling embarrassed by her grey hair, Lauren (pictured) would box-dye her hair up to twice a month 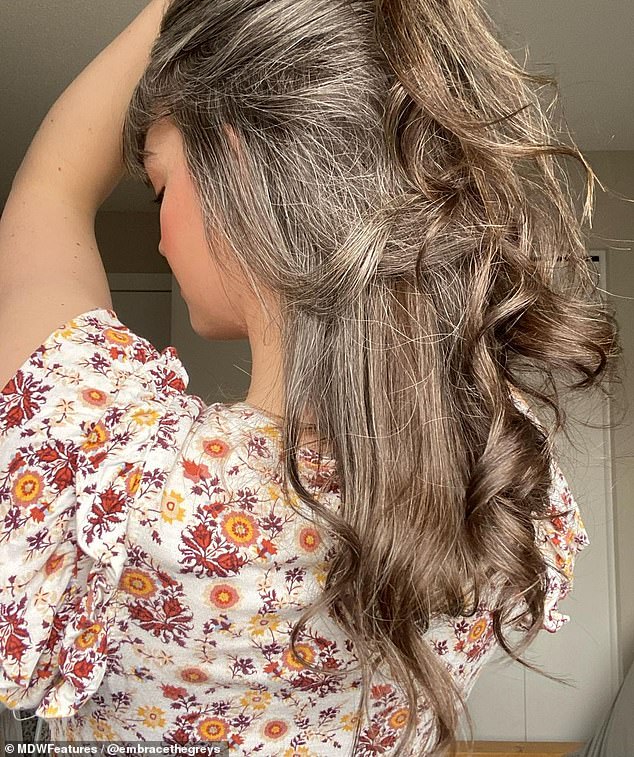 Lauren is keen to use her platform to teach her young students that you should be accepted for who you are and do not have to follow societal norms.

‘My mother found my first grey hair when I was twelve years old,’ said Lauren. ‘She spent many hours box-dying my hair to help me cover the grey since it was right in the very front of my head.

‘I used the opportunity to experiment with different hair colours which was fun. But at the same time, I felt really embarrassed because I didn’t know anyone else my age with grey hair.

‘I was also taught that they should be pulled out or dyed, and just letting them be was never really an option.

‘This is just what my mother was taught, but we have both changed our ways since then.

‘I don’t think many people really knew I was grey because I was quite diligent with dying it so no one would notice.

‘I didn’t really want to embrace my natural hair colour but it got to the point where I would dye it, and a week or two later, grey would be poking through again. 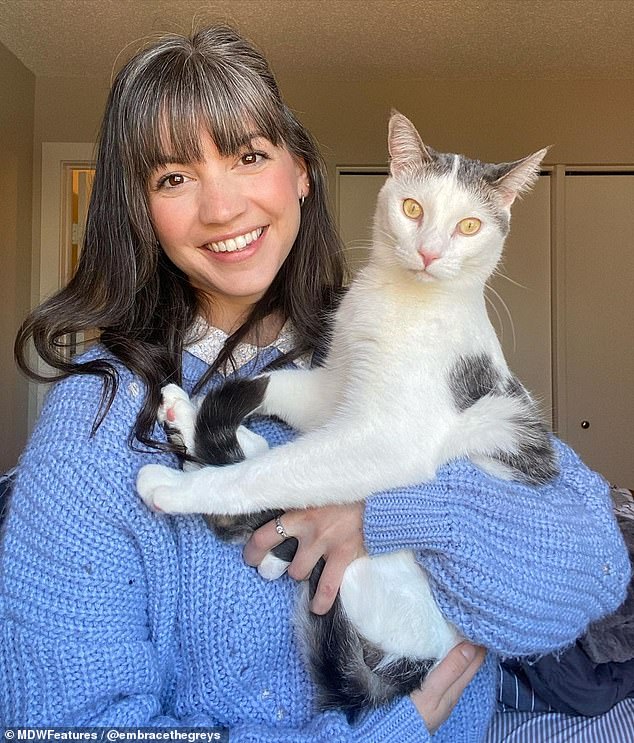 With encouragement from her family, Lauren created her own Instagram profile in February 2021, where she posts grey-positive photos to her ever-expanding following. Pictured, Lauren’s last full dye was in July 2018 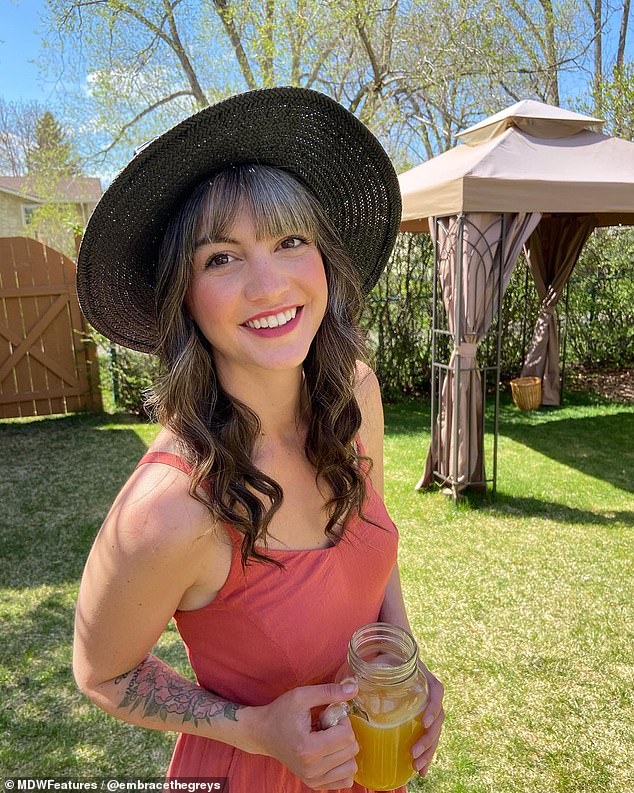 Lauren (pictured) stopped dying her greys in 2018, after her hairdresser convinced her it would look great

‘I just couldn’t keep up with the cost, time commitment and hassle of covering it. It was actually my hairdresser who suggested that I let the grey grow.

‘I wasn’t so sure, but I always trusted her opinion and decided to go for it. I think because I’m so young, a lot of people just never knew if it was natural or not and didn’t comment on it to be on the safe side.

‘I’ve heard people say things like, ‘what happened to your hair?’, ‘why would you stop dying your hair?’, ‘how do you have so much grey hair already?’ and ‘are you sure there’s nothing wrong with you medically?’

‘I stumbled across the idea of being “grombre,” which means celebrating grey hair and found the ‘grombre’ Instagram page. I was so shocked and excited to see so many women embracing their natural hair.

‘I noticed that there was almost no one my age on the page, so I decided to submit my photo and story to help represent younger women embracing their grey hair.

‘My photo and story was featured and I was completely blown away by the positive response.

‘At this point, even though I had been growing my hair for over two years, I wasn’t very confident in the way it looked, so this positive reaction really gave me a confidence boost. 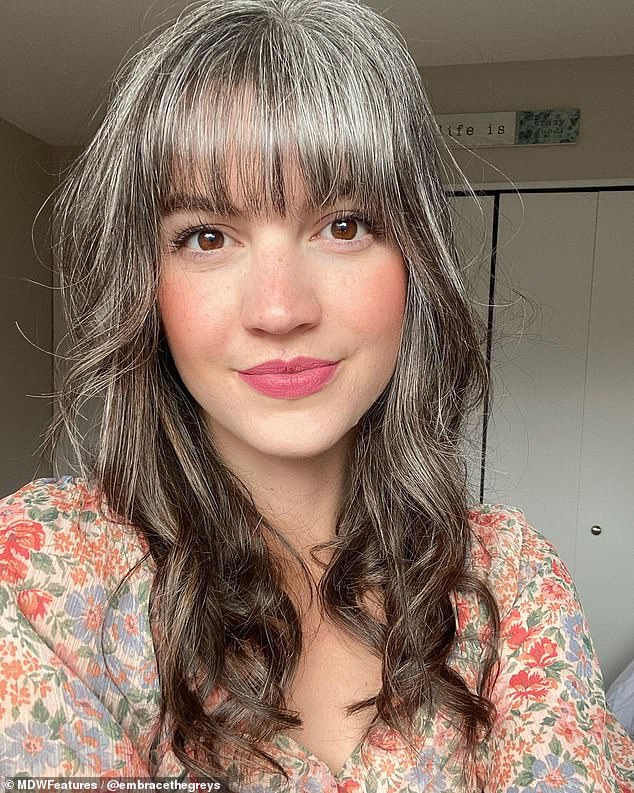 Lauren (pictured) says she doesn’t understand the fascination with grey hair from some men, but as long as the comments are respectful, it doesn’t really get to her 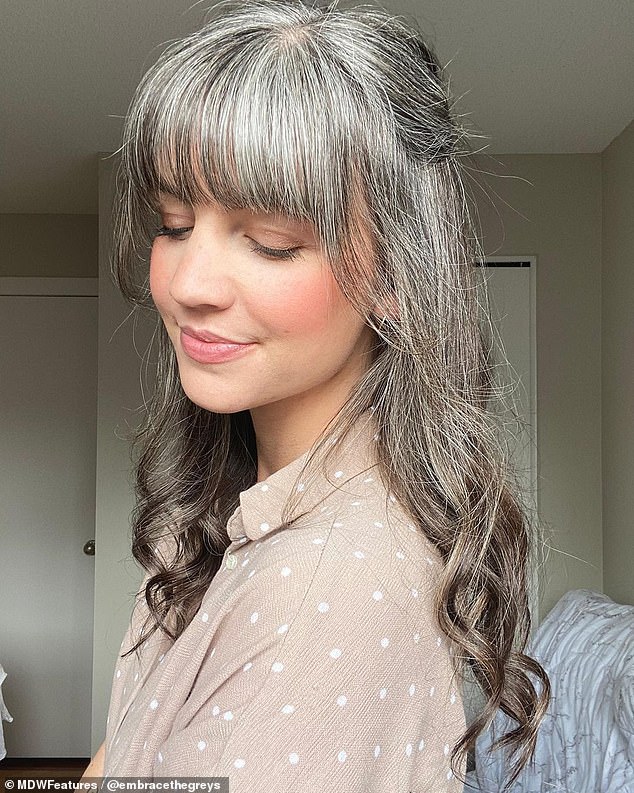 One man even offered Lauren (pictured) a shopping allowance in return for giving him attention. The 26-year-old politely declined

‘After some encouragement from my friends and family, I decided to make my own page to share my story and it has been so much more than I expected.

‘I’m pretty overwhelmed with how much attention my page has got in the three months that I’ve had it. The response has been overwhelmingly positive and I am so grateful for that.

‘I get a lot of compliments from strangers on my hair as well and I’m so happy to see that more and more people are accepting their grey hair.

‘I have yet to meet anyone in real life that is my age with grey hair, but I am seeing more and more women out and about with grey hair.

‘It feels like we are part of some secret club and it’s a really interesting way to connect with someone without even having to say anything.

‘Online, I definitely get comments that make me a little uncomfortable and I usually just ignore them.

‘I really don’t understand the fascination with grey hair from some men, but as long as the comments are respectful, it doesn’t really get to me.

‘I like to assume that most people are just trying to be nice, and so I try to be nice back and thank them for their kindness.

‘I can’t tell you how many messages and comments I have received from women in their forties, fifties and sixties telling me, “I wish I had ditched the dye in my twenties.”‘ 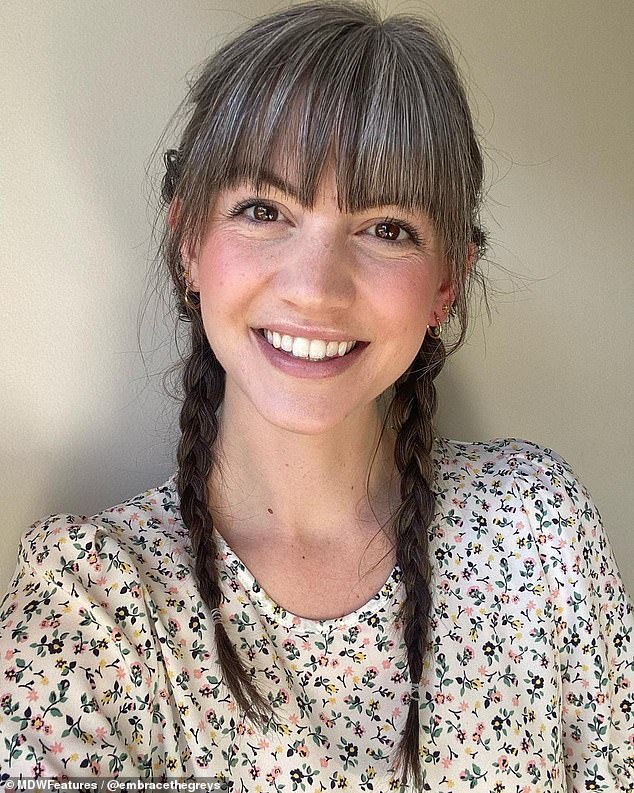 Since posting her grey positive posts on Instagram, the 26-year-old (pictured) has been inundated with positive messages from supporters saying how beautiful she looks

‘There are a lot of women out there who would have embraced their grey hair earlier if they had a community of people to support them.

‘It wasn’t until I found the silver sisters community that I felt confident in my appearance and I have a lot of kind and supportive women to thank for that.’

Lauren hopes that by sharing her story, other women afraid to show off their silver hair will no longer be embarrassed to do so.

‘I’m really proud of the grey hair movement and the positive change all of these beautiful women are making,’ said Lauren.

‘I think that there’s a lot of negativity that comes with social media and it can be really damaging to our self-esteem in so many ways.

‘It’s so amazing that this community of women online has been so positive and uplifting – I think that’s rare to find.

‘I feel that there is still a long way to go in building acceptance of grey hair and breaking down the stereotype that grey hair means that you are old or have ‘let yourself go.’

‘Every day that these women are sharing their journeys, we are moving closer and closer to normalising grey hair at any age.’