Woman, 26, told she would need full DENTURES to fix her teeth

Woman, 26, who was warned she would need full DENTURES to fix her decaying teeth reveals how treatment with invisible braces has restored her smile

A woman who was told she would need full dentures to fix her decaying teeth has told of the life-changing Invisalign dental treatment which transformed her smile.

Shannon Wilde, 26, from Epsom, was terrified of the dentist and had poor oral hygiene, leaving her with yellow discoloured teeth which were littered with fillings.

After years of being on antibiotics for severe dental pain, she finally tried to fix her teeth and was ‘horrified’ to be told dentists would have to replace her teeth with full-dentures in order to help improve her smile,

But she went on to visit Dr Dr Kunal Patel from Love Teeth Dental, who advised she follow a nine-month Invisalign treatment which transformed her smile and gave her a new-found confidence. 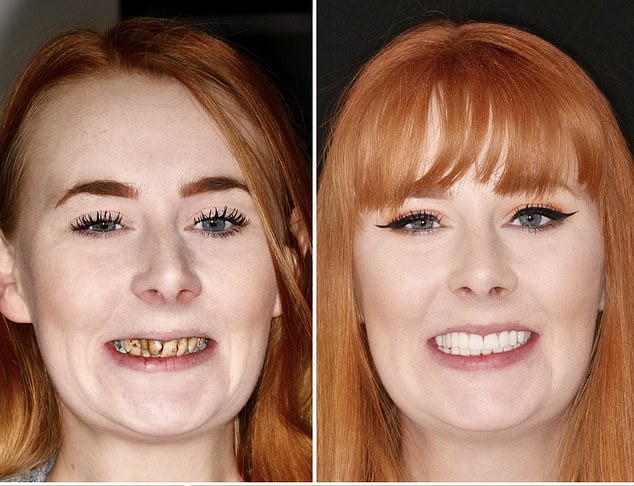 Shannon Wilde, 26, from Epsom,  was told by dentists she would need full dentures to fix her smile (left) before undergoing Invisalign treatment which transformed her look (right)

Shannon confessed that she never maintained good dental hygiene and was terrified of visiting the dentist.

By the time she had left school and started to work, she had taken to wearing clip-on veneers to stop people noticing her discoloured, misshapen teeth.

She admitted: ‘Looking after my teeth was not a priority when I was growing up.

‘I wasn’t taken for routine dental appointments, and the importance of brushing and looking after my teeth wasn’t really explained to me. 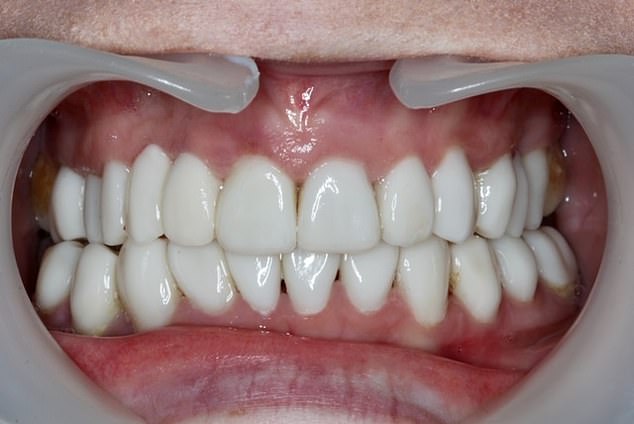 Invisalign is a contemporary tooth straightening system which works by repositioning teeth discreetly, little by little, using a series of removable ‘aligners’. (She is pictured during treatment)

‘As a result, the only dental appointments I had were for severe pain and abscesses, leaving me petrified of the dentist who I associated with negative experiences’.

She revealed: ‘The first dentist I saw suggested that there was nothing he could do other than fit me for full dentures’.

Invisalign is a contemporary tooth straightening system which works by repositioning teeth discreetly, little by little.

It uses a series of removable ‘aligners’ which are made from clear polymer, so no one can see them.

These are custom made to move each individuals’ teeth, changed in weekly increments.

The aligners are worn for 22 hours a day, only being removed to eat and drink and for tooth cleaning after every meal.

‘I was horrified, but was seriously considering taking this option, until I was recommended to visit Dr KP from Love Teeth Dental. ‘

Dr Patel revealed that while her oral hygiene was not good, the clip on veneers she had been wearing were actually damaging her teeth further.

He said: ‘She was not taking them out often enough and would sometimes go days at a time without removing them, because she was so embarrassed to show people her real teeth.

‘Plaque had built up around her teeth, food had become trapped and her gums were sore and bleeding.

‘Additionally, the veneers had chipped away at her enamel and broken her teeth even further.’

He established that he couldn’t perform any treatments on Shannon while she wasn’t maintaining good oral health, so began helping her to build a good routine.

Dr Patel organised regular appointments with himself and his dental hygienist over a period of nine months to help her become more dentally fit.

The next goal was to correct the alignment of Shannon’s teeth which had become misshapen over the years, as a result of decay and enamel softening. 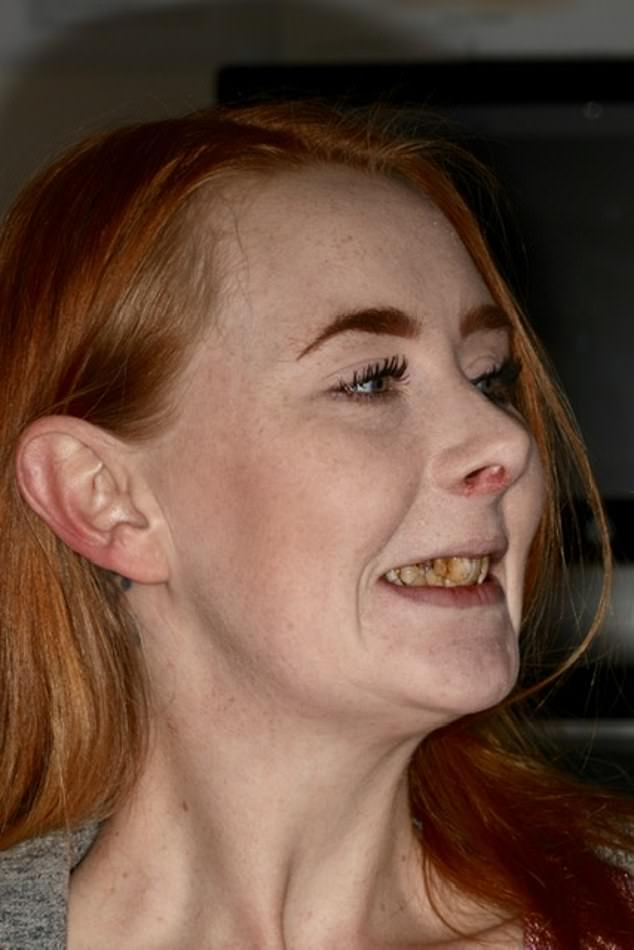 She was fitted with temporary dental crowns before she embarked on Invisalign treatment to realign and gently move her teeth into position, preventing them from decaying any further.

Shannon revealed: ‘Little by little my teeth began to move and become straighter. I noticed that eating food became easier as my bite improved.

‘Because the aligners are virtually invisible, no one noticed or commented on the fact I was wearing them, which I was really pleased about, because while my teeth were improving, I was still very self-conscious.

‘My teeth began to look noticeably straighter after a couple of months of wearing aligners, and slowly but surely, my confidence began to grow.’ 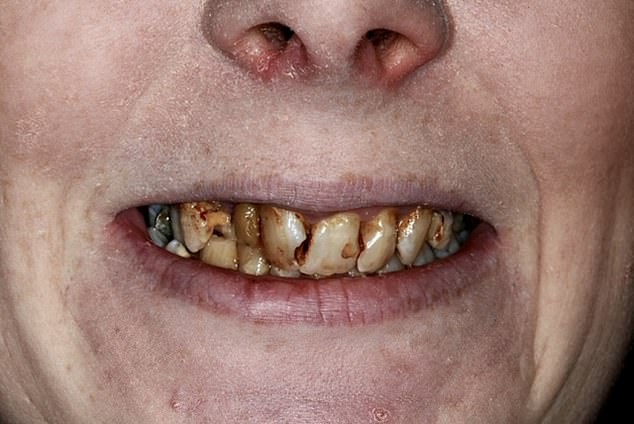 She added: ‘I was delighted with the result of my smile transformation. At the final stage of my treatment, my permanent crowns were put in place.

‘While my temporary crowns looked and felt amazing, Dr KP had always explained that they would be replaced with permanent fittings once my teeth were straightened.’

Shannon explained that her treatment has completely transformed her confidence, as well as her oral hygiene – as she now brushes her teeth at least twice daily and floss every day.

She said: ‘Since I started my treatment, my oral hygiene, has changed completely, I brush my teeth at least twice daily and floss every day. 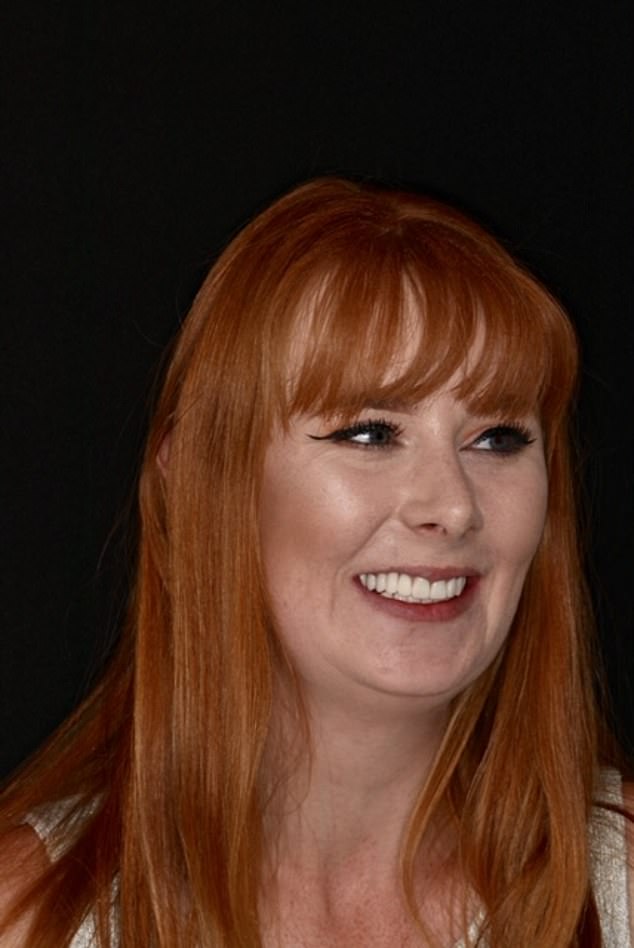 Shannon explained that her treatment has completely transformed her confidence, as well as her oral hygiene. She is pictured after treatment

‘I am no longer in dental pain and am determined to never be again if I can help it’.

‘The change in my whole demeanor has become apparent to everyone – both work colleagues and friends. ‘

She explained: ‘I have become much more confident speaking to people; I no longer worry about hiding my teeth when I talk or smile.

‘I no longer fear people noticing my clip-on teeth. I literally cannot stop smiling I love my new teeth so much.’