A strong economic recovery out of the tight coronavirus restrictions in place across half the country may be delayed until next year, one of the nation’s top banks has warned as signs emerge the growing financial cost of lockdowns is hitting low-income earners and women across NSW.

ANZ economists on Friday said they expect GDP to contract by 3.3 per cent in the September quarter – the second-largest quarterly fall on record – before a lower-than-expected recovery boost through the final three months of the year if lockdown restrictions are eased. 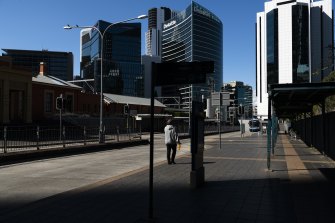 Quiet scenes like this at Parramatta’s bus terminal point to a fall in GDP of 3.3 per cent in the September quarter, according to ANZ economists.Credit:Rhett Wyman

This week, Treasurer Josh Frydenberg said he expected the economy to contract by at least 2 per cent in the September quarter before staging a strong recovery as consumers and businesses tapped $290 billion in unused savings.

AMP Capital chief economist Shane Oliver, who a fortnight ago said the hit to the September quarter could be 2.5 per cent, now thinks it will be closer to 4 per cent or about $25 billion.

A strong recovery through the December quarter and early next year is increasingly important to the government’s plans for the 2022 election, which is expected to be held between March and May.

But ANZ’s economics team, led by senior economist Felicity Emmett, said the current lockdowns would now mean inflation and wages growth would take longer to reach the targets set by the Reserve Bank, which is likely to start lifting interest rates early in 2024.

ANZ had expected the September quarter to show a 1.3 per cent drop in economic output, but the string of lockdowns now meant it was likely to be 3.3 per cent before a “modest” 2.4 per cent rebound in the December quarter.

“A negative result in the December quarter (which would then put Australia into technical recession) seems unlikely at this stage, as it would require that restrictions are heavier (and hence economic activity lower) across the whole quarter,” it said.

“We continue to forecast a strong rebound in economic activity through next year. While undoubtedly some households and businesses face financial stress, in aggregate, household and business balance sheets remain in good shape.”

While balance sheets may be strong, financial pressure on lower-income earners is starting to grow as the lockdown cuts off their jobs.

NAB’s quarterly financial wellbeing survey showed a deterioration through the past three months. The index, which goes up as financial stress increases, saw its second consecutive quarterly rise. Measures of financial stress in NSW reached the same levels seen during the depths of last year’s nationwide lockdown.

Stress among women, the young and lower-income earners all increased through the quarter. For the first time since NAB started its survey in 2014, women were more stressed than men.

While almost eight in 10 of those surveyed said they wanted to increase their savings, a net 24 per cent reported dipping into their savings over the past three months, while for women that figure was 36 per cent.

NAB’s behavioural economics team said the survey suggested the nature of current lockdowns and the lower levels of government assistance available to people was hitting low-income earners the hardest.

“There is a growing economic divide as financial stress rose among lower-income groups but fell for high-income earners,” it said.

“This may in part reflect changing assistance measures and disproportionate impacts of lockdowns and other COVID restrictions on some in the community.”