Coronavirus has mutated into at least 30 different strains and New York may have one of the deadliest imported from Europe, a new study has found.

One of China’s top scientists, Professor Li Lanjuan from Zhejiang University, tested a small group of 11 patients and found many mutations of SARS-COV-2 – the virus strain known as coronavirus, which causes the respiratory illness, Covid-19.

Li’s team looked at how each strain infects and kills human cells, and found the most aggressive strains could generate 270 times as much viral load than the least potent type, the South China Morning Post reports.

The deadliest strains found within the Covid-19 patients, collected from Hangzhou in Zhejiang province, had also been found in patients across hard-hit European countries, including Italy and Spain, before spreading to New York – the epicentre of the US outbreak.

The milder mutations of coronavirus have also spread across the US, in states like Washington.

The researchers say their study – which has not been peer-reviewed by other experts and was published on medRxiv.org – is the first to show with laboratory evidence that certain mutations can affect a more severe illness.

The authors wrote: ‘Sars-CoV-2 has acquired mutations capable of substantially changing its pathogenicity.’

But they warned the milder mutations can still lead to a severe illness.

Two patients, in their 30s and 50s, became severely ill after contracting a weaker strain.

They both recovered but the patient in their 50s had to be treated in an intensive care unit in hospital.

The researchers say they detected 19 new mutations of coronavirus out of about 30 in total.

All of the patients are receiving the same treatment regardless of their strain, they added.

Transform your body in six months: Mum, 30, drops three dress sizes after pregnancy by following a ‘flexible dieting’ method that ANYBODY can do – and she still eats burgers and dessert

A young mother has proudly showed off her incredible post-birth body transformation after shedding three dress sizes despite eating six meals a day.

Maggie Chretien, 30, from Melbourne, said she felt ‘trapped’ in her own body after struggling with her fluctuating weight since the age of 21.

By the time she was 26, she became a serial yo-yo dieter, training up to 12 times a week and she convinced herself the only way to lose fat was to eat foods she hated like boiled chicken and plain steamed vegetables.

But after giving birth to her baby son Jagger in April 2018, she banished her tummy to get a toned physique with washboard abs after losing 23cm from her waistline within six months without giving up fries, ice cream and chocolate.

The mother-of-one credits ‘flexible dieting’ for her size six physique where she eats 80 per cent wholefoods and 20 per cent of anything she wants, within reason. 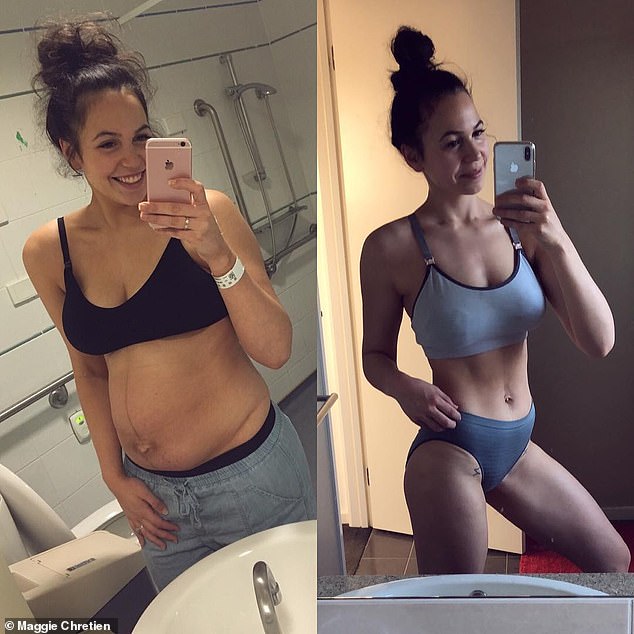 Before and after: Maggie Chretien, 30, has proudly showed off her incredible post-birth body transformation after shedding three dress sizes despite eating six meals a day 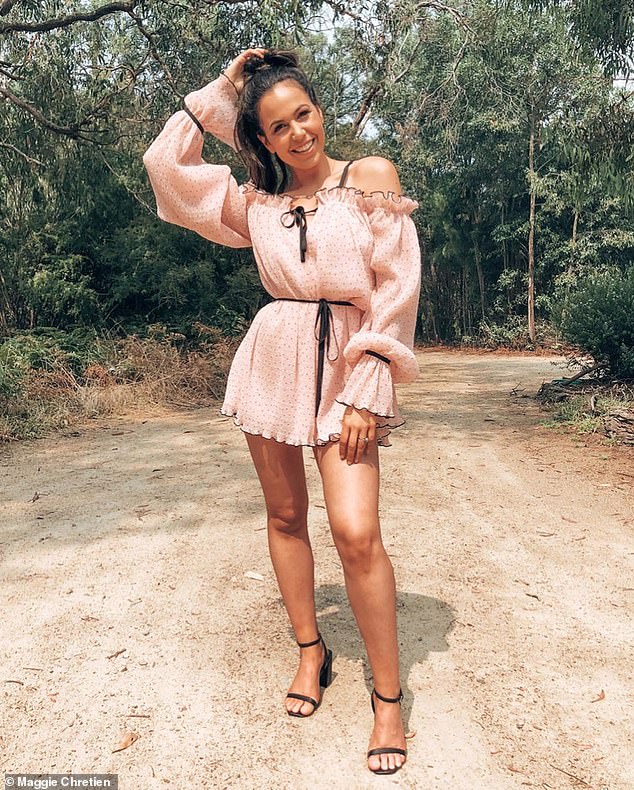 The mother-of-one credits ‘flexible dieting’ for her size six physique where she eats 80 per cent wholefoods and 20 per cent of anything she wants, within reason

Before embarking on her weight loss journey, the mother-of-one said the biggest challenge she faced in her life was food.

‘I have always been around food, my dad is French so carbs really are a big part of my life,’ she told Daily Mail Australia.

‘I have always enjoyed exercise, but I had a really bad relationship with food because I just didn’t understand it. I would feel guilty for eating food I thought was bad for me, and I would just cry because I felt really uncomfortable in myself.

‘I was eating boiled chicken and steamed vegetables and then on the weekends I would binge on chocolate and ice cream.’

As she took up gym challenges where she’d workout between 10 to 12 times a week, Ms Chretien noticed she was losing weight but yo-yo dieting quickly derailed her hard work.

Yo-yo dieting is a pattern of losing weight, regaining it and then dieting again. It’s a process that causes weight to go up and down like a yo-yo.

‘The workouts would help me lose weight but I was yo-yo dieting because it just wasn’t sustainable. It really wasn’t good for my body and it was even worse for my mental health,’ she said.

SNACK:  Pretzels and an apple

But her turning point to lose weight in a healthy way came after the birth of her little boy following years of yo-yo-dieting.

‘I knew I couldn’t continue the way I was going. Once I had my son, I didn’t want to be that mum who didn’t want to take photos with her baby because of her insecurities,’ she said.

So she turned to Equalution – a science-based nutrition program which involves meeting daily targets of macronutrients – protein, carbohydrate and fat – that have been calculated based on the dieter’s age, gender, activity level and any condition.

‘To be honest, at first I didn’t believe it could help – I just couldn’t comprehend that eating foods I enjoyed would help me lose weight. But it did,’ she said.

‘It’s changed my life, honestly, I don’t want to think about where I would be without them. My relationship with food is now a good one. They also made me realise that it wasn’t just my body that needed help, but also my mindset. Mindset is everything.’ 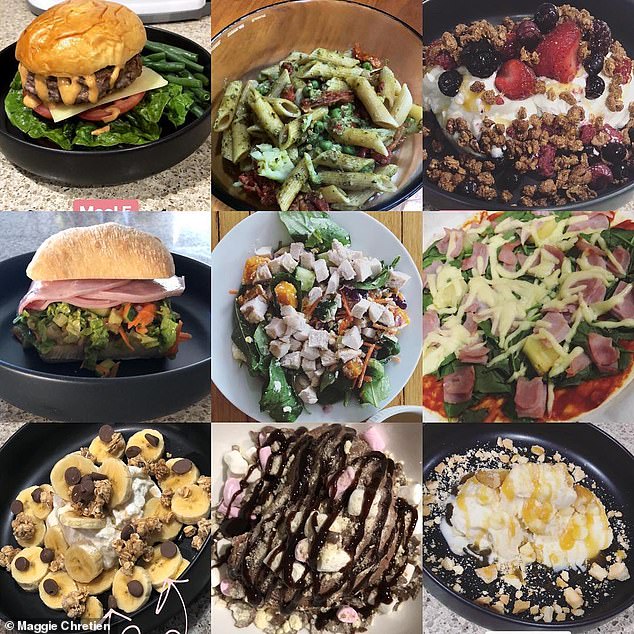 Her diet includes macronutrients – protein, carbohydrate and fat. She eats 80 per cent wholefoods and 20 per cent of anything she wants, within reason. The mother said she’s been able to enjoy her favourite foods such as ice cream, burgers and pasta 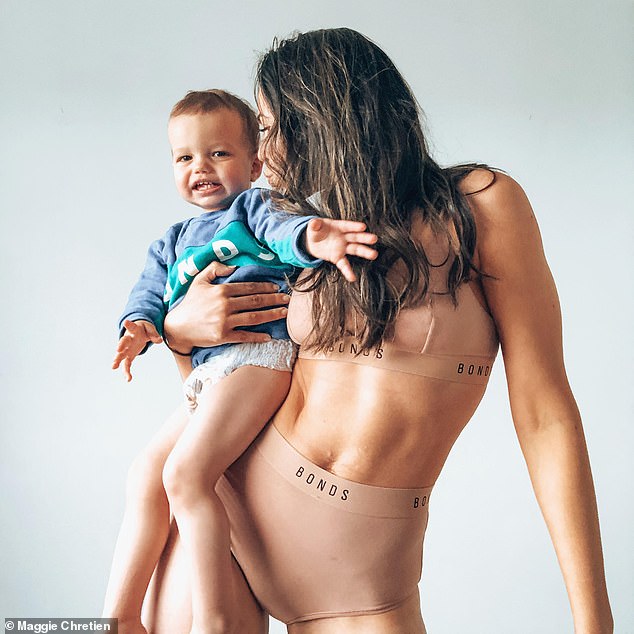 Repeat above four times. To keep yourself accountable, time how long each set takes you and try to beat it each time

It took her 12 weeks to lose 28.5cm all over her body and six months to shed 23cm from her waistline.

‘I now focus more on my measurements and progress shots. I didn’t cut out any foods, that’s the beauty of it, you don’t have to. It’s about incorporating foods you love. That’s what makes it so sustainable.’

After one year of flexible dieting, she consumed 691,600 calories, ‘inhaled’ 43kg of ice cream, attended 208 gym sessions and drank 390 litres of water.

She now exercises anywhere between one to four times a week and counts her macros rather than follow strict diets.

‘There’s no such thing as a “guilty pleasure” because I know how to fit it into my daily macros and calories now so there is no guilt,’ she said.

‘I’m really proud of the physical and mental journey I’ve been on. Self love is such a journey, and not every day is a good day, but I’ve never felt like this before, I’ve never felt this kind of happiness before.’

She said her story isn’t about her ‘before and after’ transformation, it’s just ‘two stages of my journey as a mother’.

‘And if a Melbourne mum of one who had a shocking relationship with food can do it, you can too.’

The boxes include must-have items like loo roll, pasta, rice, tea and coffee. 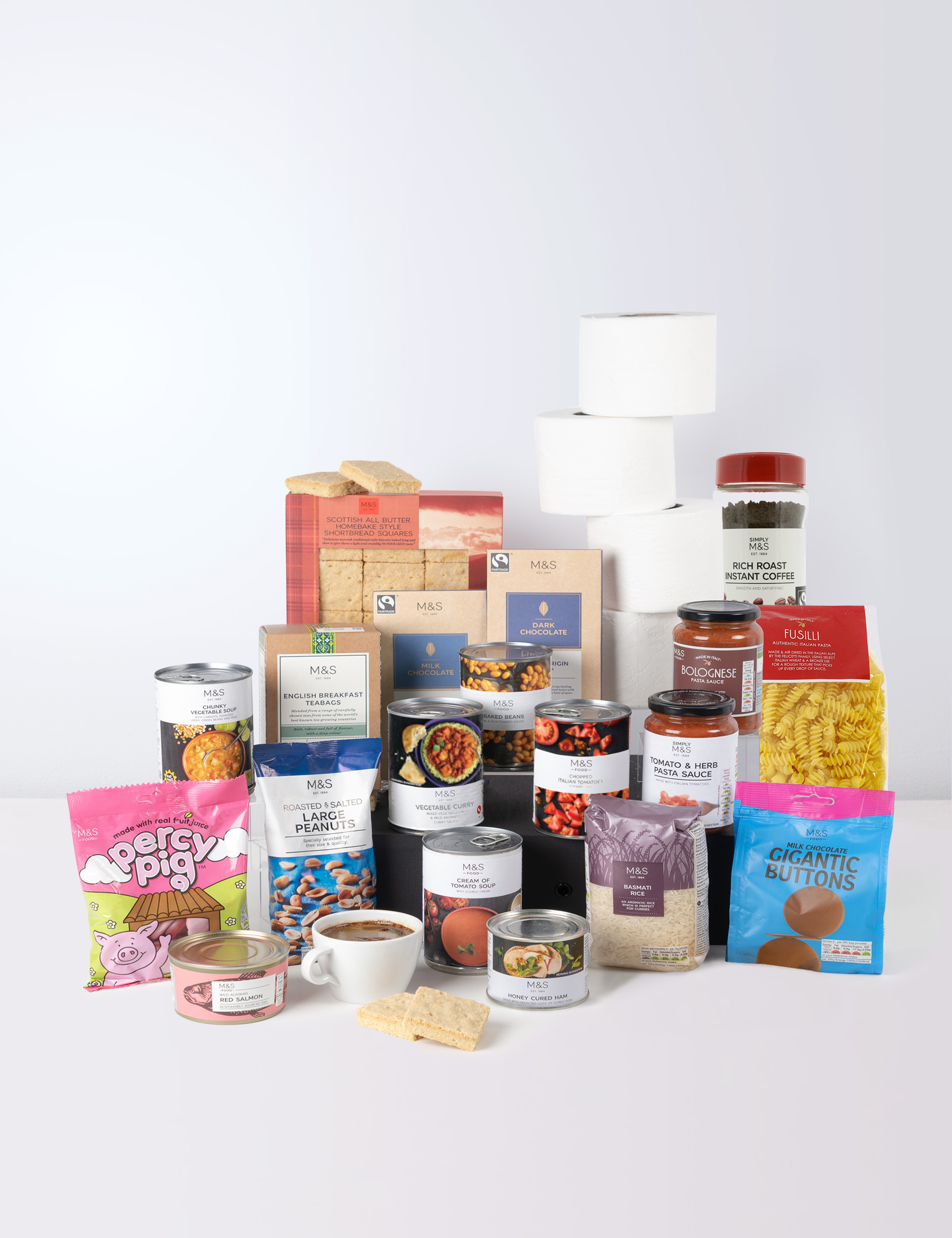 There are two boxes – a vegetarian one (£30) and one with meat and fish (£35) – and you can order them online at MarksandSpencer.com.

Although, it appears the vegetarian one is currently out of stock but shoppers should keep checking back.

Delivery costs £3.99, so remember to factor this in when you're working out if the box is good value or not.

The boxes also contain treats such as large chocolate buttons and Percy Pigs.

Priority is being given to over 70s with a Sparks card so that M&S can identify their age.

But they are available to order online and currently in stock, although limited to one box per customers.

It follows the success of a similar box launched by Morrisons last week that sold out within minutes of going online.

CORONAVIRUS CRISIS – BE IN THE KNOW

Morrisons is adding new stock and delivery slots on a regular basis.

M&S has been forced to close shops that doesn't sell food, as they are not deemed essential by the Government.

Supermarkets have been overwhelmed by shoppers stocking up due to the coronavirus crisis.

MUMS are raving about the 30-day Lego challenge which they say is keeping kids entertained for hours each day.

As parents struggle to find activities to fill the days now the schools have closed, the month-long challenge using the iconic bricks is proving a lifesaver for stressed families. 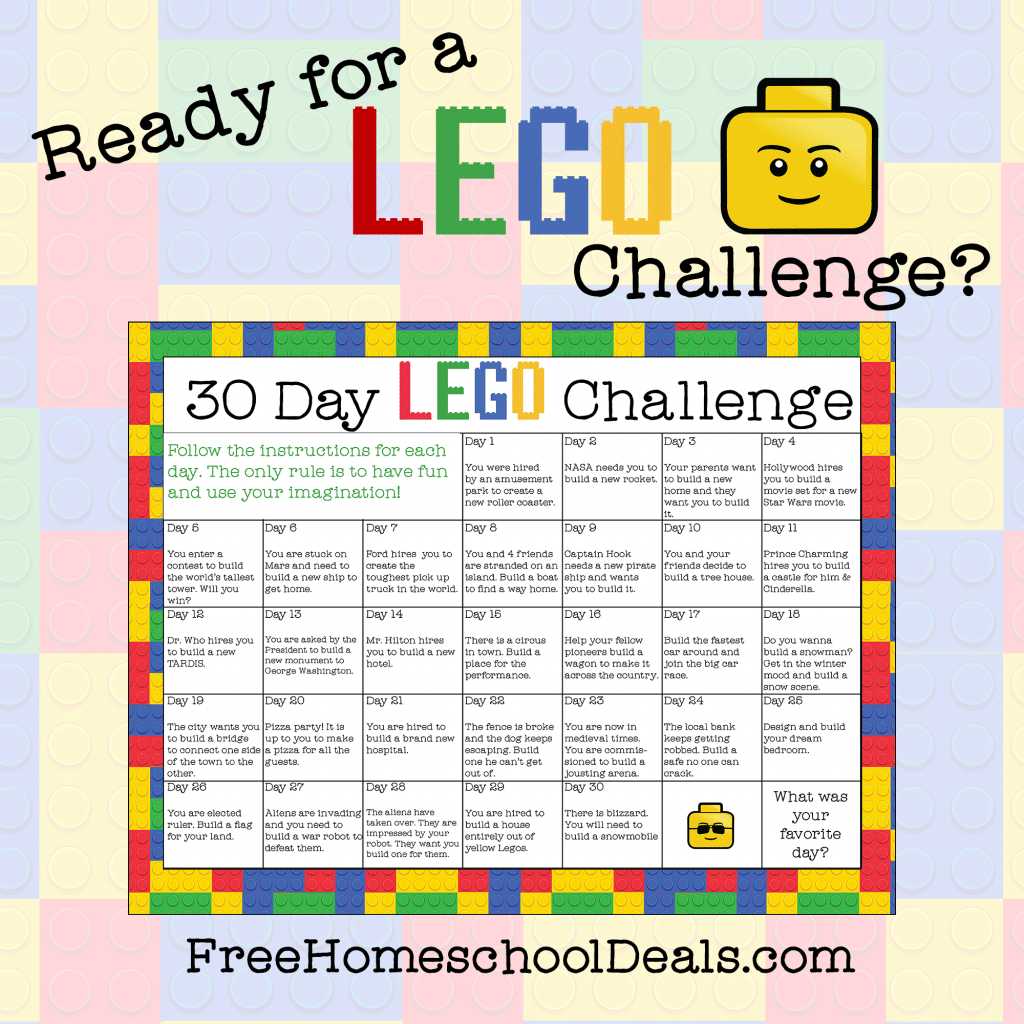 They range from building a new house for the family, creating something from Star Wars, building a hotel, a safe, a rollercoaster and a tree-house among other challenges.

Writing on the website, she hailed the activity sheet, saying: “It's the 30 Day LEGO Challenge that my daughter enthusiastically undertakes for several hours a day in her bedroom. 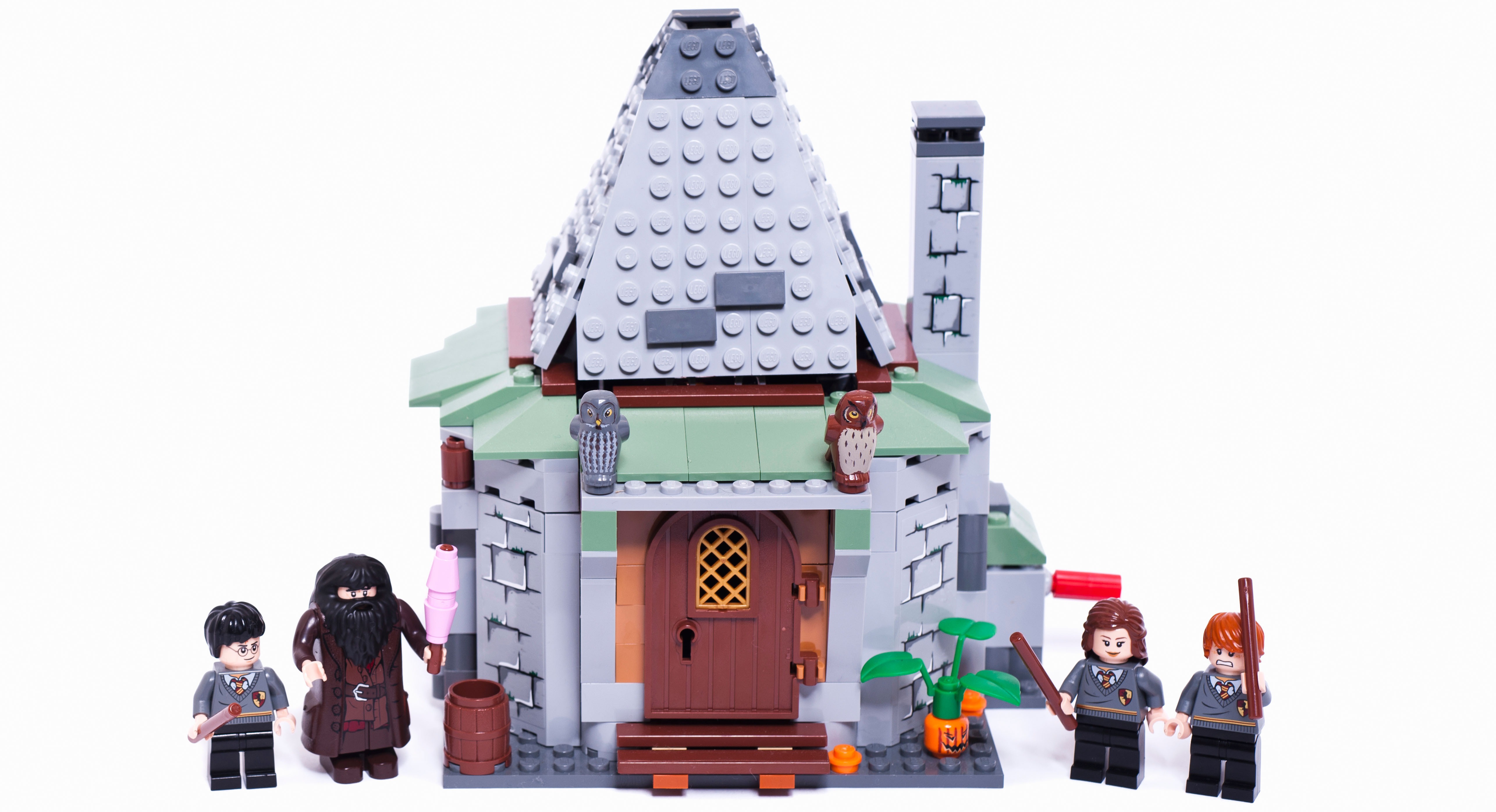 “Let me repeat that SEVERAL. HOURS. A. DAY.

“Yesterday she was squirreled away for two. The day before it was an hour.

“Yes, I'm timing because these are the golden hours in my day where I am not asked for A) Snacks, B) Help with maths I do not understand, and C) My phone to FaceTime her friends.” 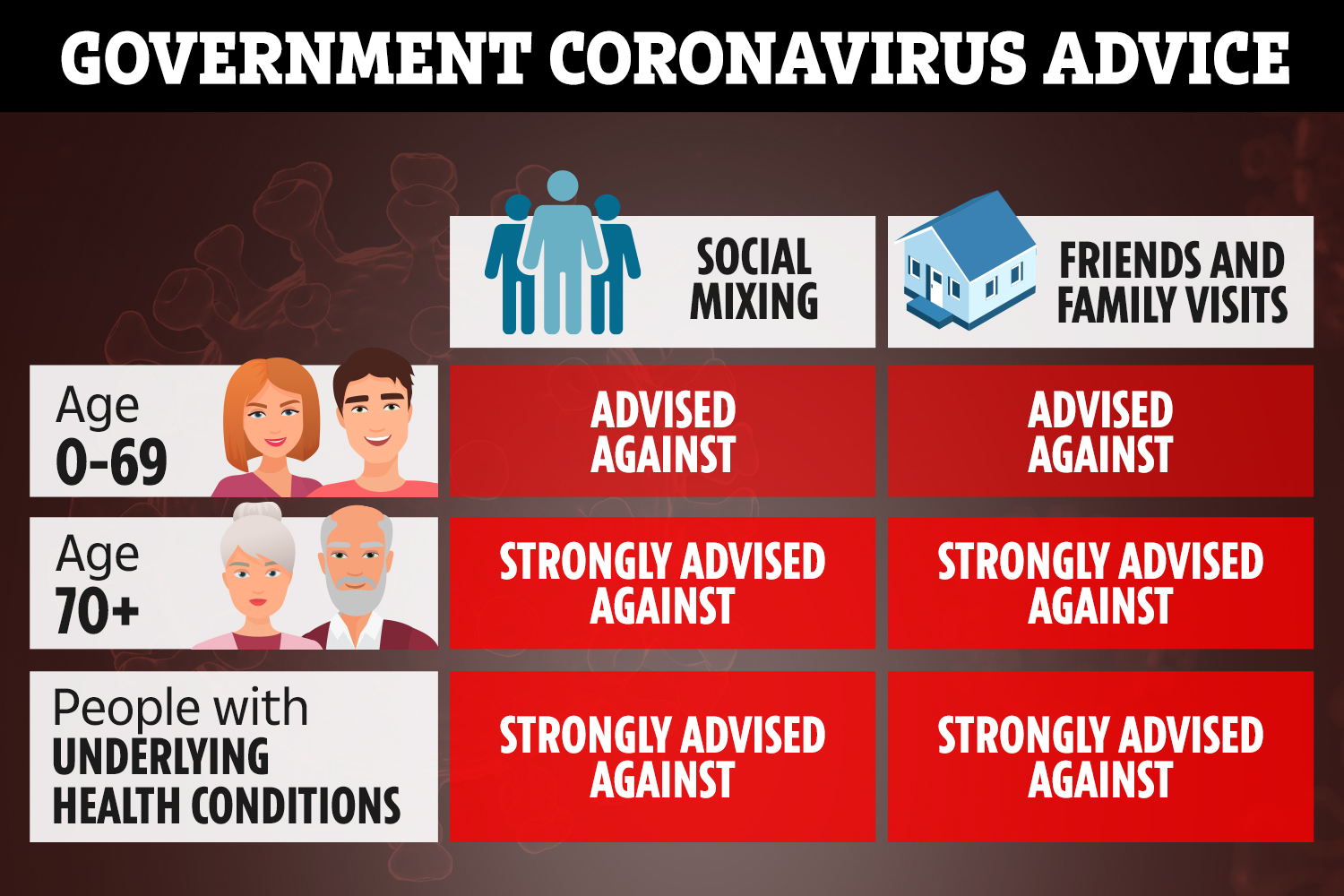 Vanessa spotted the challenge on Facebook, when a fellow mum, Zoe, shared the task sheet online.

Within days hundreds of mum had joined the group and were sharing their kid’s creations.

Zoe said she's received countless messages from fellow parents, with “lots of people” contacting her to say thanks for uploading the Lego challenge.

Meanwhile this mum-of-seven shared the homeschooling regime she’s been doing for years and says 1-3 hours of study is more than enough.

And mums are sharing hilarious memes as they grapple with homeschooling their kids.

While this mum shared her homeschool timetable and people are loving the 3pm ‘mum quits’ section.