AN NYPD officer shoved a female protester so hard onto the ground that she had a seizure and ended up in hospital, in just one of the many violent incidents that took place on Friday night.

One New York councilman called for the officer who pushed Dounya Zayer, a young woman of color, to be charged with assault. 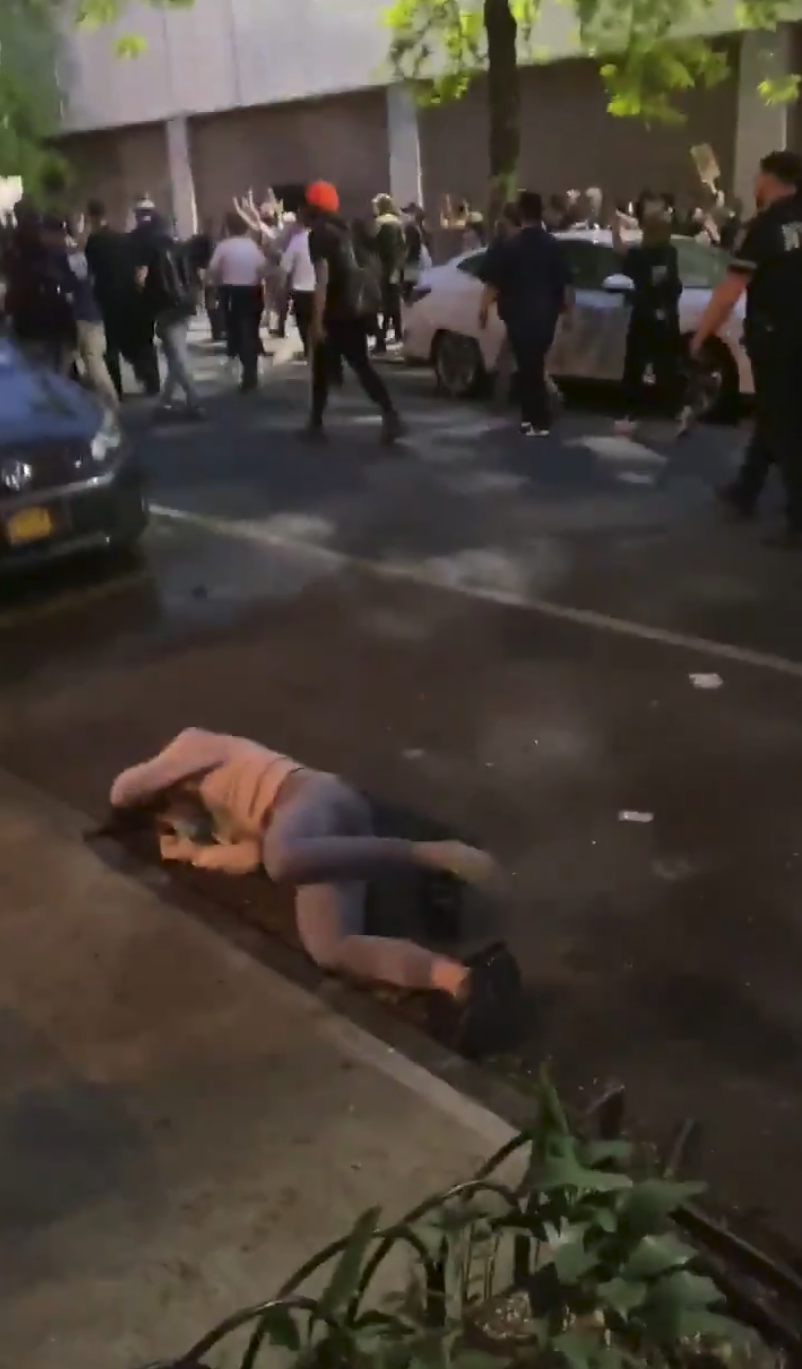 Zayer was marching in one of the justice for George Floyd protests in Brooklyn, New York, when the incident happened.

The officer called Zayer a "f***ing b***h" as he pushed her, according to one reporter, although this can't be heard in the videos posted online.

The cop's actions resulted in Zayer falling to the ground, and having a seizure.

"In no way was I aggressive towards this police officer and in no way did I get in his physical space," Zayer said in a video she posted to social media from hospital. 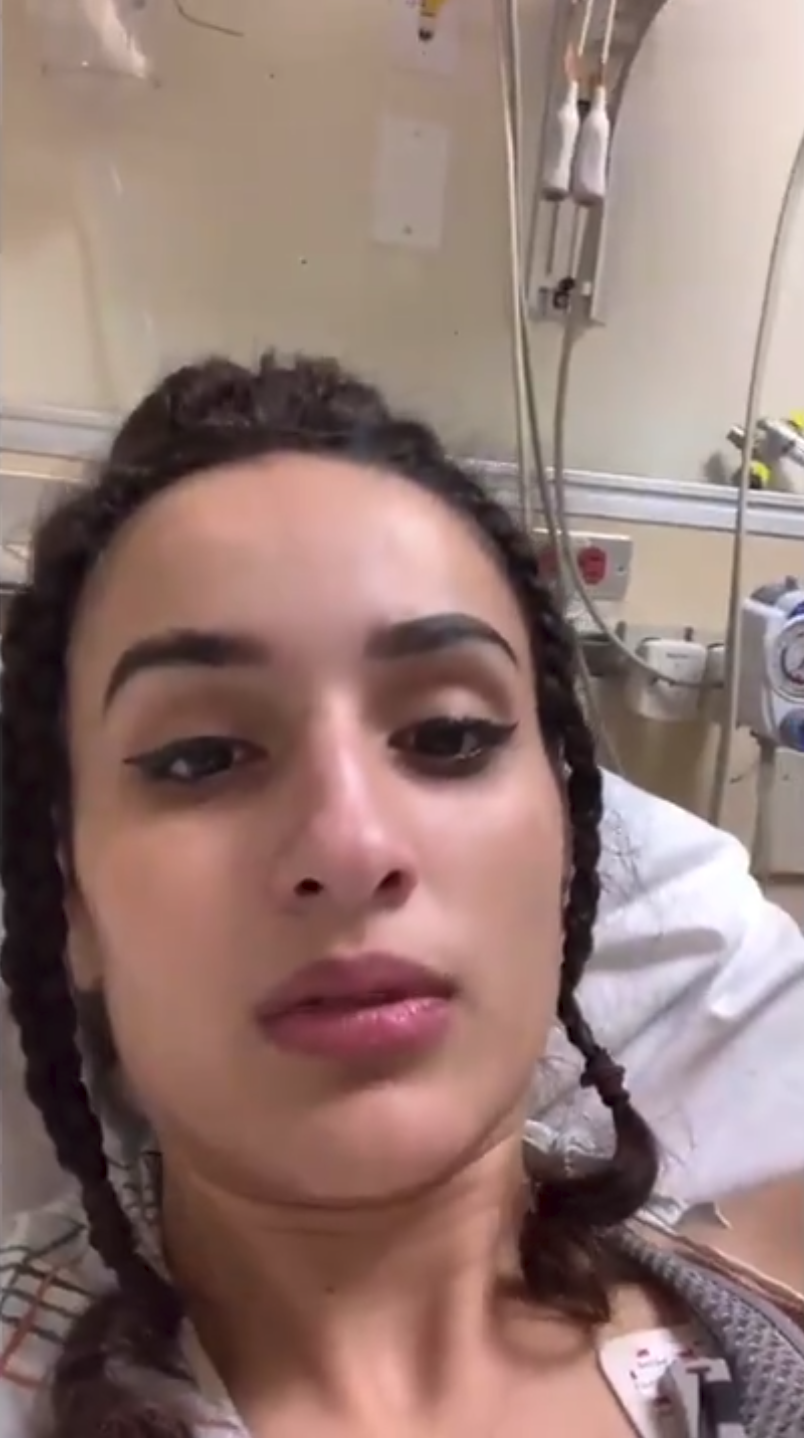 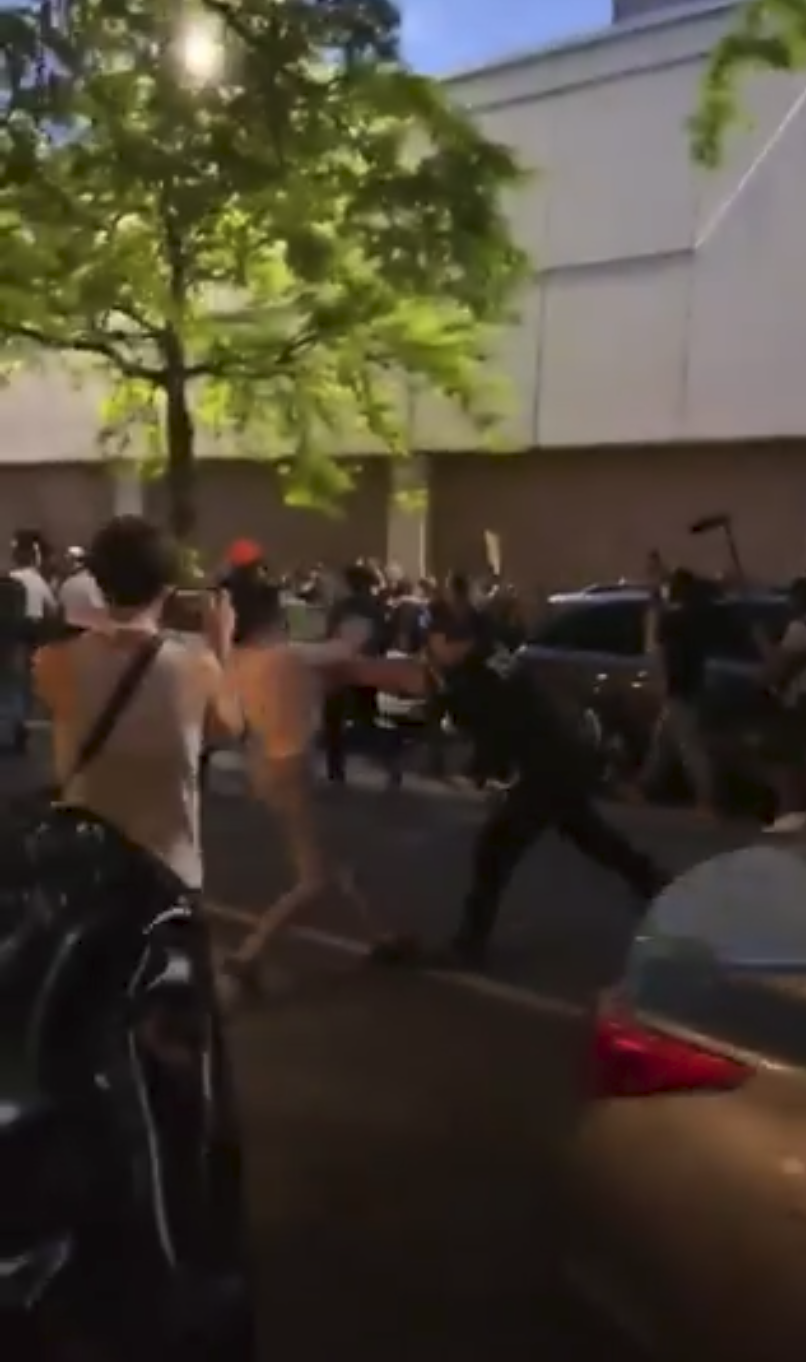 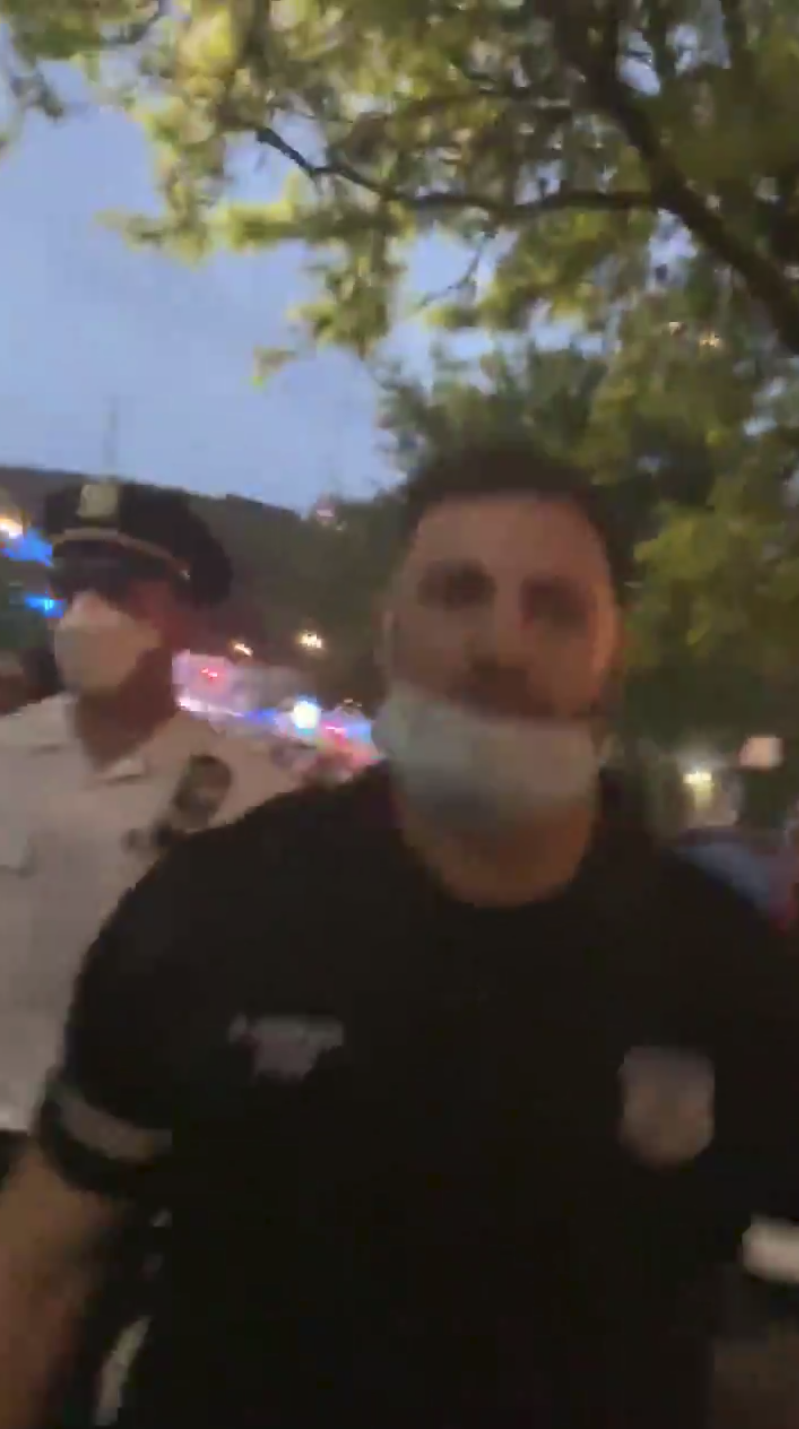 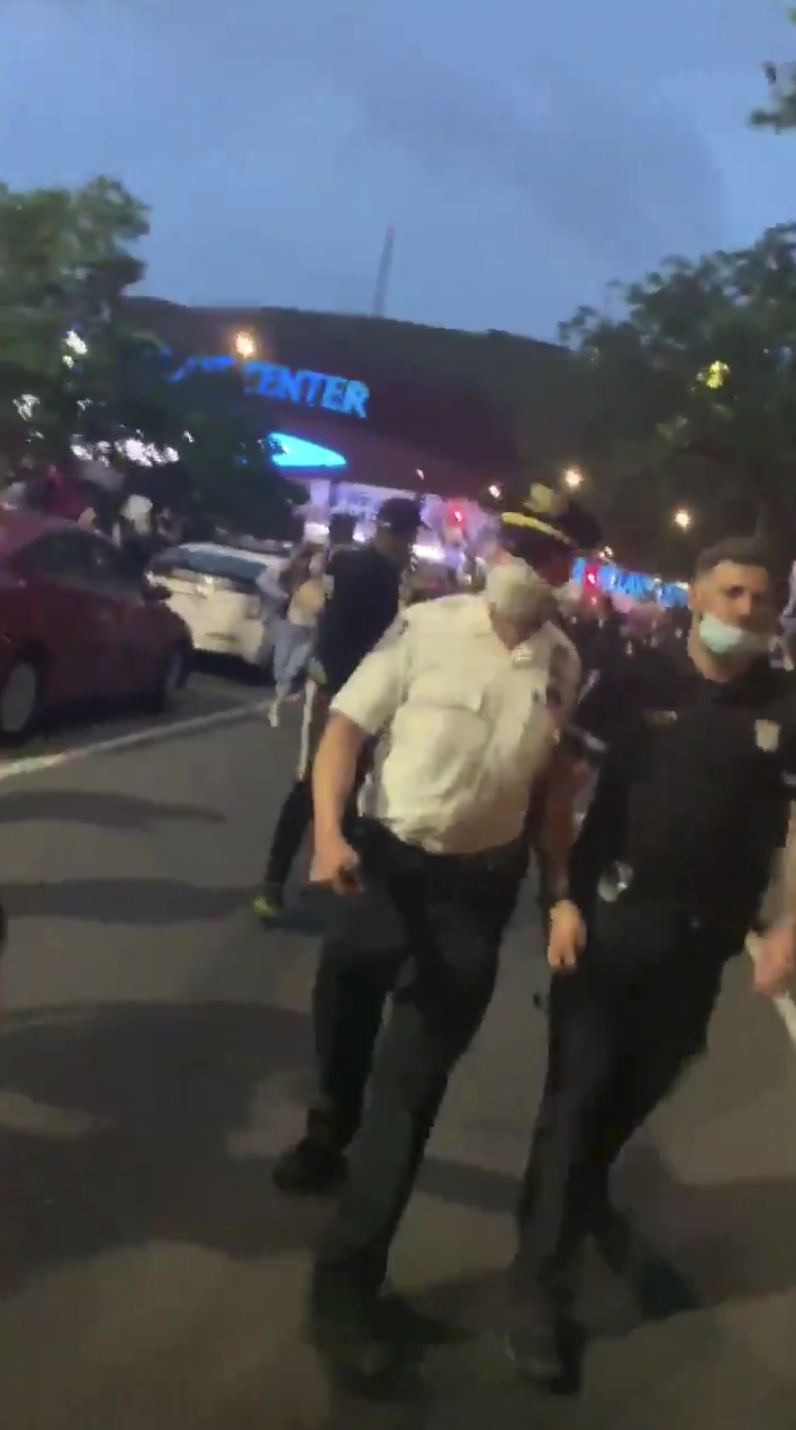 "He was walking in my direction and told me to move. And because I did not move out of his way in time he threw me out of the way."

In another video, which Zayer filmed herself whilst walking backwards, the officer can be seen asking her to "get out of the street".

He then appears to knock her phone out of her hand.

"The guy pushed my phone," she explained in another video. "I asked him why because we were peacefully protesting. There was no reason for him to throw me the way he did."

Corey Johnson, speaker of the New York City Council, said the officer "needs to be charged with assault."

"Hard to watch," Johnson commented on the video. "Brutal and unacceptable."

Zayer told NBC News she was released from the hospital early Saturday with a concussion. 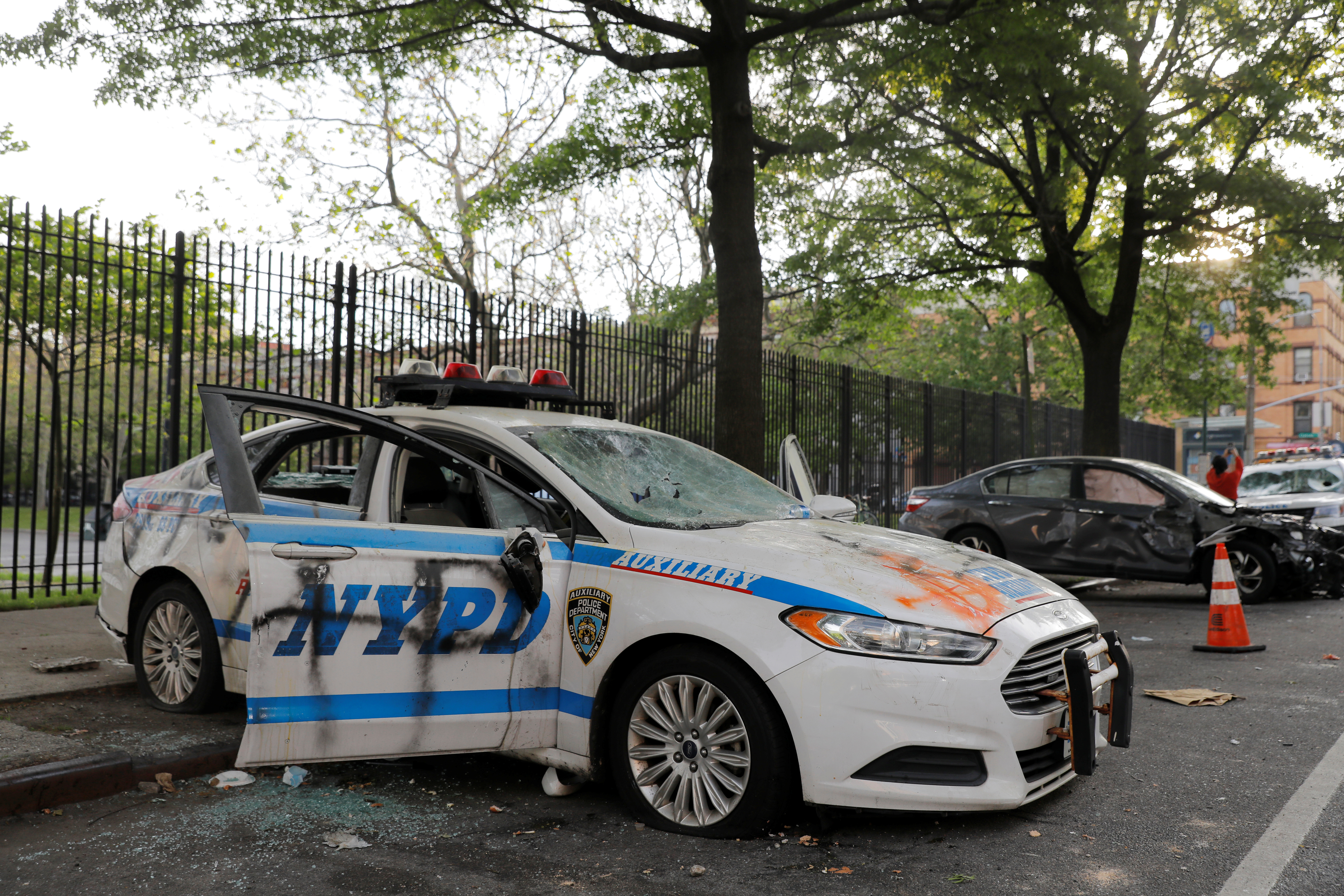 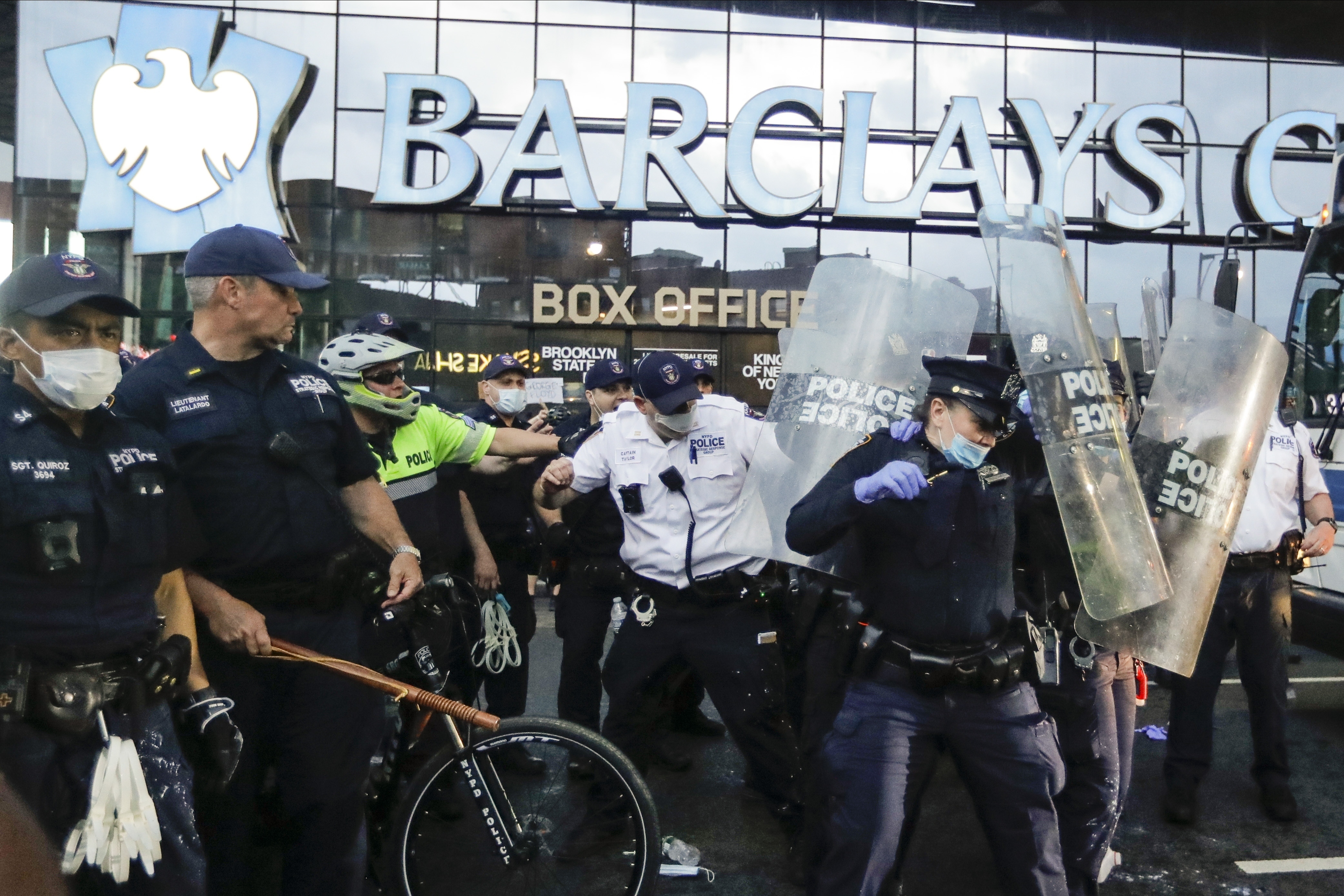 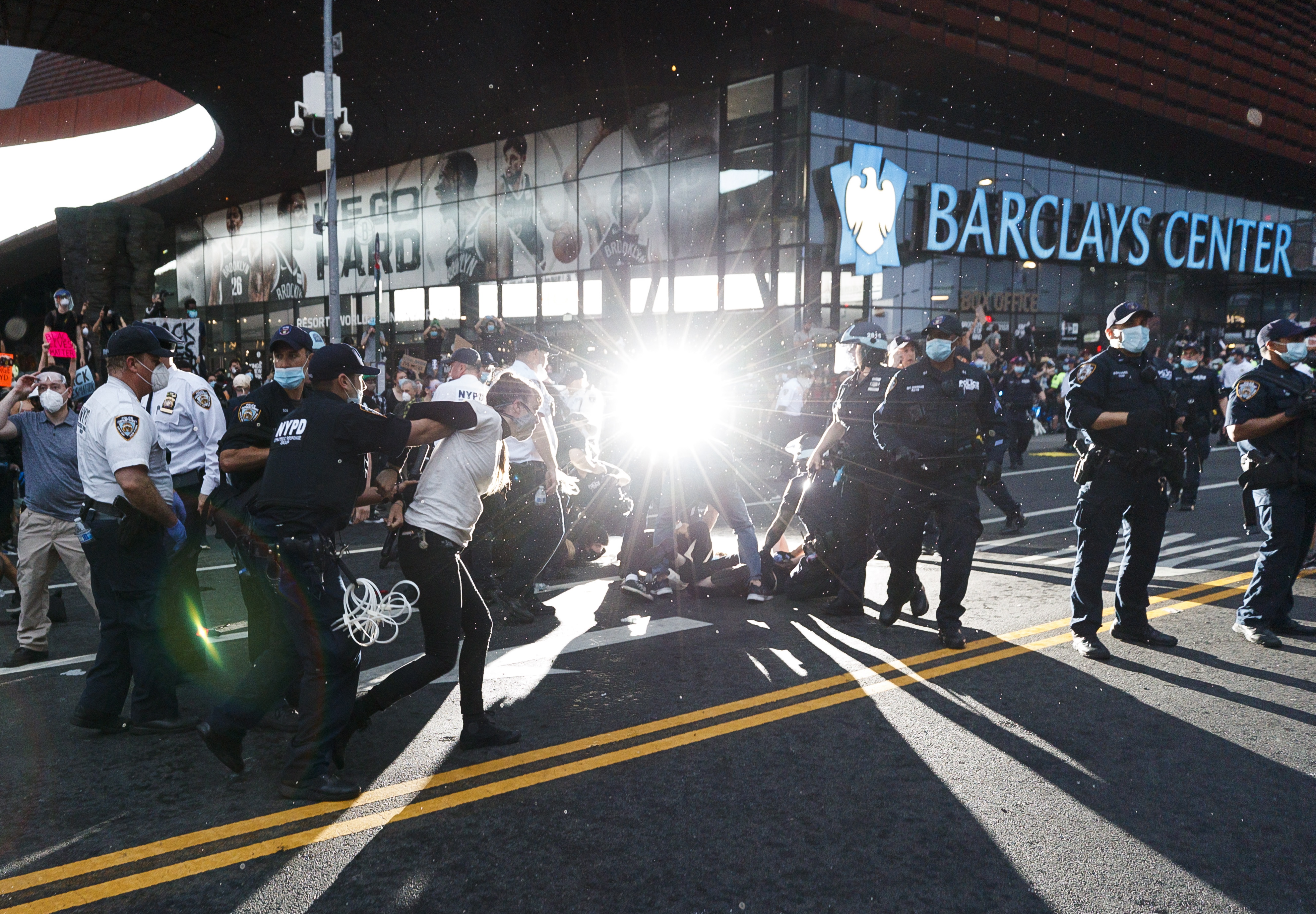 The NYPD confirmed at least 200 arrests were made including two women detained after one threw a Molotov cocktail at a police van, according to NBC.

"It's tough to practice de-escalation when you have a brick being thrown at your head," Shea said.

He added a number of officers had teeth knocked out Friday night and others were in the emergency room as of Saturday morning. He described the protest at Foley Square as peaceful while the protest at Barclays Center was "a well planned, orchestrated protest" designed "specifically to cause mayhem." 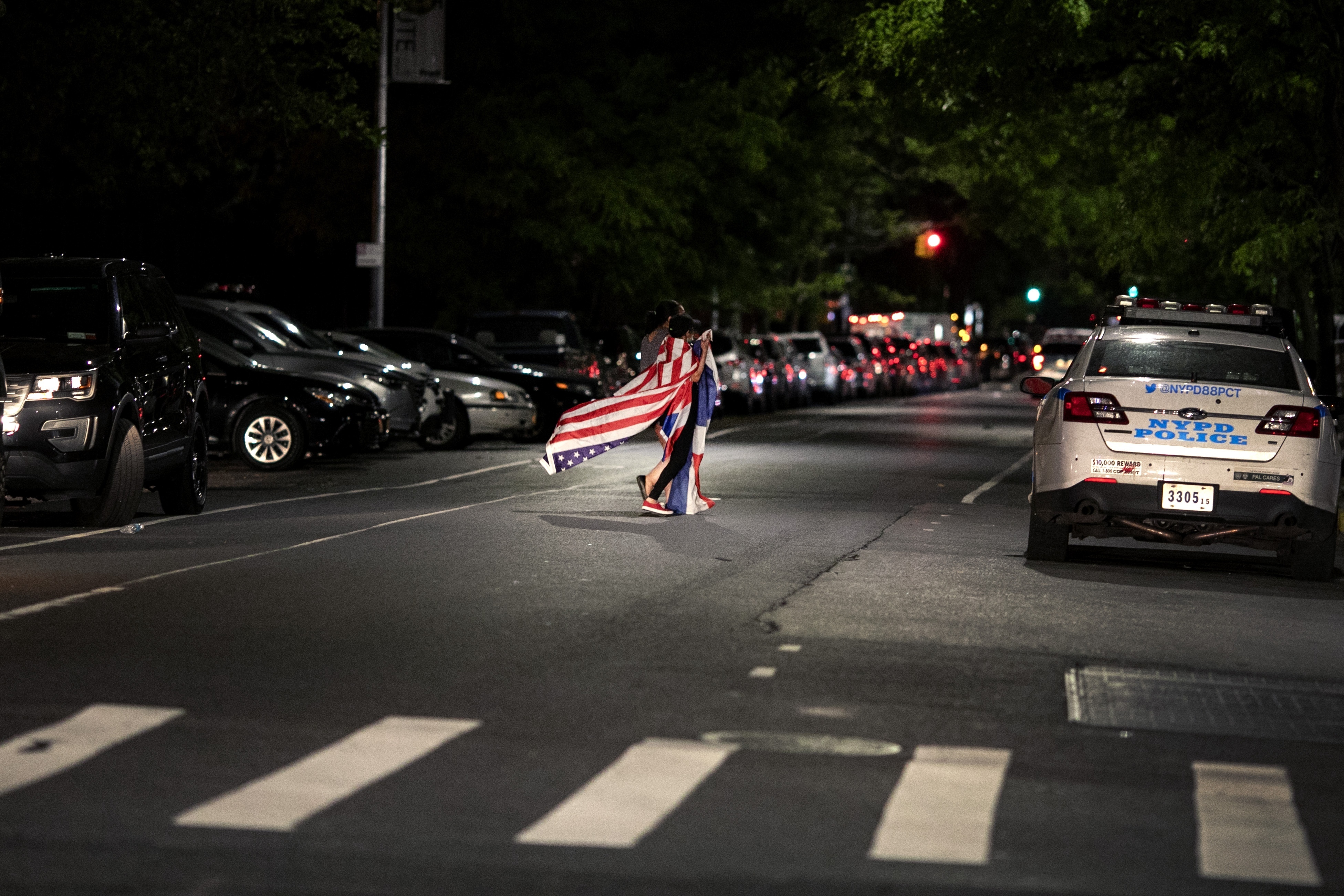 "Last night there were protest[s], and they brought up a lot of issues we need to address. It is the NYPD obligation to find the best possible way to keep peace, to protect everyone," de Blasio said.

“Any protester that tries to take the humanity away from a police officer and devalue them just because they are a public servant is no better than the racists who devalue people of color and particularly black men in America," the mayor added.

Governor Andrew Cuomo added he had requested that Attorney General Letitia James "review all actions and procedures that were used last night" in a short period and report to the public.

Council Speaker Johnson described the night as a "failure of [NYPD] leadership".

Speaking at a press conference on Saturday, Walz also announced he is fully mobilizing the National Guard for the first time in the state's history.

"Last night is a mockery of pretending this is about George Floyd's death, or inequities, or historical trauma to our communities of color," Walz said.

"Let's be very clear: The situation in Minneapolis is no longer in any way about the murder of George Floyd," he added.

"It is about attacking civil society, instilling fear and disrupting our great cities." 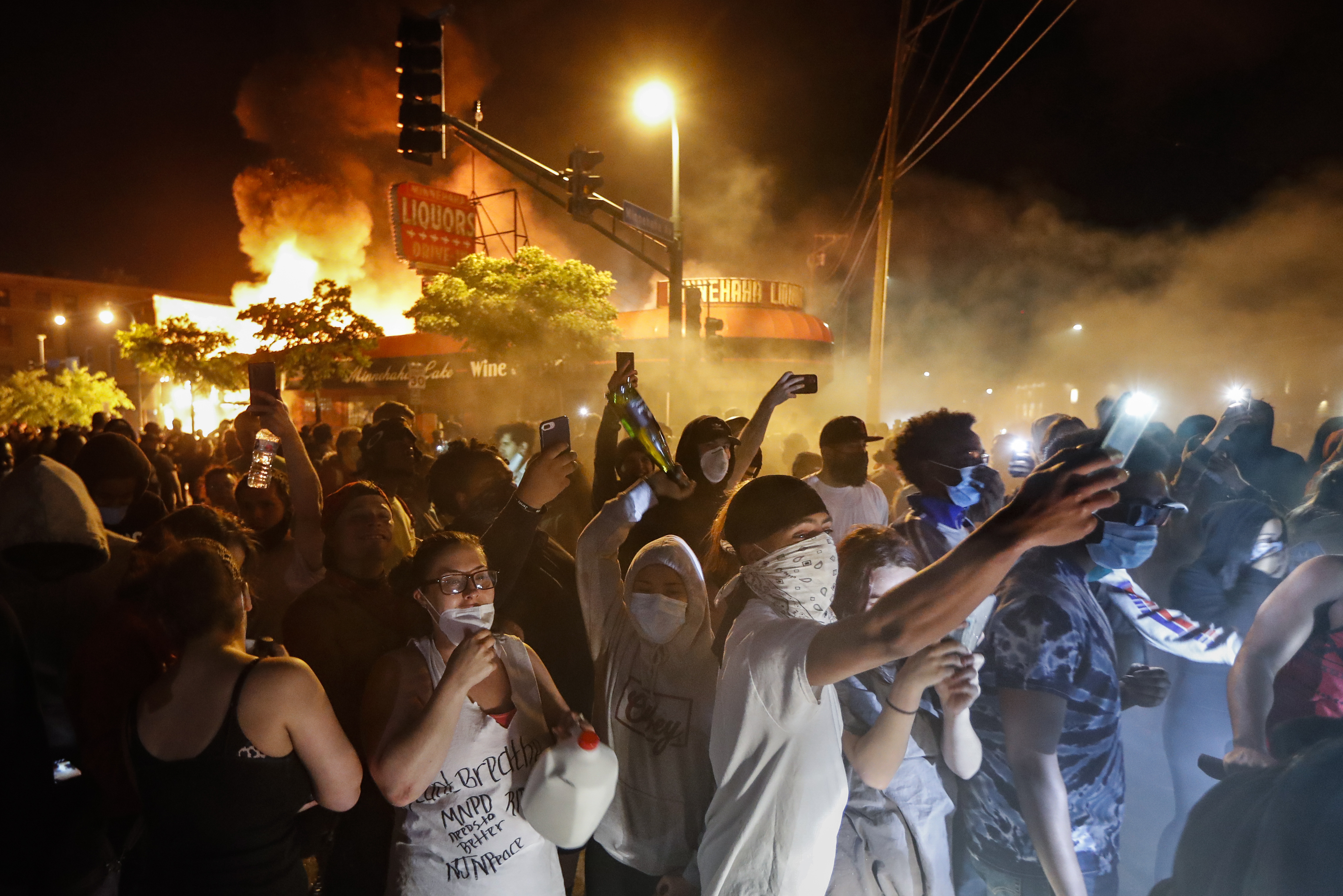 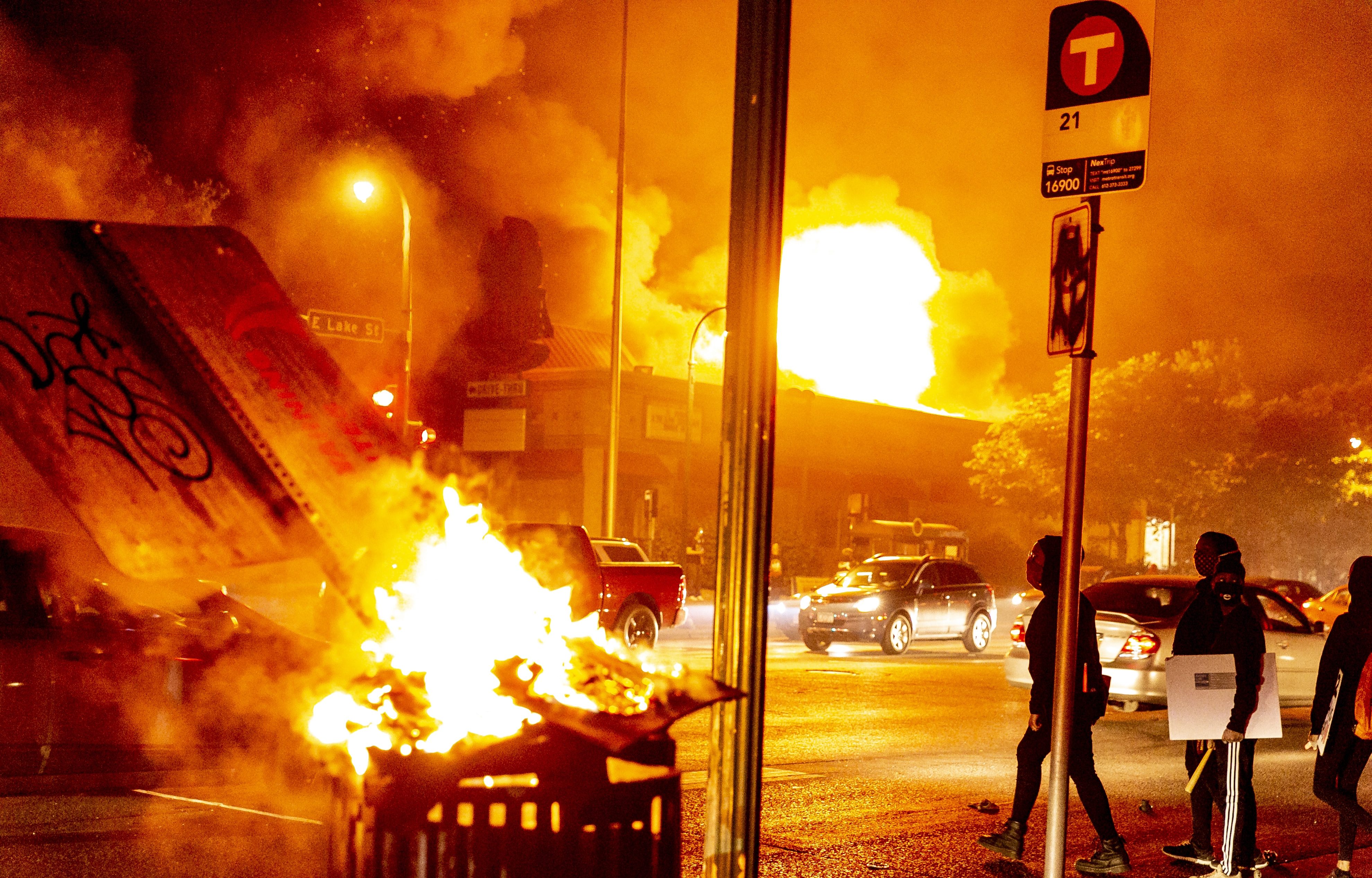 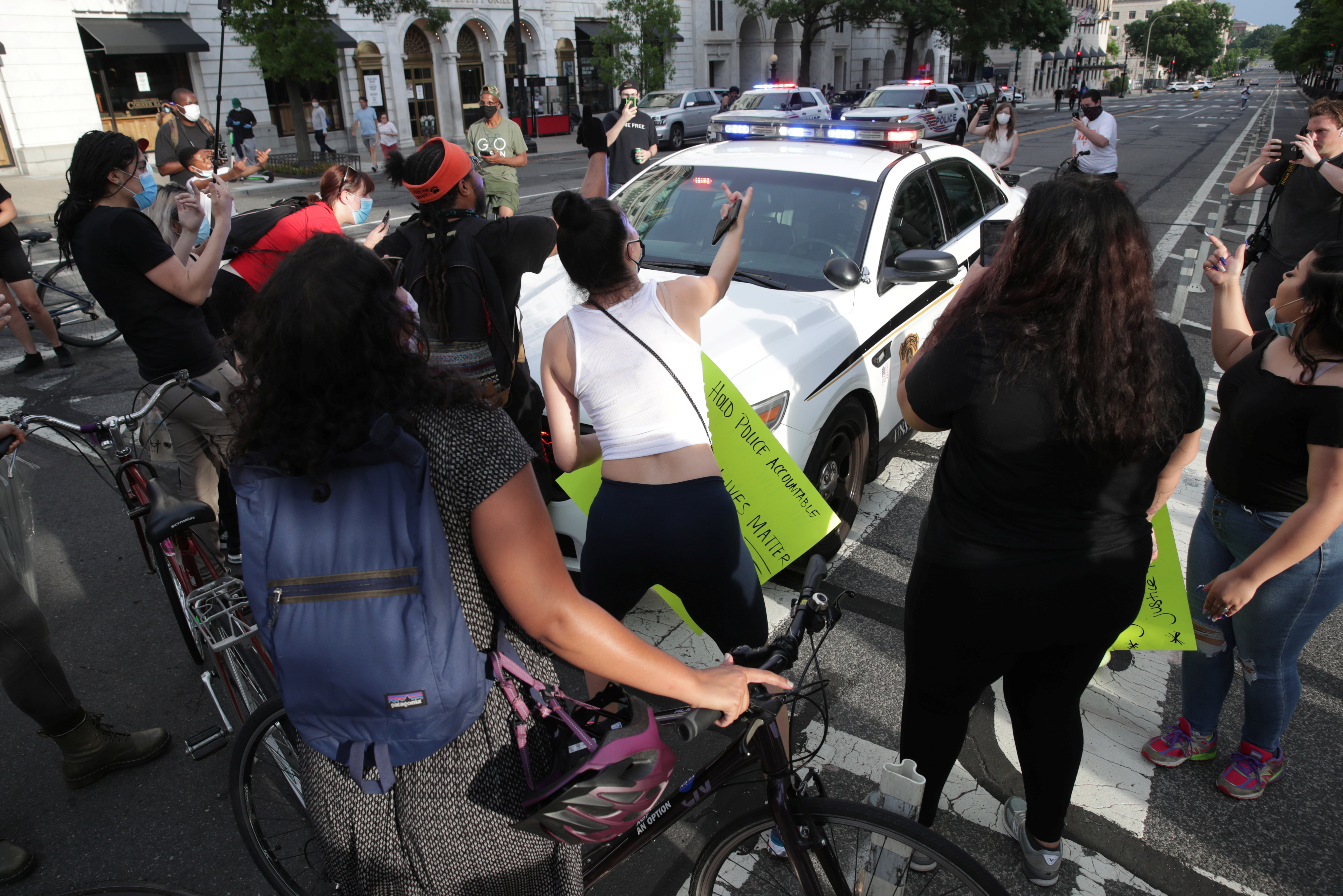 The governor added that protestors intent was just to "destabilize civil society."

He added that the protests "resembles more a military operation" as "ringleaders" move "place-to-place."

Walz said that the state will start releasing data on where the protestors are from.

The governor added that they will figure how protestors are organizing, like if they are using the "dark web."

He said his "best estimate" is that 80 percent are from outside the state – and only 20 percent of demonstrators are from Minnesota. 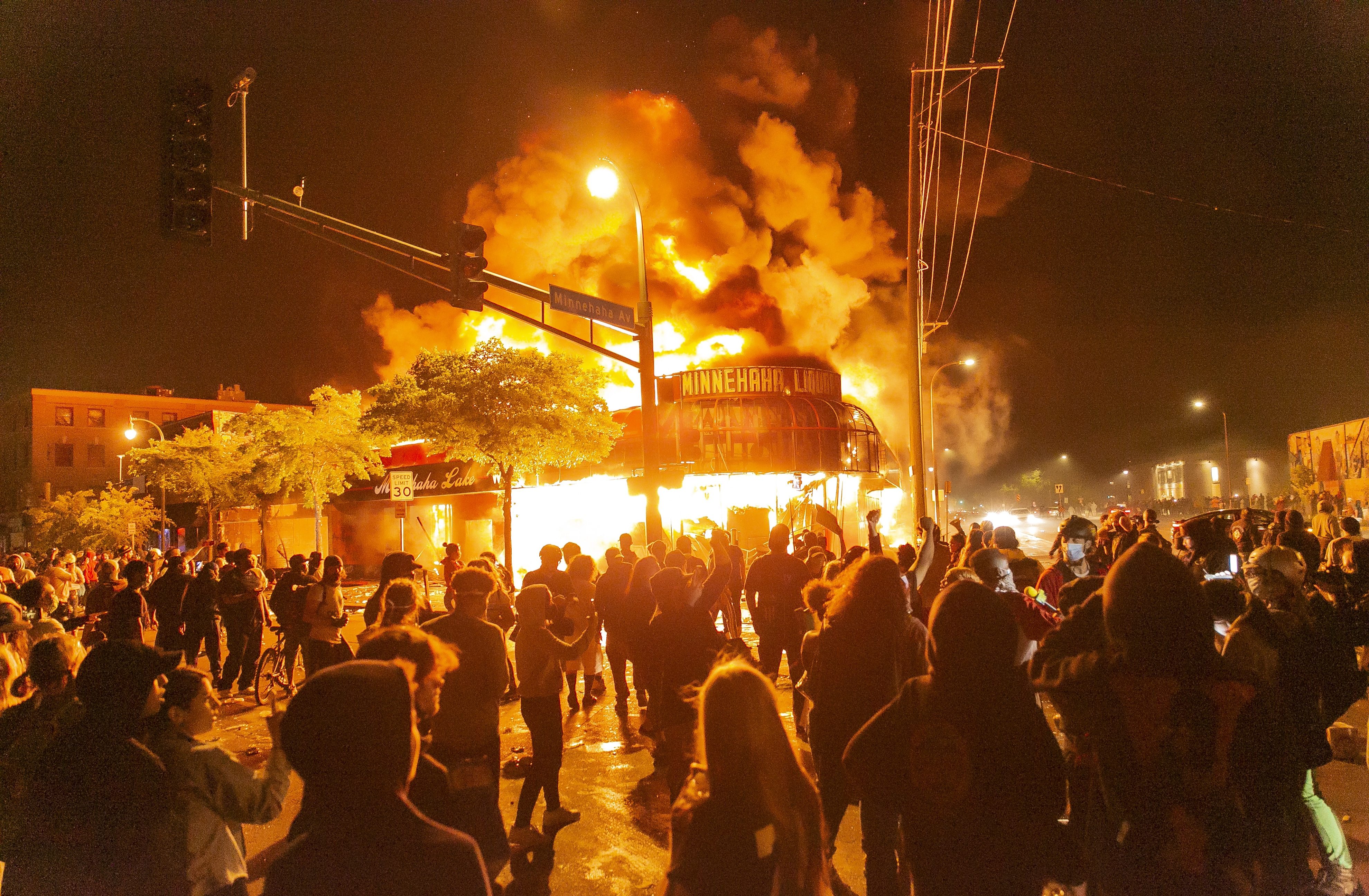 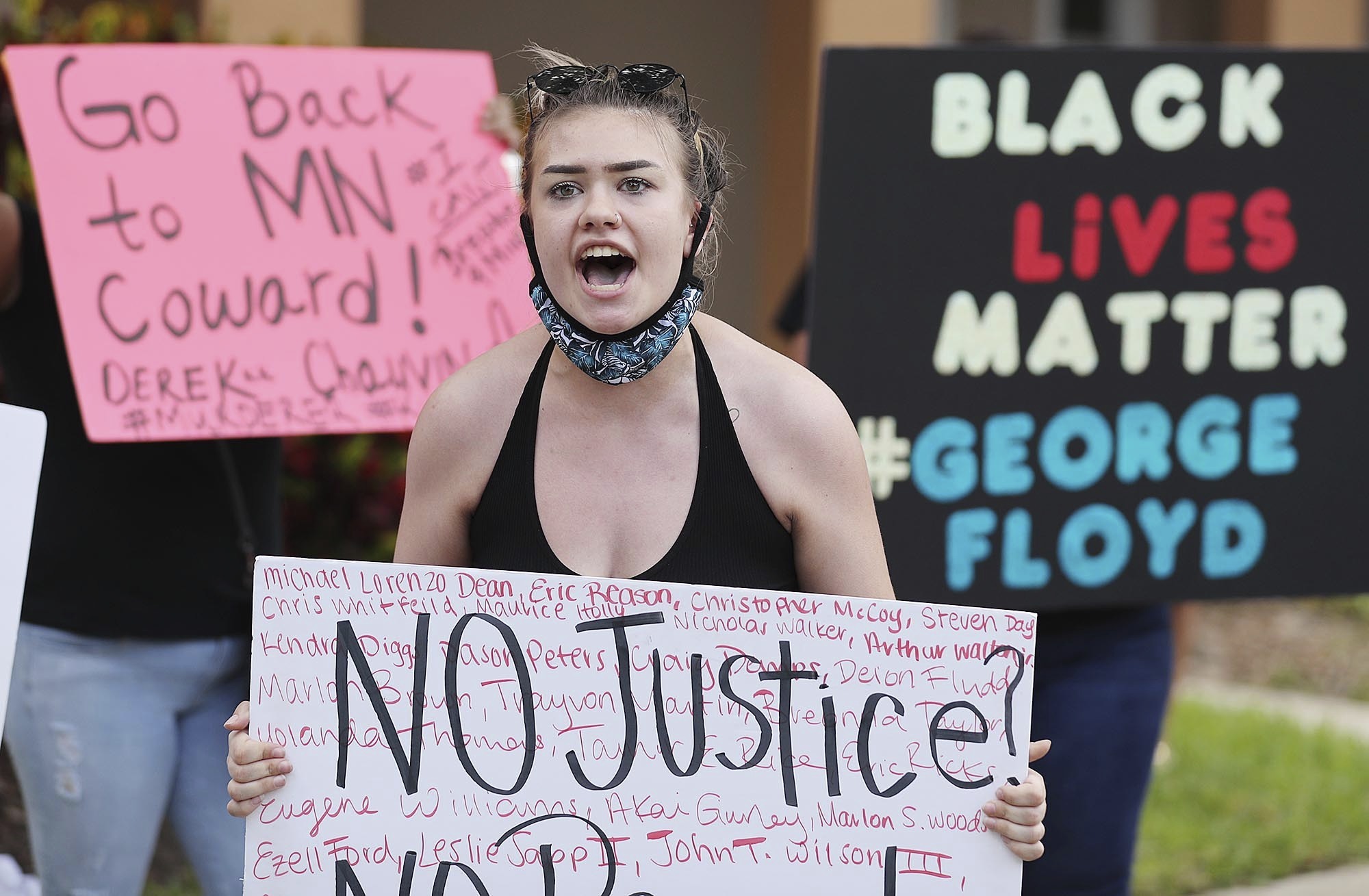 Every person that was arrested last night in St. Paul was from out of state, Mayor Melvin Carter said, as reported by MSNBC.

Walz said last night he believes "white supremacists" and "cartels" were mixing in with crowds of demonstrators.

Protests across the US have grown increasingly violent in recent days as:

Public outrage was sparked after video emerged of white Minneapolis cop Derek Chauvin kneeling for several minutes on the neck of Floyd, a 46-year-old black man.

NYPD Commissioner Dermot Shea got heated as he defended cops from accusations of racism on Wednesday in the wake of controversial social-distancing stops.

“I will also not have my Police Department called a racist police department,” Shea said during a press conference Wednesday morning, his voice oscillating between stern and nearly shouting as he called in to Mayor Bill de Blasio’s daily press briefings.

The NYPD has come under fire over the two weeks following a flood of videos on social media showing violent arrests during social distancing calls and data that show the vast majority of people ticketed or arrested are black and brown New Yorkers.

The enforcement has led to calls from the city’s largest police union, Brooklyn Borough President Eric Adams and Public Advocate Jumaane Williams for the NYPD to get out of policing the mayor’s executive order.

City council members joined parents and activists Monday in calling for an NYPD hiring freeze and other measures to ease Department of Education cuts amidst the coronavirus crisis.

The coalition ripped the DOE budget cuts of over $800 million and proposed other cuts including a freeze on staffing at the NYPD, according to a statement.

Lander argued that the DOE is facing disproportionate cuts when compared to the NYPD.

“If we must freeze hires and not replace retiring teachers, counselors, and social workers, then we should do the same at the NYPD,” he said in a statement.

“We cannot impose more pain and loss on them by cutting direct services, unless we have turned over every stone to find other areas to cut,” said Treyger, the Chair of the Committee on Education.

Mayor de Blasio has taken a sickle to the DOE budget, lopping off entire programs and drawing opposition from activist groups.

Hizzoner has argued that the city’s shutdown has gutted revenue and ripped open gaping budget shortfalls that require painful cuts across departments.

Activists also called for a check on the DOE’s administrative spending and ballooning outlays on consultants.

“The Mayor wants to make egregious cuts to schools instead of eliminating wasteful contracts of over $700 million for busing we’re not using, professional development that’s not happening, and consultants who are doing who knows what,” said Leonie Haimson, founder of Class Size Matters, a parental advocacy group.

Shino Tanikawa of Community Education Council 2, a parental advisory board, argued that kids traumatized by the pandemic will soon be in dire need of services.

“All students will require a great deal of social emotional support in the coming months and well into the next school year,” she said.  “We must refocus our priority on education and wellbeing of the most vulnerable students.”

The man shot by NYPD cops in the Bronx after threatening the officers with a knife early Wednesday morning told police he has coronavirus and was attempting to commit suicide by cop, authorities and sources said.

Ricardo Cardona, who was shot near the corner of Zerega and Westchester avenues in Westchester Square at about 4 a.m., said he tested positive for the virus yesterday, sources said.

Cardona feared he was going to die because he was overweight and diabetic, according to sources.

He allegedly called 911 to report a person with a weapon and had poured ketchup on his knife to make it appear bloody before cops arrived.

He was taken to NYC Health and Hospitals/Jacobi in stable condition. Neither of the cops was injured.

A retired NYPD officer was shot during a standoff with police on Long Island, cops said Thursday.

The incident unfolded just before 2:20 p.m. Wednesday when Christopher Malerba allegedly threatened to shoot cops after they responded to a 911 call for a man making homicidal and suicidal statements, police said.

The 49-year-old Malerba barricaded himself in his Bailey Road home — at one point coming out and pointing his rifle at officers, who shot him, according to police.

Malerba, who was shot in the hand, ran back into his house, cops said.