As the show leaves streaming services, look back on the most memorable guests of Jerry, Elaine, George and Kramer. 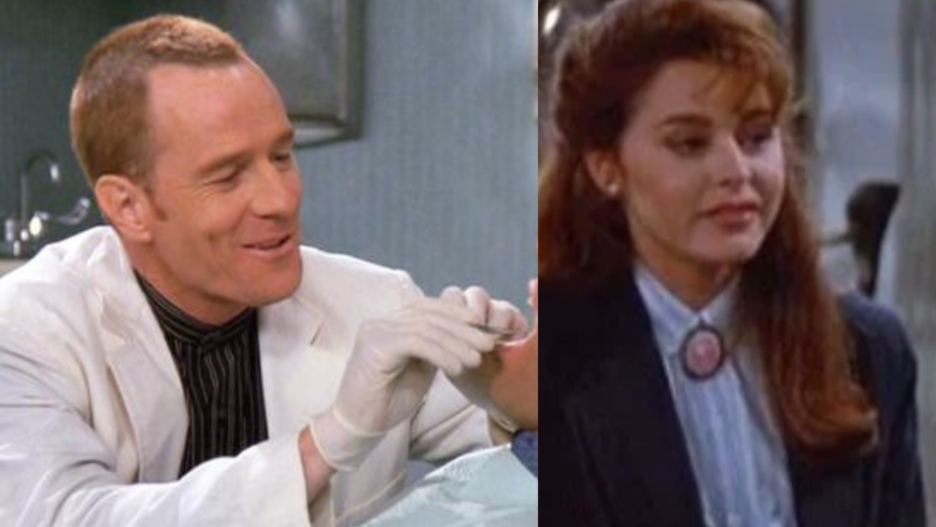 “Seinfeld” will disappear from Hulu in late June 2021 before heading to to Netflix — leaving an indefinite amount of time to be unavailable for streaming. In the meantime, check out the show’s best guest stars, from Bryan Cranston to Kathy Griffin.

Bryan Cranston, “Tim Whatley”
Before he was Walter White, Cranston played a dentist with a thing for Elaine. He converted to Judaism for the jokes.

Phil Morris, “Jackie Chiles”
A clear spoof of Johnny Cochran, the fast-talking Chiles found himself involved in several hair-brained lawsuits, usually involving Kramer. He defended the gang in the finale.

Wayne Knight, “Newman”
Jerry’s nemesis and downstairs neighbor was not a very adept mailman. But as a buddy of Kramer, he often was embroiled in something that the gang was doing. No one said “Hello” with more venom.

John O’Hurley, “J. Peterman”
One of Elaine’s many bosses — and possibly the zaniest. Peterman was a bit of an idiot, whose dumbest move may have been leaving his magazine in Elaine’s incapable hands.

Patrick Warburton, “Puddy”
One of Elaine’s many boyfriends — and possibly the zaniest. David Puddy and Elaine were on-again/off-again for 10 episodes. He also wore the best jacket in the show’s history: the leather “8-ball” coat.

Danny Woodburn, “Mickey”
Kramer met Mickey while they were both stand-ins on a sitcom: Cosmo for the dad, and Mickey for the kid. A friendship was born that eventually turned into a rivalry on a double date.

Peter Crombie, “‘Crazy’ Joe Davola”
“Crazy” Joe Davola lived up to his name throughout five “Seinfeld” episodes. As is a common theme of male guest characters, he was a short-time flame of Elaine’s. He also sometimes dressed up like a sad clown and beat people up.

Reni Santoni, “Poppie”
Poppie not only got sloppy, but he also practiced poor hygiene. Do not eat in this man’s restaurant.

Keith Hernandez, “Keith Hernandez”
The New York Mets star played himself on the NBC sitcom. He dated Elaine and asked Jerry to help him move. The latter was too much for the sitcom’s protagonist to handle.

Teri Hatcher, “Sidra”
Hatcher, a one-episode girlfriend of Jerry’s, boasts one of the best lines in the sitcom’s run: “They’re real, and they’re spectacular.” She was talking about her breasts, which were in question.

Barney Martin, “Morty Seinfeld”
Jerry’s dad made his mark in this world selling raincoats. The Seinfelds and the Costanzas did not get along.

Liz Sheridan, “Helen Seinfeld”
Mrs. Seinfeld was often kind of just there, never wanting to be a bother to Jerry and always hoping he ended up with a nice girl. That is, until she was charmed by Elaine’s “close-talker” boyfriend, Judge Reinhold, who narrowly missed this list.

Estelle Harris, “Estelle Costanza”
George’s mom had a shrill voice that surely helped drive her son away. Still, she was somehow the sane one in her marriage. Kramer “stopped short” with Estelle while driving, which was her husband’s go-to romantic move.

Jerry Stiller, “Frank Costanza”
One of the greatest of the many great contributions of Frank Costanza is Festivus, a Christmas-time holiday “for the rest of us.” Festivus was not over until someone pinned Frank.

Jeanine Garafolo, “Jeanine”
Remember when Jerry was engaged? No? Well it lasted just one episode, and the break-up was mutual. Seinfeld also broke a pact with George when he called off the marriage.

Kathy Griffin, “Sally”
Sally turned on her mentor Jerry in a one-woman show that earned her rave reviews. In real life, Griffin has done just fine for herself without material about Seinfeld.

Steve Hytner, “Kenny Bania”
Bania was a hacky comic in a show that originally centered heavily around Jerry Seinfeld’s stand-up comedy career. At some point Bania became a protege of Jerry’s, cashing in on a killer Ovaltine bit.

Sandy Baron, “Jack Klompus”
Klompus served on the Del Boca Vista condo association board, where Morty and Helen lived. Eventually, Kramer would run for the board as a puppet candidate.

Ruth Cohen, “Ruthie Cohen, Monk’s Cashier”
Cohen, the cashier at the gang’s favorite diner, actually appeared in more than twice as many episodes than anyone else outside of the Big 4, with 101.

Frances Bay, “Marble Rye Woman”
Bay appeared in a few “Seinfeld” episodes, most famously as the woman that Jerry robbed on the street for her loaf of marble rye bread. But it was all in the name of helping George out.

Mark Metcalf, “Maestro”
The Maestro insisted on being called “Maestro” because he was a maestro. This prompted Jerry to insist that Elaine call him “Jerry the Great” because he’s great.

Jane Leeves, “Marla”
Reeves appeared on “Seinfeld” right around the same time that her sitcom “Frasier” joined NBC’s lineup. Marla was a virgin who played a heavy role in the classic episode, “The Contest.”