Bachelor in Paradise has been complete chaos this season, and it’s only been three episodes. Like, I’m still wrapping my mind around Romeo’s tragic attempts to find his Juliet, and don’t even get me started on what the crabs on this beach are going through right now.

On top of all ^ that ^, the BiP cast is already getting mixed up by Jesse “Every Bachelor Lead Looks Exactly Like Me” Palmer, and this week Victoria Fuller wandered onto the beach. And while Victoria initially asked Justin Glaze on a date (causing Genevieve Parisi to spiral), she and Johnny DePhillipo eventually bonded on a day bed that has truly seen. some. things. And based on general vibes, it looks like Victoria and Johnny might stay together for the rest of the season? Actually, we know whether or not they do thanks to spoilers, lol.

On that note: please be advised that this article is extremely spoiler-filled, which is probably why you’re here. But if you somehow got lost on the internet and want to remain spoiler-free, we slotted in a gif of a crab, aka one of the many Paradise animals I’m currently praying for. Said crab will show up with a reminder before anything unaired is spilled, so you’ll know when spoilers start!

Reality Steve reports that filming has started on on Bachelor in Paradise—specifically during the week of June 6. Victoria doesn’t show up until day 2 of production, and she gets a rose from Johnny during the first Rose Ceremony. 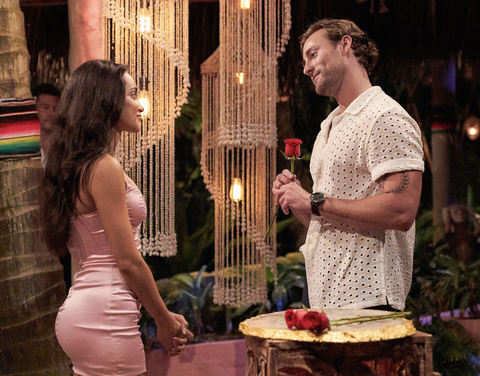 ‘Kay, at this point in the timeline ~spoilers~ are coming, so if you want to remain fully un-spoiled, don’t scroll beyond these traumatized shellfish!

Reality Steve reports that Victoria gives her rose to Johnny. Here’s a sneak peek at next week’s episode, but honestly Victoria and Johnny are barely in it—probably because they’re a pretty solid couple at this point and aren’t involved in the DRAMA.

According to Reality Steve’s reporting on June 28 (when BiP was still filming!), it sounds like Victoria once again gives her rose to Johnny. So yep, they’re serious.

Reality Steve reports that Victoria and Johnny are fully engaged (!!), along with a ton of other BiP couples!

(SPOILERS) Here are your BIP final couple results. Finally got these last night…

A sleepy month where basically nothing happens. Mostly because the remaining Bachelor in Paradise couples aren’t allowed hang out with each other (at least not in public) for fear of spoiling the show.

Bachelor in Paradise premieres! And is fully a mess!

As BiP continues to air on ABC, fans wait for one of the couples to inevitably spoil the fact that they’re together. Hasn’t happened yet, but keep an eye on Johnny and Victoria’s Insta accounts.

‘Til then, we’ll be updating this article as the show progresses, so stay tuned!