This week the latest hit from Netflix, ”Arcane,“ ended the weeks-long run of ”Squid Game“ at the top of Parrot Analytics chart

“Arcane” has entered the arena.

This week the latest hit from Netflix, “Arcane,” ended the weeks-long run of “Squid Game” at the top of Parrot Analytics’ chart of what the measurement company calls the “most in-demand breakout series.” The animated show, which is based on Riot Games’ hit video game “League of Legends” and serves as a prequel to the game, has been able to tap into demand from the existing fan base and also appeal to casual viewers.

The nine-episode show released episodes in separate batches over the past three weeks, a departure from Netflix’s usual all-at-once episode drops. The sustained demand growth for this show points to the benefits of this more gradual release strategy.

The long-awaited “Wheel of Time” adaptation from Amazon Prime Video premiered on Nov. 19 and ranked fourth on the chart, which measures interest in shows that debuted in the last 100 days on a broadcast, cable or streaming network. “Wheel of Time” had 22.7 times the average series demand, reflecting the popularity of the late Robert Jordan’s multivolume fantasy novel series. 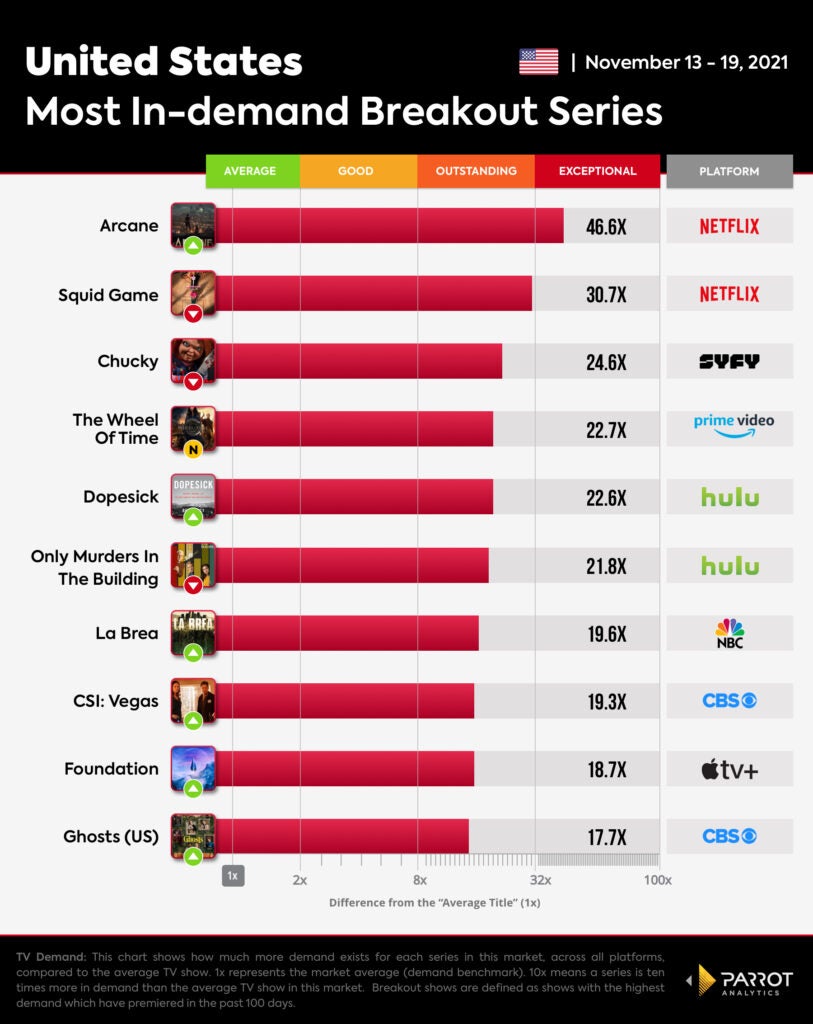 In fact, four days ahead of its premiere, global demand for this show was 13% higher than for “The Witcher” at the same point before its Season 1 premiere. This is a good indicator the show has the potential to be a massive hit for Amazon.

Demand for “Dopesick” was up by 10.8% this week following the finale which was released on Nov. 17. Demand for the Hulu original has remained consistently high throughout its first month as episodes have been released weekly.

Just making it into the Top 10 of new shows this week with 17.7 times the average series demand is “Ghosts,” the new sitcom from CBS. While some shows have engineered successful premieres by adapting video games (“Arcane”) or books (“The Wheel of Time”), “Ghosts” adapted a British sitcom of the same name for American audiences.