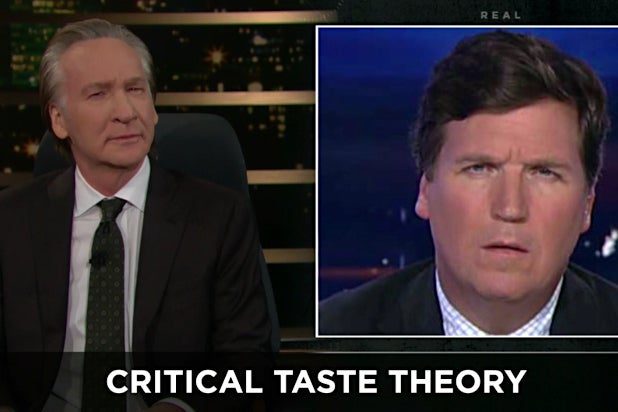 During “New Rules” at the end of Friday’s “Real Time,” Bill Maher took a brief break from the segment’s usual rants to slip in a pretty hilarious insult against Fox News Host Tucker Carlson — by pretty much just accurately summing up Carlson’s whole schtick.

The joke was that one of the “New Rules” topics was a matter of absolutely pointless trivia, but Maher acted as though it was an issue of epic importance. Here’s how it went down.

“New rule: Stop using the phrase plain vanilla. Vanilla is a flavor just like any other, it comes from the vanilla bean,” Maher said, while a caption called “Critical Taste Theory” appeared onscreen. “You know what other flavor comes from a bean? Chocolate. But you don’t hear the mainstream media using the term plain chocolate — but plain vanilla that’s somehow okay, but what is isn’t okay?”

Then Maher ended the gag by suddenly saying “I’m Tucker Carlson Good night,” as a photo of Carlson appeared on screen.

Of course, the whole thing was a parody of how Carlson tends to talk about race — vaguely and broadly, but in terms that critics, even within Fox News, argue convey racist sentiments, for example how he has continually spread falsehoods about the murder of George Floyd. Critics also note that Carlson has had multiple employees with ties to white nationalists, including the former head writer on his Fox News show, and several people at his old website, The Daily Caller. And John Oliver noted on a recent episode of “Last Week Tonight” that Carlson frequently says things that echo white supremacist talking points.

Carlson has consistently denied he is racist.

In any case, the hinge of Maher’s joke is that “Critical Taste Theory” is an obvious pun on the racial justice concept known as “Critical Race Theory,” something Carlson has frequently complained about. You can probably figure out what the vanilla/chocolate part of the joke referred to for yourself.