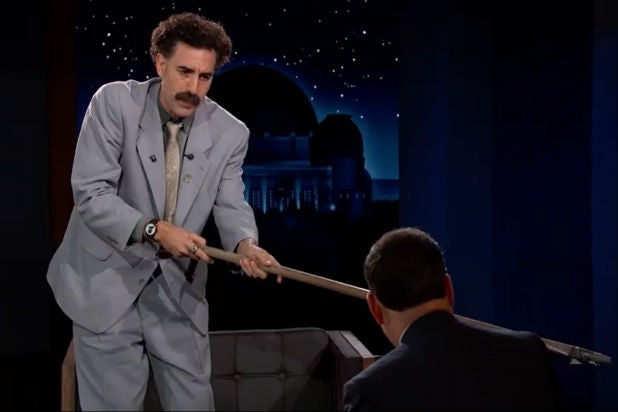 Ahead of the new “Borat” film’s Oct. 23 release on Amazon Prime, Sacha Baron Cohen showed up on “Jimmy Kimmel Live” in character as Borat, where in addition to showing off a clip from the film, he attempted to administer an extremely incorrect kind of coronavirus test to Kimmel.

He also stayed in character the whole time, including displaying Borat’s trademark antisemitism (reminder: Cohen himself is Jewish and uses the gag to satirize racists).

So, as Cohen-as-Borat came out onstage and sat down, he said he wasn’t comfortable beginning the interview until he verified for himself that Kimmel wasn’t sick with COVID-19. This first entailed “basic questionnaire,” which included questions like:

“In the last week, have you been in the presence for more than 15 minutes of any Jews?” Borat asked.

“Yes. All of our writers and none of our camera guys are Jewish,” Kimmel responded.

After confirming that was “very bad,” Borat asked “As a member of Hollywood elite, have you recently drunk any un-pasteurized children’s blood?” which, of course, references a well known antisemitic trope.

“No,” Kimmel said while laughing.

“Really? Not in any pizza parlors recently?” Borat asked, a likely reference to the racist right wing conspiracy theory known as QAnon.

After some more back and forth, Borat then said he needed to do a physical exam — in this case, a temperature check. Except it was a thermometer strapped to the end of a very long stick which Borat threatened to shove into Kimmel’s backside. Watch the whole exchange, including the eventual interview and scene from the movie, above.

Just as the first “Borat” had a wacky long title, so does its sequel, or “Subsequent Moviefilm,” as it’s called. The full title for “Borat 2” is “Borat Subsequent Moviefilm: Delivery of Prodigious Bribe to American Regime for Make Benefit Once Glorious Nation of Kazakhstan.”