During the latest episode of Sunday Brunch, Simon Rimmer was demonstrating how to make a carrot curry salad when he ended up slicing his thumb, making it bleed. However, viewers were left less than impressed when Simon continued with the demonstration before putting a plaster on his cut.

Simon began the dish by slicing the onions before putting chickpeas and ginger into a bowl.

Although, things went wrong when he started grating the carrots.

“I don’t want to alarm you Joe (Suggs), but I’ve grated my thumb,” Simon began.

“If we actually have the standby team on for when I faint.” 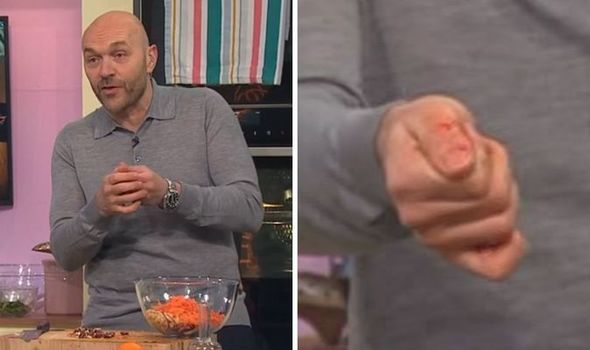 Co-host Tim Lovejoy chipped in: “I think you might actually need to put a plaster on that.”

“I will,” Simon replied as he wiped his thumb on a tea towel.

Taking to Twitter after the segment, viewers were less than impressed after Simon continued to cook rather than waiting for a plaster.

Another commented: “So rather than get a plaster, Rimmer is gonna carry on cooking – as the blood from his thumb continues to drip down his hand!”

In the end, Simon found a plaster underneath the counter as he commented: “Oh, the Hello Kitty ones have gone.”

One fan tweeted: “Carrot curry? Oh, come on no one wants a carrot curry.

“Curry salad is a bridge too far,” another said.