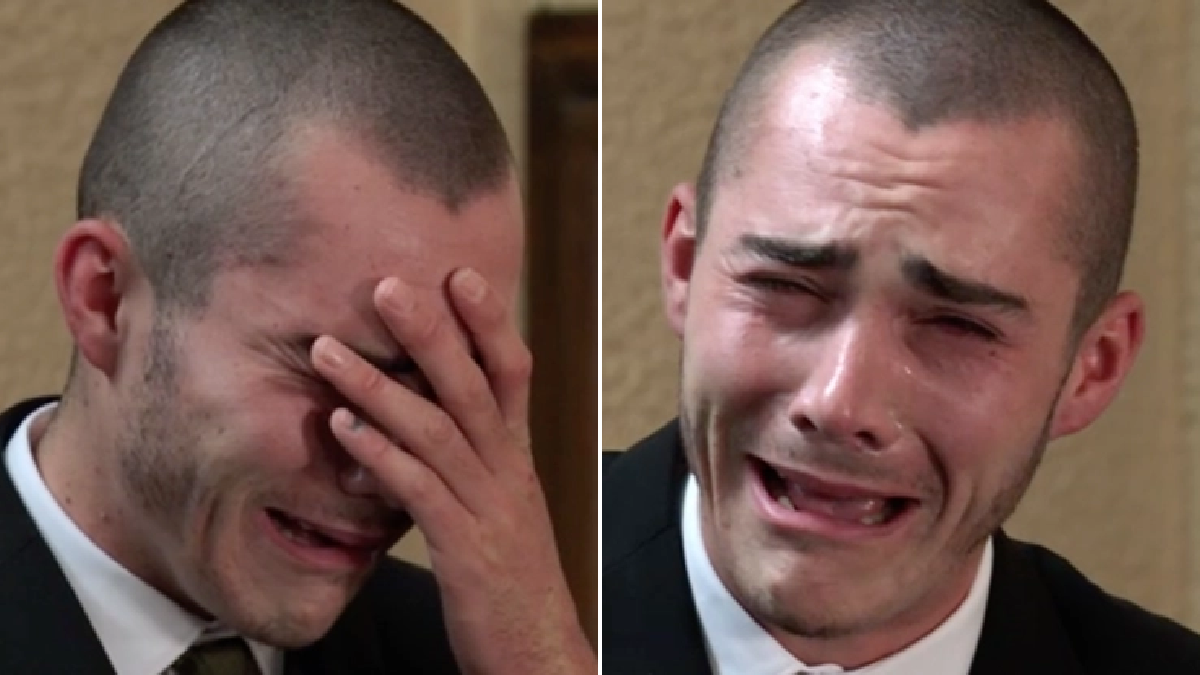 Corey Brent (Maximus Evans) feigned emotion while being cross-examined by Imran Habeeb (Charlie De Melo) in Coronation Street, and fans are not happy.

The teen is currently on trial for his role in the demise of Seb Franklin (Harry Visinoni), who died back in May in a brutal hate crime.

Seb and girlfriend Nina Lucas (Mollie Gallagher) were set upon by Corey and his mates Eli and Jay, while Kelly Neelan (Millie Gibson) watched from afar.

Flashbacks to the eve of the assault revealed that Corey was solely to blame for Seb’s death, as he brutally and heinously kicked him over and over again.

But the vile teen threw Kelly under the bus to protect himself, with mate Eli even testifying that it was Kelly who attacked Seb!

Tonight’s first of two episodes of the ITV soap saw Corey take to the stand, and Imran went to town on him, demanding that he admit that he is to blame for Seb’s murder.

‘You see her: Nina’, said Imran, describing what he believed to the be an accurate depiction of the night of the attack.

‘The object of all your hate feelings of inadequacy. And she was with her boyfriend. So you decided to punish them both, didn’t you?

‘You followed them. You attacked Seb ,and then you left him for dead, didn’t you?

‘But then you panicked – your words, not mine – and you got rid of all the clothes because they had blood on them – again, your words not mine. You asked your girlfriend to provide you with an alibi.

‘You did everything you could to hide the evidence of your guilt. But it’s written all over you face.

‘You killed him didn’t you? Go on, tell the court! You killed a young man in a fit of prejudice and jealousy!’

Corey retaliated by bursting into tears, claiming that it wasn’t him.

Fans of the ITV soap were not too pleased with this development. ‘Wipe away your crocodile tears stupid boy,’ said one disgruntled viewer.

Corey and Kelly’s trial will continue throughout next week, before wrapping up on Friday (September 10), when the jury reach a verdict.

But as Nina watches on, who will the jury convict? Will Corey at last pay for his crimes?