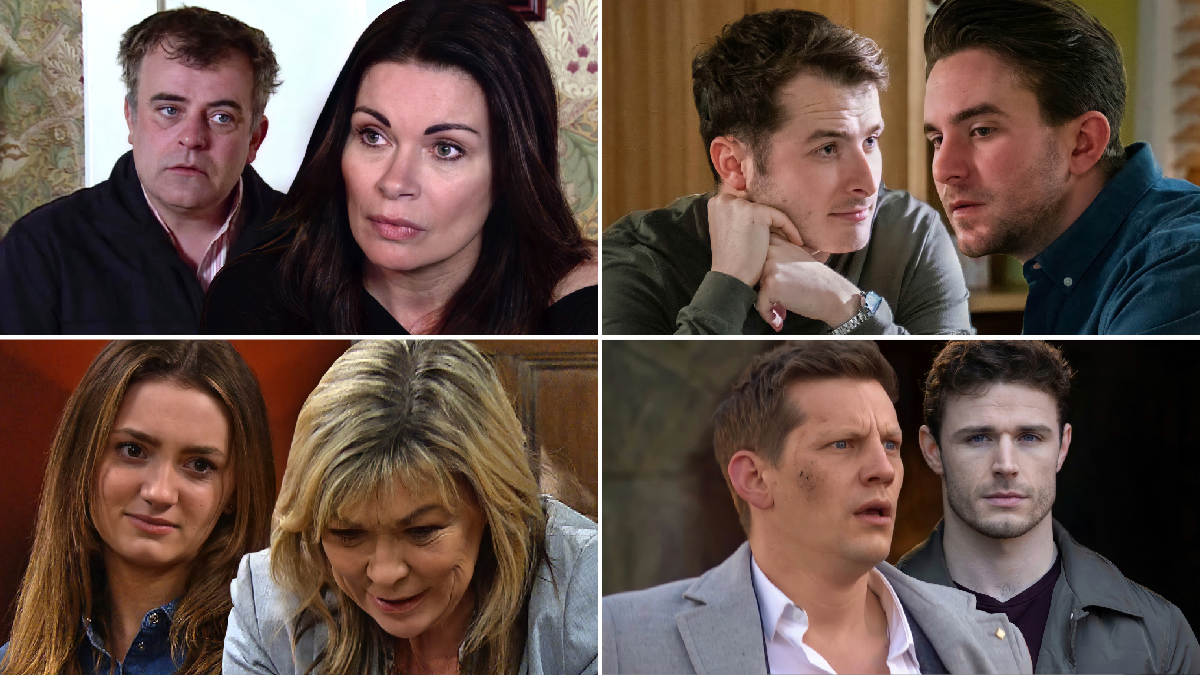 If you’d like to start the weekend with a look at what the soaps have to offer next week, then you’ve certainly come to the right place.

It’s a tense week for the residents of Coronation Street, but for Steve McDonald (Simon Gregson), it’ll likely be one he never forgets, after he walks in on Carla and Peter Barlow (Alison King and Chris Gascoyne) having sex!

Over in Walford, Ben Mitchell (Max Bowden) and Callum Highway (Tony Clay) encounter a problem regarding their impending nuptials! Will the EastEnders favourites make it down the aisle?

Emmerdale legend Kim Tate (Claire King) suffers another devastating collapse while in the care of Millie, and Gabby Thomas (Rosie Bentham) is left concerned when the matriarch refers to her unborn child as ‘My baby!’

It’s all kicking off, eh! If you fancy a little bit more information about next week’s soap shenanigans then sit back, relax and keep reading.

1. Sharon, desperate to track down missing Leanne, persuades Sally and Gail Rodwell to join her for a drink. When her plan fails, she manages to get her hands on Gail’s laptop! Sharon successfully locates Nick’s phone number! She soon returns the laptop, and meddles some more, as she gets involved in preparations for Sam’s party – and even offers to look after him after Sarah receives a message from Nick!

2. Carla shows up in sexy underwear, and she and Peter have sex in the living room – much to the dismay of Steve, who catches them in the act! Attention is diverted elsewhere, however, when Peter receives word from the transplant centre that he’s getting a new liver!

2. Nick and Leanne hide out in a flat, but when they get word that Peter is imminently having a liver transplant, Simon scarpers, and soon finds himself at the hospital – much to Peter and Carla’s dismay. Simon tells Peter he’s not returning to the hideout, but Peter manages to convince him otherwise, but later he overhears the cleaner on his phone, reporting his son’s whereabouts!

3. Seb arrives at the cafe – head to toe in goth attire – in a bid to surprise Nina for her birthday. Nina is taken aback by his gesture, but she’s left in shock when he hands her a funeral wreath – explaining that George assisted him in achieving his look. Horrified, Nina accuses him of making mockery of her yet again.

4. Chesney encourages Fiz to let Ty see the kids, and she ultimately does so. Tyrone spends the evening with the girls in Speed Daal, but Alina arrives, and Hope puts two and two together. To Ty’s delight, the girls are smitten with his new girlfriend. Fiz, however, is heartbroken when she discovers such a thing, and drags the girls away in floods of tears.

5. Dev’s attempt to stop Corey from taking asha back to his place ultimately backfires, as Asha and Corey ultimately move into Leanne’s old flat. Asha is overjoyed, and later enthuses about her new living arrangements – prompting Yasmeen to to warn Dev that he needs to keep a close eye on his daughter.

7. George isn’t pleased with Todd’s actions, and he ultimately sacks him! Todd returns to work his week’s notice, and George lays down the law, explaining that they have the body of a young boy in the chapel of rest, and therefore he’d better show some respect.

8. Linda and Nancy go on a surprise picnic with Shirley, but when Linda overhears her daughter on the phone to Tamwar, she comes to believe that he’s going to make an appearance! Nancy turns up late to the picnic, and when Linda discovers Nancy has a job at the gym, her interest is piqued. The landlady notices Nancy has left her coat… and she’s shocked by what she finds! She later confronts Nancy with her discovery.

9. Callum tells Ben and Phil that the wedding venue has gone bust, and therefore their whole wedding is cancelled! Ben, however, is determined to fix things, but will he be able to do so?

10. Billy meets with Janet’s agent, Estelle, who is rather taken with him, and invites him for a drink. Honey later comforts Janet, who says that the other kids treated her like a baby, and later she discovers a discrepancy with how much her daughter was paid. She threatens to cancel Janet’s shoot if Billy doesn’t assist her in resolving the pay issues with Estelle.

11. Rainie and Stuart weigh up the pros and cons of Bernie being their surrogate.

12. Kim tries to set up another date for Mila and Iqra, but Mila explains that she’s unavailable, as she has to work a double shift. Kim, however, realises that the young woman has lied about working, and thus she begins to investigate – and later finds her meeting up with a man!

13. Bailey is nervous for the approaching awards ceremony, and – still thinking about Mitch and Karen’s conversation from the previous night – she lies, claiming that the space camp will pay for the winners expenses, to the relief of Mitch. Bailey then overhears Mitch telling Karen he can’t afford the train fare, and thus she tells her dad that she wants to go to the awards ceremony without him.

14. Tiffany and Keegan are nervous about their meeting with the bank manager.

15. Kim’s left in shock when Andrea asks her to babysit poorly Millie at short notice, but she agrees to do so. However, she soon realises she’s not in a fit state to look after her granddaughter, and ultimately collapses – leaving Andrea a garbled voicemail, as she loses consciousness. Millie suffers an allergic reaction while Kim is out-cold, and Jamie is left in shock when he finds out what happened. Andrea, meanwhile, forbids Kim from looking after Millie ever again.

16. Charity informs Mackenzie that she is in charge, and from now on it’ll be her who makes all the decisions. Aaron, meanwhile, is desperate to know what they’re up to! Jimmy seethes when he discovers that Nicola has been attempting to sign half the business over to Charity. Nicola pleads with her husband, but he makes a shocking declaration!

17. Jamie attends the baby scan with Gabby, and he becomes emotional. Gabby, of course, is thrilled at such a thing, but she’s left unsettled when she shows Kim the baby scan – as Kim refers to the unborn child as ‘my baby’.

18. Marlon breaks the news to Billy and Ellis that he’s having to double their rent! Billy and Ellis, however, are soon looking for somewhere else to live.

19. Nate plans a stay with his mum, and he feels as if he can’t seem to do anything right. Faith intervenes, however, and soon enough Nate is telling Tracy that he’s arranged something for her to look forward to.

20. Faith comes up with a plan regarding her hearse. Eric later finds her stealing bedding and a mattress! Just what is she up to?

21. The McQueen family are thrown into chaos following a shock event which took place during the previous day.

22. It appears as if Sid might have a crush on his teacher, Courtney. Leah catches him writing a song about a mystery brunette girl.

23. Diane’s internal monologue reveals that she fears the electricity in her house isn’t safe, and she’s concerned that her family are in danger. Tony brushes off her worries, but later, her OCD escalates. She’s fearful that a lamp could catch fire after a lightbulb blows. Tony, meanwhile, discovers that she’s cancelled her scan.

24. Mercedes confides in Goldie that she is feeling pregnancy signs, and therefore she decides to get a test. Goldie, meanwhile, tells Romeo the secret, leaving him floored!

25. George’s ex Dean returns to the village, and Nancy is on a mission to find out why.