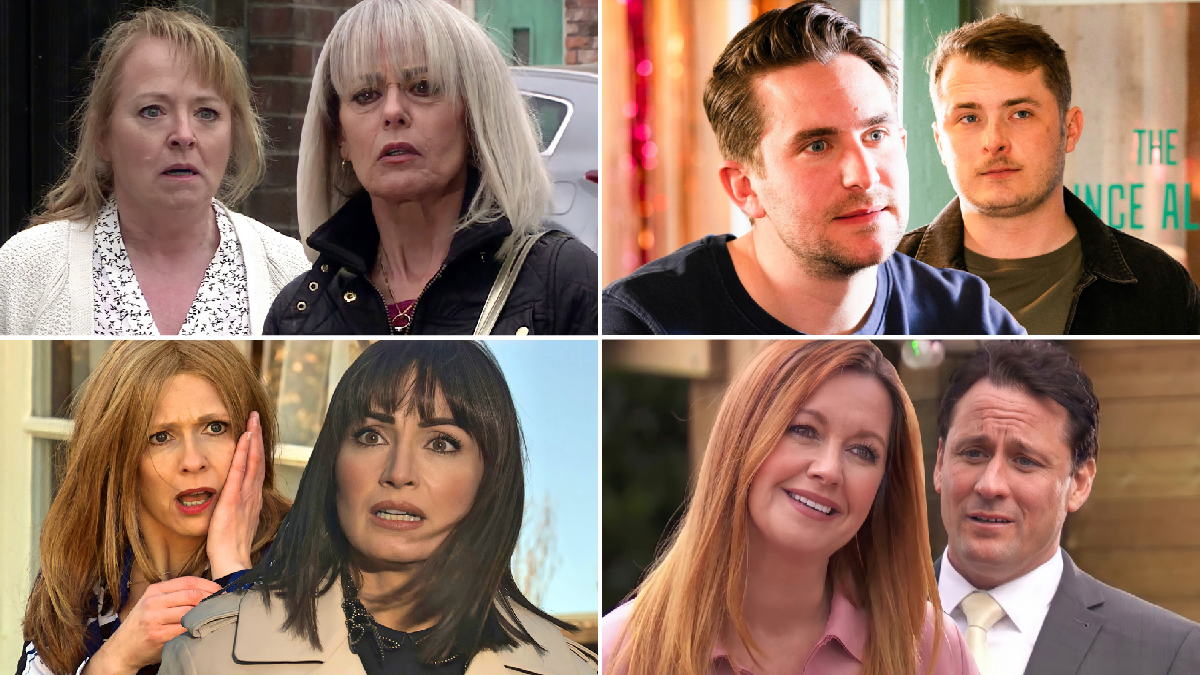 If you like your soaps with an extra helping of drama, then you’re in for a treat next week!

Oh, and a gunshot sounds – but who has been shot?

Linda Carter (Kellie Bright), meanwhile, collapses while at the gym, leaving her fearing for her unborn child! Will the EastEnders legend be okay?

Leyla Harding (Roxy Shahidi) jumps to the wrong conclusion in Emmerdale, and ends up smacking Bernice Blackstock (Samantha Giles) across the face as a result!

And Diane Hutchinson (Alex Fletcher) reckons that she wants to recreate lockdown with Tony (Nick Pickard) over in Hollyoaks – but what will Tony have to say about such a thing?

Only one way to find out!

1. Jenny is shocked when she works out that Sharon rented the van used in Sam’s kidnapping. She discusses her suspicions with Ronnie, who reveals he heard Sharon quizzing Toyah about Leanne – and suddenly it all falls into place! The landlady tells Toyah and Imran what she knows, and is left stunned when she learns why Leanne is in hiding! Jenny is desperate to tell Rita the truth. Sharon, however, appears before she can do so – and Jenny is in grave danger!

2. Rita returns home and finds Sharon about to do a runner! She demands an explanation, and Sharon opens up about how she had no choice but to join her drug dealing brother, claiming life subsequently went down hill. Gary, meanwhile, spots the van Sam was kidnapped in, and races to Rita’s – telling her to call the police. The driver, however, pulls out a gun, and suddenly a gun shot sounds! The repercussions of Sharon’s unmasking sends shockwaves through the cobbles.

3. Abi instructs Nina to attend the wake in her goth dress, as it’s what Seb would’ve wanted. As the hearse pulls up on the street, Corey appears – much to the dismay of Nina and Abi. He claims he wants to pay his respects, but Abi overhears him laughing about her son’s death while on the phone to his mates. She pursues him with a broken bottle in her hand, but Asha stops her – pointing out that Seb wouldn’t want her behind bars.

4. Asha convinces Corey that she thinks he’s innocent, but – having got drugs from Abi – she slips them into his drink. She uses his phone to find evidence – will he catch her? Abi, meanwhile, reveals Asha’s shocking plan to Nina, and they head around to the flat. Corey tries to get past them, but he loses his balance and falls down the stairs! They look at his lifeless body, and ponder if they should call an ambulance, or leave him to die.

5. Sarah begs Adam to reconsider his offer to donate his liver to Peter. Adam hears what she’s saying, and later tells Carla that he’s pulling out – leaving Carla upset. Carla, however, becomes rather angry when she discovers that Sarah encouraged his decision, and accuses her of only doing so as revenge for him having slept with her.

6. Gary tells Maria that he’s thinking of taking a job in Bristol to be near Zack, but he secretly hopes she’ll tell him to stay. He later admits that he doesn’t want to leave the street, but how will Maria react?

7. Carla tries to chase Lucas for payment, but she discovers his phone number is no longer in service. After doing some digging, she tells Sarah that she was right to have her doubts about Lucas, as it appears as though he’s gone bust! The duo set off to Lucas’ premises to reclaim their stock.

8. Nancy’s attitude is causing problems among the Carter clan – particularly for Linda. Frankie encourages her to reach out to her mum, and thus she offers her a one-on-one personal training session. Linda, desperate to conceal her pregnancy, pushes herself too hard and collapses. Sharon and Nancy are on hand to look after Linda while the ambulance arrives, and Linda tells Sharon she’s pregnant – but she cannot feel the baby moving.

9. Ben and Callum return from their honeymoon, but they’re shocked to discover that Vi is still at Stuart’s, meaning that they’ll have to make do with the blow up bed! Ben thanks Phil for the honeymoon, but Phil makes it clear that it’s the last thing they’ll be getting from him, and his blood boils when he sees Callum in the cafe.

10. Mo is invited on a cruise with Fat Elvis, but she turns him down, revealing to Jean that she’s worried about her. Jean, however, manages to convince her to go on the cruise. She and Kat throw her a going-away party. Mo acts shifty around the garage. Jean, meanwhile, struggles to say goodbye, muttering that she may not be around when she returns – something which Zack overhears. Zack asks Jean what she meant, but Jean has other things on her mind, as she asks him for assistance.

12. Ben meets up with Callum, but he finds him in the company of colleague Fitzy. He senses he’s not welcome, and therefore decides to leave them to it.

13. With Jags in danger, Suki suggests asking Ben for help. In order to keep him onside, Kheerat asks Sharon to keep their relationship a secret. Ben, meanwhile, tells Kheerat he can consider Jags safe, but when he opens up about his problems with Callum – particularly someone sneaking around behind his back – Kheerat is riddled with guilt.

14. Kat gets mugged on the way home. She bumps into Suki and Callum who ask if she’s okay, but when Suki makes a laced comment about Phil finding a way to deal with the mugger, Kat jumps to his defence.

15. Kim invites all those she believes capable of poisoning her up to Home Farm for a formal luncheon. She keeps up the pretence that she’s being drugged, as all the guests arrive. The legend declares that she’s stepping back from the business, and sets about anointing her successor – revelling in the conflict it creates among her guests. Finally, she makes a speech – one especially designed to manipulate her poisoner into taking action.

16. Mack steals Val’s coat from Pollard’s barn – much to the dismay of Ryan, who desperately tries to convince him to return it. Having come up with an idea, Mack pops around to visit Pollard, and offers I’m a quid pro quo: he’ll return the jacket in exchange for Aaron’s freedom. Pollard can’t quite believe the young man’s audacity, but he soon suffers an angina attack and ends up in hospital.

17. Bernice’s return doesn’t go down too well with Leyla, who fears she’ll overshadow her happiness. Bernice tries to return Liam his engagement ring, but Leyla gets the wrong end of the stick and assumes she’s proposing – and slaps her!

18. Victoria is planning on asking Luke to move in, but Ethan makes a starting discovery about what Luke is up to, and soon he reveals all to Wendy. Wendy pleads with Luke to open up, but he’s not sure he can. He does, however, come clean, and Wendy urges him to tell Victoria what he’s just told her – but he refuses.

19. Jimmy and Nicola are excited about having Carl back in their lives. However, it’ll take more than this to heal the huge rift between them.

20. Leanna drops hints to Billy about the lack of attention she’s been receiving from Jacob.

21. Courtney has a meeting with Nancy, and the school launches an official investigation into her relationship with Sid. Sid, therefore, is forced to reveal the truth. Will Nancy believe him?

22. Sienna finds a note written in Summer’s handwriting which reads: ‘Destroy Brody’! Summer is taken aback when Sienna confronts her on the matter, and she concocts a lie – desperate to keep her true motives hidden.

23. Ollie makes a surprise return. He’s had to discharge himself from rehab early, and he’s got a pretty big reason for doing so! Cindy meets with him alone, and she discovers the reason why he had to leave rehab. Afterwards, she makes a huge decision, but she’s later confronted about the action she’s taken, and Sue uses this as an opportunity to push her out of Luke’s life!

24. Diane covers every item of furniture in her home with protective sheets, leaving Verity worried. Verity relays her concerns to Tony, but when he confronts Diane, she denies her sister-in-law’s claims. Diane later asks her hubby if they can create their own lockdown: one in which neither of them would leave the house!

25. Fergus receives a visit from tech guy Timmy, who reveals that there is a problem with operation bluebird: they’re losing subscribers because a camera has gone down, and he’s got 24 hours to get said camera live, or their biggest subscriber is cancelling!