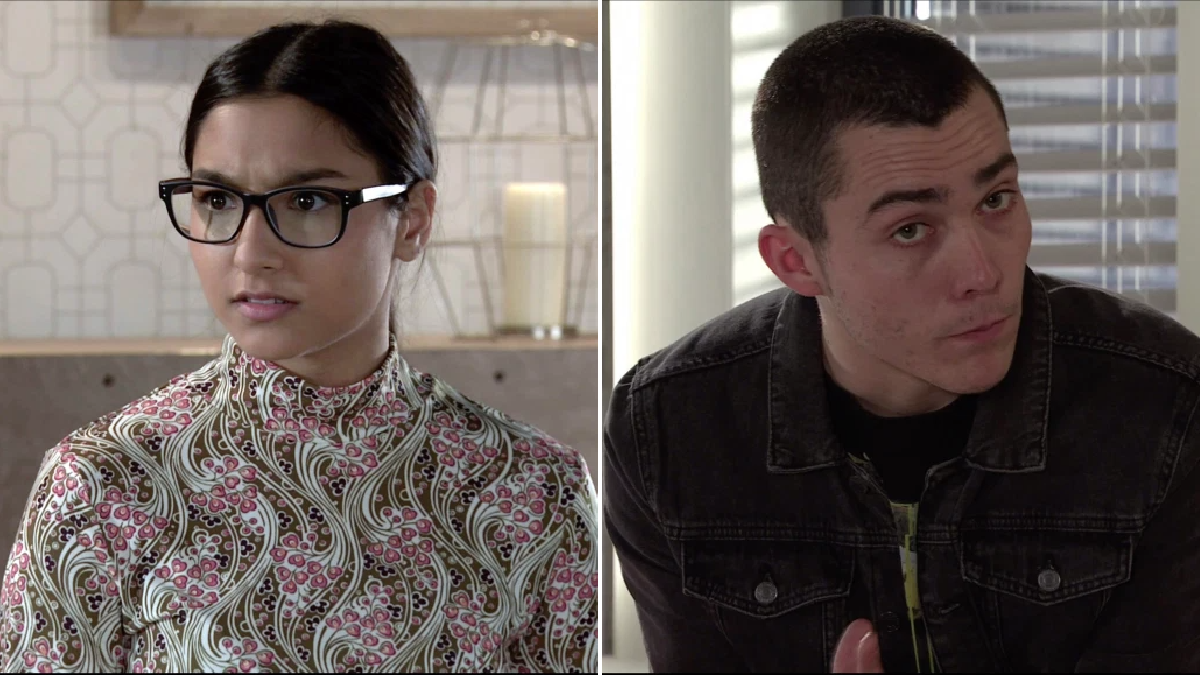 Asha Alahan (Tanisha Gorey) in Coronation Street has fallen back in the arms of controlling Corey Brent (Maximus Evans) after splitting up with Nina Lucas (Mollie Gallagher).

The teen has been involved in a lot of emotional and difficult storylines in the last few years; she attempted to lighten her skin, she had a naked video of her sent around to her fellow school friends, and overall, Asha has really struggled to find the person she wants to be.

As her friends and family make clear that her relationship with Corey is going to end in tears, Asha isn’t listening, but as Tanisha Gorey recently revealed, it’s highly likely Asha is aware of Corey’s controlling behaviour, but her desperation to be loved is stopping her from admitting the truth:

‘I think her insecurity and desperation for love affect her decisions. Because of all that has happened to her, she is trying so hard to make it work with Corey and I don’t think it even really matters to her who she is in a relationship with now.

Asha is definitely trying to convince herself as well as trying to convince him. Asha is trying so hard to make this work and this so-called relationship to be perfect. She is a smart girl and she knows this is wrong but she doesn’t want to admit that to herself just yet.’

Dev (Jimmi Harkishin) hasn’t hesitated in telling Corey what he thinks of him in recent episodes, but as Asha tries to convince her father that she wants Corey to be a part of her life, it makes for a very different dynamic between father and daughter as Tanisha explained:

‘When Dev first finds Corey in the house again he is outraged so the family dynamic is very tense from then on. Corey is trying to worm his way back into Asha’s affections by telling her that he has changed and because she’s only opened up to Dev about Nina a little bit, Corey is really the only person that she feels is there for her right now.’

Asha was heartbroken when Nina ended their relationship. Finally, Asha had found someone who was kind and caring but as Nina felt they were moving too quickly, she decided they should just remain friends, which has led a devastated Asha back to Corey.

With things set to escalate between Asha and Corey, Tanisha added the harsh reality Asha is facing as she stays with Corey because she thinks no-one else wants to be with her:

‘Asha thought Nina was great and that their relationship was fine so when they split up she was blindsided and now she feels like Corey is the only one giving her attention. Asha still has feelings for Nina because she was so infatuated with her and loved her perspective on life and how she looked at things.’

‘She is so desperate to be loved but because Corey is always there it makes him the perfect candidate.’