‘Didn’t have to come on!’ Richard Madeley hits out at GMB guest moaning about royal debate

GMB: Richard Madeley slams Gove for not self isolating

Good Morning Britain was discussing the Oxford students who have voted to take down a portrait of the Queen from their common room because she “represents recent colonial history” and would make people feel unwelcome. Richard Madeley and Susanna Reid were joined on a live video link by Professor Kehinde Andrews and a Oxford student Calvin Robinson, and the conversation turned to whether the students intent was to just create a windup. The Professor argued it was the news outlets – like GMB – which were “making a deal out of it” and the presenter told him he “didn’t have to be on the programme”.

“This is a wind-up, isn’t it?” Richard remarked. “Historically, what they’re saying makes no sense.”

“This is hilarious,” Professor Kehinde said. “It’s only news because right-wing news programmes made a deal of it.”

“You didn’t have to come on the programme,” the presenter commented. “Don’t blame us.

“I don’t think you’re getting a sense of rage from this programme, more amusement.”

“Calvin, you’re in Oxford, is this a wind-up?” Richard asked and the student said those who removed the photo were “virtue signalling”. 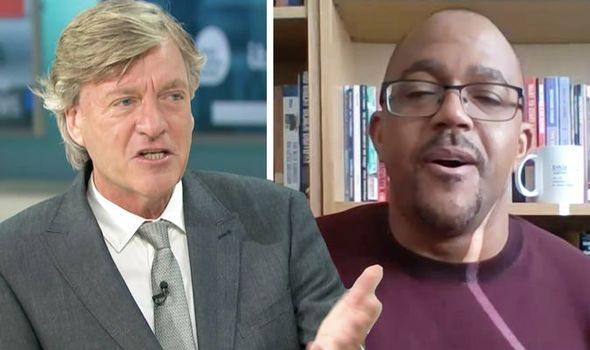