Does 'Cruella' Redeem Disney's Greatest Villain? And Should It?

“But does it try to make her… sympathetic?” was the first question asked by colleagues and friends alike, not to mention any random stranger I encountered in a post-vax fantasia, upon telling them that I’d seen Cruella. It’s a fair question. And the answer is, sort of? But perhaps we’re thinking of this all far too linearly.

The concerns that Cruella would be given some softened or sanitized reason she is the way she is arose from the first trailer, which left many supposing the live-action origin story is Disney’s Joker-ification of Cruella, the discoursed-to-hell-and-back movie that took the Clown Prince of Crime and turned him into a white man that doesn’t understand standup comedy isn’t for everyone. Because we know who Cruella is, it’s all there in the song: This vampire bat. This inhuman beast. She ought to be locked up and never released. The world was such a wholesome place until Cruella, Cruella de Vil.

That was impetus enough for 1961’s One Hundred and One Dalmatians and 1995’s 101 Dalmatians. In the former, inspired by author Dodie Smith’s 1956 novel, the extent of Cruella’s character is as a fashionista heiress whose fixation with fur drives her to murderous insanity as she plots to steal and skin Dalmatians to create a spotted fur coat. As played by a go-for-broke Glenn Close in the latter, Cruella became head of the House of DeVil, though she remained just as obsessed with killing puppies in the triple digits and wearing their hides. Neither offered up an explanation beyond Cruella is crazy for fashion, if just a bit crazy.

And that was explanation enough. We don’t know exactly how she became a morally bankrupt canine killer but watching her scheme and vamp and be Cruella was the highlight of those films. But in our current age of I.P. synergy, studios have an answer for everything — especially if that answer can launch a new franchise. Maleficent isn’t the Mistress of All Evil but a misunderstood fairy with a tragic past played by Angelina Jolie. Now, Emma Stone’s Cruella is more than PETA’s worst nightmare — she’s a misunderstood fashion designer with a tragic past of her own. 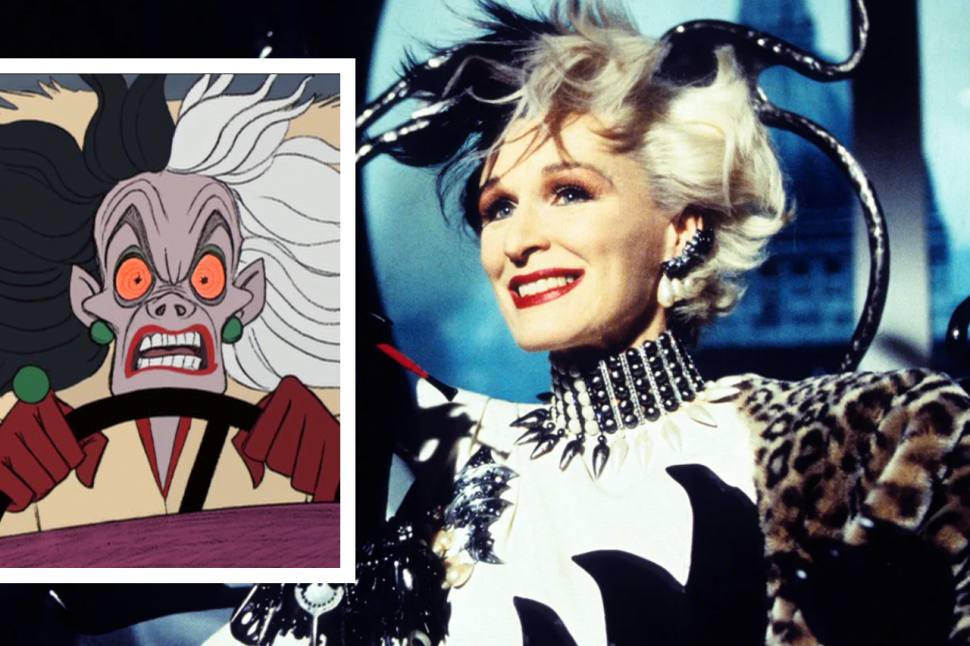 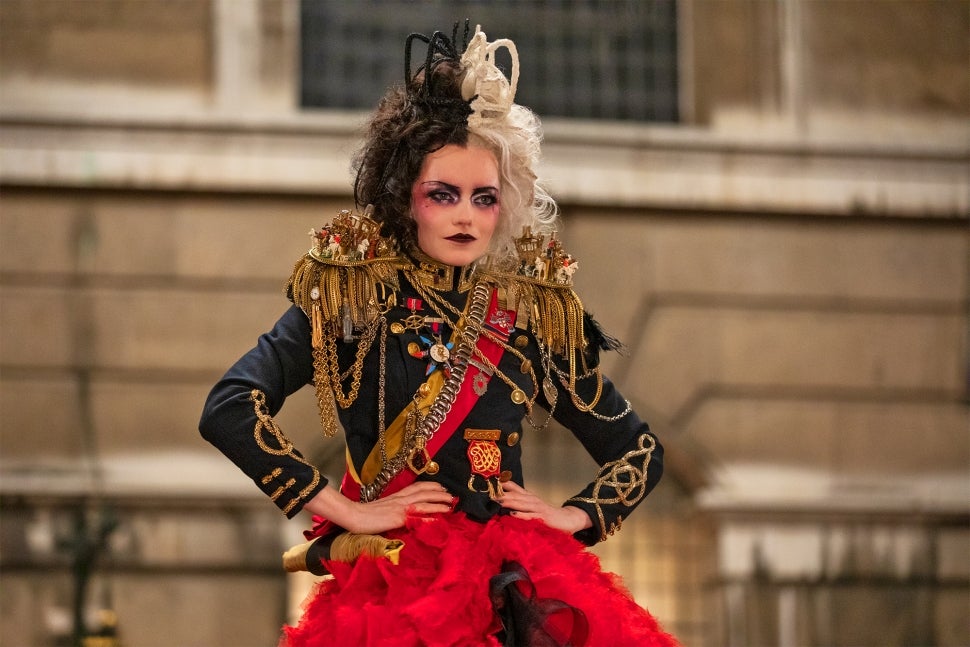 Billed as a “backwards redemption story, a kind of de-redemption story” by star Emma Thompson, Cruella first introduces Estrella — her government name — as a rebellious, temperamental child living in the pre-punk ’60s. Her mother coins the name “Cruella” for when Estrella acts out, making it something between an alter-ego and a split personality. Young Estrella is an outsider, made immediately evident by her unnatural black-and-white hair, and is bullied at school. She’s also, it should be noted, a dog lover and takes in a stray she names Buddy.

When Estrella faces expulsion from school, her mother decides to shuffle her away to London. En route, they must first make a stop at the ominous mansion of a fashion magnate, Baroness (Thompson), where her mother has secret business to conduct. Estrella, meanwhile, happens upon a fashion show and feels, for the first time, a sense of belonging — promptly also causing mayhem, at which point the Baroness’ three vicious Dalmatians chase her only to inadvertently attack her mother, pushing her over the edge of a cliff to her death. The moment is just as batsh*t insane to watch as it is to read.

So, orphaned Estrella makes her way to London, where she links up with street urchins Horace and Jasper and becomes a petty pickpocket. “Sad story,” Stone deadpans in voiceover. “Genius girl turns into stupid girl who gets her mother killed. And ends up alone.” By the very definition of empathy, any sort of origin story will make you more feel more for the character, because empathy comes about through understanding. So, she wants to kill a hundred or so Dalmatians because Dalmatians killed her mother. Simple enough, right? Not so fast.

MAJOR SPOILERS AHEAD: Smalltime grifts lead to a Devil Wears Prada subplot in which Estrella gets a job at the House of Baroness, which leads to an attempted jewelry heist before Cruella reenters the picture: First, Estrella learns that the Baroness uses a whistle to sick her dogs on someone, and so it was she who killed Estrella’s mother. And so, Cruella gives its lead the same motivation Disney heroes have had for eons: The death of a parent. In this, though, its antihero wants revenge.

Shedding Estrella — the well-behaved, thoughtful young girl her mother wished her to be — and assuming the identity of the anarchic Cruella, she sets out to ruin the Baroness, first kidnapping her Dalmatians, then ruining her spring collection, all the while stealing attention with Cruella’s own rising profile in the fashion scene. This is the Hannah Montana-fication of Cruella.

And then a second twist: Estrella is actually the Baroness’ daughter, sent away to be killed at birth but saved instead, a revelation which leads Cruella to deliver this wild line of dialogue: “My nemesis is my real mother. And she killed my other mother.” That’s ultimately the main explanation for how Cruella became Cruella: It’s hereditary. “I’m not sweet Estella, try as I might. I never was. I’m Cruella. Bold. Brilliant. Born bad and a little bit mad.” And still, she’s neither that bad nor that mad, with the movie smoothing out her most maniacal edges and lending righteousness to her cause.

The crazy thing is, in all of this some things just are the way they are: Cruella’s bifurcated hair isn’t a choice, nor is it explained. That’s how she was born.

Which is a long way to answering the initial question: Yes, Cruella makes Cruella a sympathetic character. But by the end of the film, it’s impossible to imagine how this Cruella becomes either Cruella we’ve seen before. The closest she gets to skinning puppies here is musing that the Dalmatians would make a fabulous coat before then clarifying she’s joking, instead designing a spotted faux fur coat that the Baroness mistakes for one made from her dogs. Making Cruella someone who doesn’t want to murder one hundred or so puppies and wear their dead bodies is a guaranteed to make her more approachable. But is she really still Cruella, then?

Ultimately, this isn’t a prequel, in the traditional sense, or even an origin story for the Cruella we know and love. Cruella de Vil becomes Cruella de Pressed (and sometimes Manic). Stone attempted to untangle this in her interview with ET. “Part of the reason why this was so exciting to do and a process that was a long time in the making, of building this sort of origin story,” she said, before correcting herself: “Or even not really origin story, but sort of moving her into the ’70s and building this world around this character that we think we know but we haven’t ever seen what made her into this kind of a, well, madwoman. She’s a madwoman.”

This Cruella is even on good terms with the Dalmatians who executed her mother by the time the credits roll — adopting them following the Baroness’ demise — so there doesn’t appear to be a lingering resentment towards that specific breed. In fact, one of the Dalmatians is pregnant, it turns out, and in the post-credits scene, Cruella gifts Anita Darling (Kirby Howell-Baptiste) and Roger (Kayvan Novak) with two of the puppies, which she names, of course, Perdita and Pongo.

That Roger then performs a rendition of, “Cruella de Vil, Cruella de Vil, if she doesn’t scare you, no evil thing will,” despite having just been given the very generous present of a pure bred puppy is a head scratcher. (He also worked for the Baroness, a convicted murderer, but remains focused on Cruella’s non-villainy.) That’s just Disney fan service for the old Cruella mixed with this new Cruella, who is not that Cruella and likely never will be.