WASHINGTON — It was not quite noon on a sunny Saturday in Washington, and Dr. Anthony S. Fauci, the renowned infectious disease specialist and top medical adviser to President Biden, was worried about what shirt to wear.

He had just wrapped up a White House call, his third Zoom of the day. He popped out onto his back deck in jeans and a red T-shirt under a long sleeved blue crew neck, wondering aloud if he should change. The last time he had been photographed at home, in sunglasses beside his backyard pool, he said, he faced “a firestorm of the crazy far right” accusing him of “trying to be a movie star.”

Now Dr. Fauci — arguably the nation’s most famous, and suddenly most polarizing doctor — is a movie star, in a manner of speaking. A new documentary titled, simply, “Fauci,” had a limited run this month in 11 cities (in theaters that required proof of vaccinations and masks) and will begin streaming in early October on Disney+.

“Fauci,” the movie is, for the most part, a lot like Fauci the man: straightforward and no nonsense. But the film, which tracks Dr. Fauci through the two infectious disease crises — AIDS and the coronavirus pandemic — that have served as book ends to his long career, also reveals his tender and playful sides, featuring old family footage of him shirtless and poolside with his children, or doing a goofy Dad dance.

Dr. Fauci, 80, joined the National Institute of Allergy and Infectious Diseases, a branch of the National Institutes of Health, in 1968, and has been its director since 1984. For those who have long followed his career, the film’s story line is familiar. But its searing images from his early days — skeletal men in hospital beds; corpses with toe tags attached; angry protests by AIDS activists who fought and later befriended him — may surprise a younger generation.

In one of the film’s most arresting moments, Dr. Fauci recalls arriving at the bedside of an AIDS patient who suddenly no longer recognized him; the man had lost his vision. As Dr. Fauci tells the story, his voice cracks, his lower lip begins to quiver and his eyes blink. John Hoffman, one of the film’s two directors (the other is Janet Tobias), asks why it is affecting him now, all these years later.

Dr. Fauci pauses to gather himself. “Uhhhhh,” he finally says. “Post-traumatic stress syndrome.” Another long pause. “That’s what it is.” 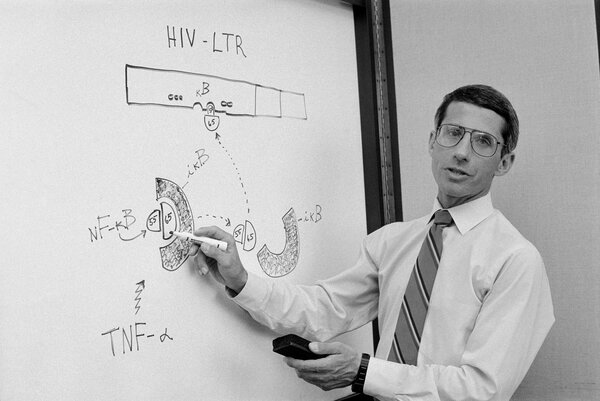 At home, sitting on his back deck beside the hibiscus plant that he waters every day (“Tony’s pride and joy,” said his wife, Dr. Christine Grady), Dr. Fauci appeared relaxed — or as relaxed as he can be given the magnitude of the health crisis he is confronting.

He did not mince words about the “extreme far right QAnon jerks” who have threatened him and his family. He recalled pointedly instructing the film crew not to interfere with his work: “This is not going to be, take one, take two, take three on a movie set.” He deemed the final product “an honest, down-to-earth documentary.”

Dr. Fauci had no editorial control over the film — a point its promoters take pains to note. Carolyn Bernstein, the executive who oversaw the project for National Geographic, said the filmmakers “didn’t want this to be a hagiography,” and “wanted to make sure that we were telling the warts and all story.”

But there are few warts on display in “Fauci.” The movie is overwhelmingly admiring, with cameos by Fauci fans including former President George W. Bush and Bono; they worked closely with Dr. Fauci on Mr. Bush’s government program to combat the global AIDS epidemic.

The lone critical voice among those interviewed comes from Apoorva Mandavilli, a science reporter for The New York Times who writes about the coronavirus and who suggests Dr. Fauci’s conservative critics may have a point when they accuse him of flip-flopping by initially advising the public not to wear masks, and later reversing himself. (Dr. Fauci says he did so because masks were in short supply at the time, and evidence that they curbed the spread of the disease did not come until later.)

Ms. Tobias was already at work on the “Fauci” documentary when the novel coronavirus emerged in China at the end of 2019; she had gotten to know him through her work on a 2017 film about pandemics and was interested, she said, “in this idea of him as a long-serving public servant in an era when public servants aren’t particularly valued.”

When the pandemic hit, Dr. Fauci’s likeness was suddenly everywhere — on socks, coffee mugs, prayer candles, cupcakes. His fans tried to nominate him to be People magazine’s 2020 “Sexiest Man Alive.” Only later would the downside of stardom emerge.

Mr. Hoffman, the other director, who had also worked on health-related films, saw a hot story and reached out to Ms. Tobias. Mr. Hoffman sifted through archival footage and conducted interviews — 20 hours with Dr. Fauci alone — while Ms. Tobias moved to Washington, D.C., from New York so she could join Dr. Fauci’s Covid bubble and film safely during lockdown.

“His head of security and I were doing nose swabbing five days a week,” she recalled.

The documentary toggles back and forth between voices of his detractors, then and now: AIDS activists toting mock-ups of Dr. Fauci’s bloody head on a stick, chanting, “Liar, Fauci!” and calling him a murderer. Conservative commentators proclaiming he should be “fired, indicted and thrown in jail.”

While there are parallels between the two eras, Dr. Fauci sees a significant difference. The AIDS activists who attacked him were fighting for their own lives. “I cared about them, and they were fighting for a good cause,” he said in the interview at his home. “They weren’t fighting for a conspiracy theory.”

The film features a clip of a television interviewer remarking that AIDS affects “only a small unsavory group of people.” Dr. Fauci strongly objects. “These individuals who are infected, be they homosexuals or I.V. drug abusers are people,” he says. “People who deserve compassion, who deserve care and who deserve concern.”

It is Dr. Fauci “as a humanist,” Mr. Hoffman says, that he hopes viewers will remember.

The film does not dwell too heavily on Dr. Fauci’s frequent clashes with former President Donald J. Trump, who called Dr. Fauci “a disaster” and openly toyed with firing him. (He had no authority to do so, because Dr. Fauci is not a political appointee.) But the movie does offer a peek into the tensions, when his assistant tells him the White House has rejected television interview requests because it wants the focus on the economy.

“I don’t get how talking about vaccine isn’t important about the economy,” a frustrated Dr. Fauci exclaims. “If you get a vaccine, the economy will open. So what’s the problem?”

Few people navigate Washington’s nexus of media, science, policy and politics as artfully as Dr. Fauci. Having advised seven presidents, he is equally at home on the set of “Meet the Press” or the star-studded White House Correspondent’s Dinner, as he is in the lab. Mr. Bush notes in the movie that Dr. Fauci is “not a politician.”

But Peter Staley, an AIDS activist who also appears in the film, says Mr. Bush does not have it quite right. “He’s not partisan — that’s a red line for him,” Mr. Staley said in an interview. “But he’s a master politician.”

Sitting on his back deck, Dr. Fauci grudgingly agreed. In Washington, he said, “you’ve got to know what battles to fight, what battles not to fight.” He described himself as a “modest, humble person” — an assertion that, he acknowledged, his critics will never believe, given his many television appearances and cooperation with the filmmakers.

He does interviews, he said, to get his public health message out, and cooperated because he thought it would inspire people to go into public service. Given all that has transpired since he agreed to participate — federal authorities recently arrested a man who repeatedly threatened to kill his entire family — he said he is “a bit uncomfortable about a documentary that features me.”

Dr. Grady, a bioethicist at the N.I.H., is uncomfortable as well; the threats have only grown, she said, since Joe Biden became president. She does not think the film will change any minds. “I think there are fans, and there are haters,” she said. “I don’t think there’s anybody in the middle.”

Dr. Fauci will turn 81 on Christmas Eve. Dr. Grady says he has not had a single day off in 18 months and is “exhausted.” He is taking notes for a memoir, but said he cannot pursue a publishing contract while he is a federal official. With the highly infectious Delta variant spreading across the country, he has given no thought to retiring.

“I’m not completely crazy to think that I’m going to be doing this when I’m 92,” he said. But right now, he said, he is focused on “ending this pandemic, you know, putting it in the rearview mirror, and then maybe taking a deep breath and thinking about retiring.”

And with that, he had to go. Another Saturday afternoon Zoom call was about to begin.