Home viewing competition this week was stiff. It included the HBO Max same-day premiere of “The Suicide Squad” and ongoing availability of Disney’s “Black Widow” and “Jungle Cruise” for an extra $29.99 for Disney+ subscribers. The two titles that could break through were “Pig” (Neon/$6.99) and “Roadrunner: A Film About Anthony Bourdain” (Focus/$19.99), both of which added VOD play after three weeks in theaters.

Many Nicolas Cage movies are genre-exercise VOD exclusives, but “Pig” stands out with excellent reviews (82 Metacritic) and his performance as a truffle hunter in search of his beloved pig received some the best reviews of his career. It placed on all three charts and as high as #2 on iTunes. (Vudu and FandangoNow, both on-demand movie sites under the same ownership, combined under the Vudu brand this week.) 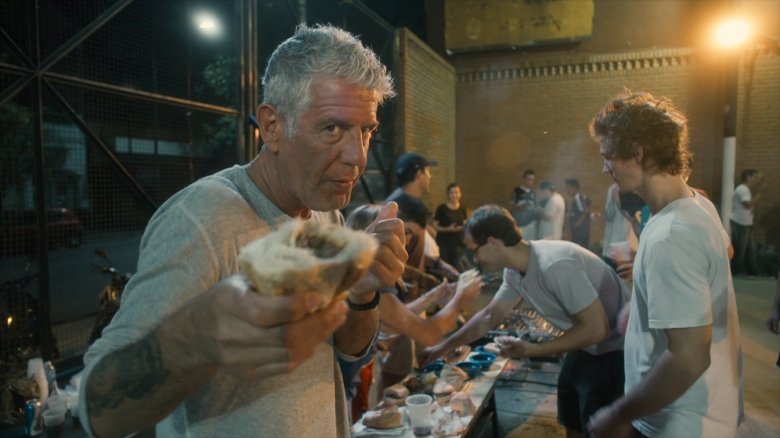 “Roadrunner: A Film About Anthony Bourdain”

“Roadrunner,” released Friday, is #7 on iTunes. Vudu reports that though the title is just below its top 10, it was their third-highest ranked new release.

“Luca,” which began as a no-surcharge Disney+ exclusive, added PVOD ($19.99) and placed #6 at Vudu. It ranked just below the top 10 at iTunes and Google Play.

The Netflix chart returns to wider diversity after multiple weeks of “Twilight” and “Fear Street” franchise films. “Vivo,” their Sony Animation animation acquisition, hit #1 immediately at release. The Cuba-set film includes songs from Lin-Manuel Miranda. Originally scheduled for late 2020 theatrical release, it is another example of the damage done for exhibition by Covid. At that threat reemerges with the Delta variant, Sony’s decision to sell it off for home play looks like the right choice.

Just behind “Vivo” are two more debuts. “Aftermath,” a horror entry about a couple encountering unforeseen problems after they purchase a home, is #2. “The Vault,” previously a strong VOD release, enters at #3. “The Swarm,” a French film about a farmer who finds that the edible grasshoppers she cultivated are out of control, is #6.

Two 1995 titles of minor note — Damon Wayans comedy “Major Payne” and early cyberthriller “The Net” starring Sandra Bullock (actual line: “Where can I hook up my modem?”) — are currently #5 and #9 at Netflix.

iTunes and Google Play rank films daily by number of transactions, irrespective of revenue accrued. These are the listings for Monday, August 9.

Most viewed, current ranking as of Monday, August 9; originals include both Netflix-produced and Netflix-acquired titles they initially presented in the U.S.