‘Floodlines’: The Podcast with the Lessons from Katrina We Can Heed Right Now

Trying to encapsulate what Hurricane Katrina meant to the people of New Orleans and the nation at large is a daunting task. To do it over the course of eight episodes — as the new podcast “Floodlines” does — is a feat of empathetic and diligent storytelling.

It’s also one born out of embracing the unexpected themes and lessons that come from speaking to individuals who each saw the storm and its aftermath from a slightly different angle. Lingering under the surface of the series is an idea that host Vann R. Newkirk II hadn’t anticipated being part of the show’s DNA. “I think we began to reach toward a meditation that just wasn’t on my radar we started: Why do we have a need for heroes and villains in these types of situations in the first place? What does it say about us?” Newkirk told IndieWire.

Newkirk, part of a core trio that also included executive producer Katherine Wells and producer Alvin Melathe, spent a year of writing and reporting what became the eight episodes of “Floodlines,” released via The Atlantic earlier this month. It’s the kind of time it takes to separate truth from myth when it comes to what happened in New Orleans in the days, weeks, and months after the storm made landfall there on Aug. 29, 2005.

One of the most affecting parts of the series is staying with individuals’ experiences as the show moves through the timeline of the storm and through the years since. “Floodlines” isn’t merely a collection of anecdotes. Its stories are able to better illustrate the emotional toll of Katrina because of how it follows people at each stage.

So the main participant in the series is not one of those national heroes or villains. At the time of storm, Le-Ann Williams was 14 years old. “Floodlines” details city evacuations, conditions at the Ernest Morial Convention Center (which housed displaced residents, even as minimal federal resources were sent to help the people there), and the struggles to find stability in other cities before individuals and families could return to their neighborhoods.

Le-Ann’s life intersects with all those ideas. Having her be an instrumental figure in the podcast’s portrait of that time period was an anchor point, one that the team realized shortly after meeting Le-Ann through New Orleans-based journalist and “Floodlines” editorial advisor Katy Reckdahl.

“It was clear as day after talking to Le-Ann. After going back and listening to it, we knew she was the heart and soul of this thing. There was no argument about it. It’s one of the few things we did not argue about as a team. We were blown away. The shape of this thing would have been entirely different, and probably inferior, had we not been lucky enough to meet Le-Ann,” Newkirk said. “She is a dynamic storyteller, who has an uncanny ability to remember details of certain events. She’s a seer, almost. Whatever happens with this podcast in the future, I think she should be at the at the forefront of it, and should be in people’s minds.” 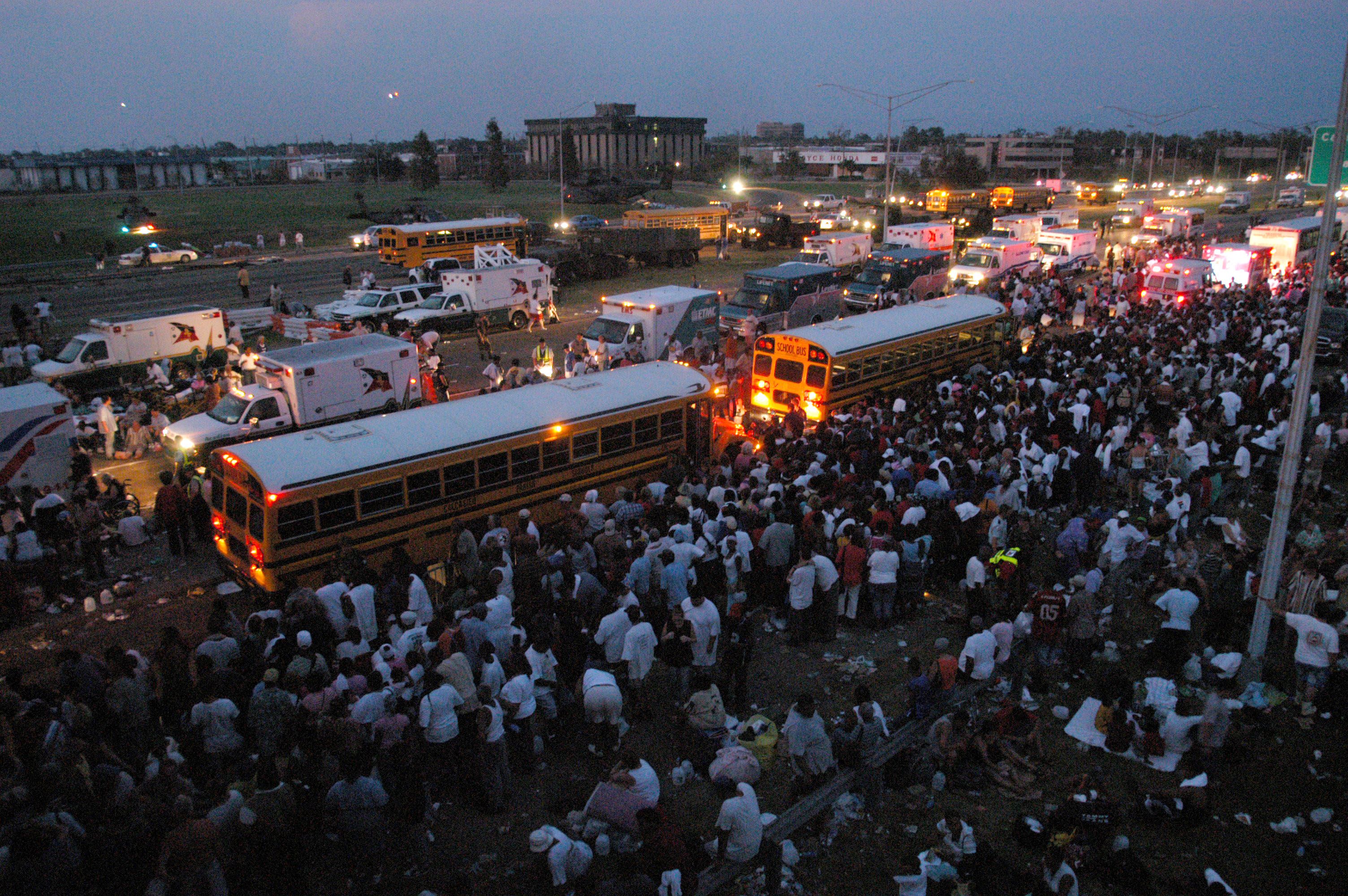 Rescue efforts in New Orleans in the days after Hurricane Katrina.

Over the course of eight episodes, “Floodlines” emphasizes the extent to which this storm was more than a few days in August and September 2005. The distrust that had lingered over the course of centuries was not going to dissipate, even if every roof was replaced and every family got to return to their respective living rooms. When asking participants to share their memories from that time, Newkirk and the rest of the team made sure that their interviews took great care to not exacerbate the pain that for many is far from distant.

“We were helped out by the folks at the Dart Center on trauma reporting, on the best practices on how to do this in a sensitive way,” Newkirk said. “One of the main principles is: we don’t want this project to just be about this disaster, this bad thing. I want to talk to people about what they remember about their childhoods. That adds not only richness to the story, my favorite pieces of the story don’t have anything to do with the flood. In the actual interview process, it makes it easier to talk about the hard things.”

Another strong thread in “Floodlines” is the disconnect between what occurred in New Orleans over those weeks and the prevailing public perception of what did. The series groups together various instances where rumor turned into assumption and then grew to “fact” in the minds of viewers and listeners across different networks.

“Our archival lead researcher Kevin Townsend went to the Library of Congress and the Vanderbilt broadcast library and came back with hundreds and hundreds of hours. We had every single major evening broadcast for the entirety of the crisis, which is an overwhelming amount of information to have,” Newkirk said. “But also it helped us. We had a rigorous, systematic approach to logging it, tagging it to seeing was happening. It was almost like looking at ‘The Matrix.’ Different individual reports amplified within this echo chamber before we even knew about echo chambers. On the other side of it, certain people who were diligent, who were interested in holding power to account eventually helped course correct.”

As worldwide developments over the past few weeks have led to confusion and uncertainty across so many spheres of public life, it’s worth listening to “Floodlines” to hear how biased and uninformed dissemination of information can have both immediate and lasting consequences. There’s an impenetrable haze that can (and does) hover over unthinkable events. Being conscious of that idea is a key step.

“There’s very deserved criticism of the media, especially in the first few days. But I think we do also have to acknowledge that everybody was operating in a state of what researchers like to call ‘disaster myth.’ And we’re seeing it happen now. There is always going to be heightened misinformation and disinformation at the beginning of a crisis. And it is difficult even for experts, and for veteran reporters sometimes to cut through that,” Newkirk said.

Still, despite the cloud of uncertainty, Newkirk and the team noticed particular patterns among the stories that attempted to right the record in the immediate wake and the years since.

“The people who eventually got it right, they were pretty good about making sure they verified stories. Often times, they were cutting against network or newspaper or magazine priorities on speed. It’s almost impossible to do that kind of reporting and be the first out. That’s just the way it is,” Newkirk said. “I think they were keen on interviewing people who were actually on the scene. It’s maybe one of the most dramatic changes in the reporting that week, as you go from reporters who are coming down taking stories secondhand from officials, who aren’t necessarily developing rapport, or who are just short on sources. The people who come out and do the good reporting are the folks who are going into the Convention Center, talking to the people who are there experiencing it, and bringing those stories back to the people who are controlling the narrative at the top and asking questions.” 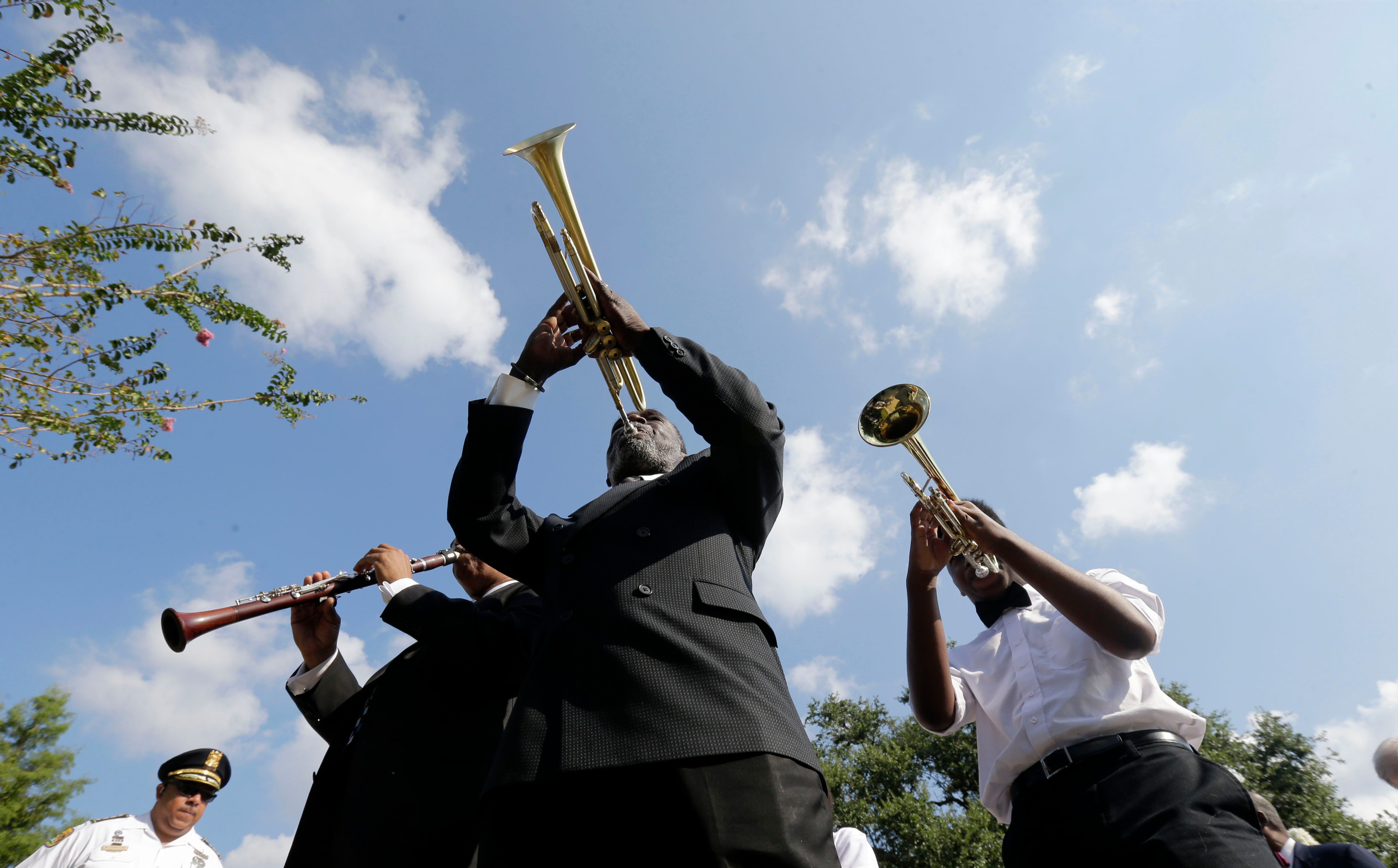 Musicians in New Orleans during a ceremony on the 10th anniversary of Hurricane Katrina.

Most senior-ranking government officials who were instrumental in authorizing and coordinating Katrina relief efforts are — or long have been — unwilling to go on record about what guided their decisions in those crucial early days. “Floodlines” finds one unlikely exception: former FEMA director Michael Brown. A marathon six-hour interview between Brown and Newkirk forms the backbone for the series’ final episode.

That interview, included at great length in the series’ final episode, really does play out as a conversation. Though Brown is asked for various explanations and rationales for key decisions and oversights, he and Newkirk work through brand new considerations. Even after a decade and a half of revisiting and reckoning and self-reflection, unprecedented situations have a way bringing up those kind of ideas when approached in different contexts.

As the world finds itself in a current crisis of unknown magnitude, there’s a chance to hold people in positions of authority accountable for their actions. Some realizations will be impossible to happen without hindsight, but as “Floodlines” outlines the consequences for the choices made and not made, it connects them to the warnings of the past.

“I believe this is a long work of accountability journalism. We look at the ways people, systems failed. We’re reaching towards something I believe that’s a little bit more visceral: What are the patterns behind why things go wrong, why things happen, why things happen to certain people? With more and more additions of interviews with people who went through it, our questions got better. Our ability to provide nuance got better,” Newkirk said. “Obviously, the priority for me is making sure this is a service to the folks who lived through it, to the folks who are in New Orleans, who are from the Gulf Coast. But I do think there’s no question that this is a story that says something about America and Americans, and why we all reacted to it in such a sensational way.”

And those reactions have universal effects. In his first piece for The Atlantic after the release of “Floodlines,” Newkirk argues that the impact of the current health crisis on the youngest generation will likely be more immeasurable than we can imagine now. Seeing what Katrina did to the children and teenagers of New Orleans, how they still carry those memories with them almost 15 years later, he maintains we should be mindful of how seismic changes might shift how they see the world.

“They are the ones who are going to inherit all the different traumatic things that happen to the economy, to our healthcare system, to our politics, to our ways of being. We also know these things have much worse effects on kids who are poor, who are racial minorities, who live on the margins of society already. We generally do not do a good job of prioritizing their well-being long term in these types of scenarios,” Newkirk said. “That’s what I think was the most heartbreaking lesson from Katrina. We failed a generation of kids in the region. And maybe it’ll be a bit different because it won’t just be a region. It’ll be a world. It’ll be a country. If we don’t think about that lesson from Katrina now, I think we are at risk of failing another generation.”

All eight episodes of “Floodlines” are now available to listen on The Atlantic here or on the podcast app of your choice.