This snappy indie comedy by Ravi Kapoor sees a group of Indian American teenagers hatch a harebrained plan to steal a bag of diamonds. 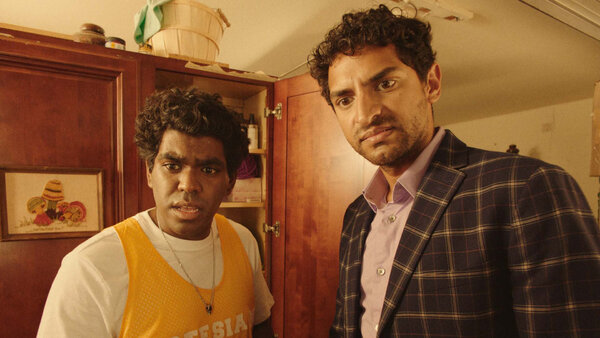 Colorful and handsomely composed like a Wes Anderson movie, but far from that director’s world of gloomy, globe-trotting dandies, “Four Samosas” is a jovial romp through the Indian enclave of Artesia located outside of Los Angeles.

The film, written and directed by Ravi Kapoor, is steeped in the traditions of Indian culture and its cuisine. It’s a carousel of sari shops and curry stands — bursts of sparkly, Bollywood-inspired dance numbers as well. Inside jokes that might only perk the ears of other Indian and Indian American viewers are scattered throughout, too — there’s a shop girl with a perpetually bobbing head, and a general emphasis on the maintenance of one’s eyebrows — but this quirky comedy’s snappy humor and winsome (if slightly amateurish) cast should make everyone feel right at home.

Vinny (Venk Potula), a charismatic wannabe hip-hop musician, mills about town with his second-in-command, pining over his nihilistic ex-girlfriend, Rina (Summer Bishil). Turns out Rina is engaged to Sanjay (Karan Soni), a goat-poop recycler who, douchey as he may be, also makes good money off his smelly cash scheme.

The revelation prompts a particularly harebrained plot: steal the diamonds that Rina’s father has locked away for her wedding — to, uh, pay for Vinny’s aunt’s surgery, of course. The duo join forces with a Hermione Granger-esque brainiac, Anjali (Sharmita Bhattacharya), and an unusually industrious computer engineer, Paru (Sonal Sha), to infiltrate Rina’s dad’s grocery store.

But the endgame matters little — “Four Samosas” is all about the team’s goofs. They’re not particularly original (there are silly disguises and a marathon-eating competition), but Kapoor’s timing and the actors’ commitment to the bits pull it off.

And, unlike so many new movies that seem to be algorithmically manufactured to appeal to diverse audiences and tick the boxes of representation, “Four Samosas” feels organic and true as a slice of Indian American life — even if it’s all fun and games and movie magic.