Good Morning Britain presenters Piers Morgan and Susanna Reid were forced to apologise to viewers after guest Dizzee Rascal swore live. The rapper and Morgan descended into a heated clash during which Dizzee told the GMB host the would “p*** off both sides” of the BLM debate with his comments. Morgan and Reid immediately apologised to their audience before bringing the discussion to a close.

Morgan questioned Dizzee Rascal over his views on the Black Lives Matter movement but the rapper and songwriter insisted he would not be swayed from the topic he had been invited to discuss.

The GMB guest slammed the presenter saying ‘I am not the black spokesman’ as he said he would not make comments on the issue so early in the morning.

Dizzee Rascal said: “You know what you need on here? You need Akala. Pick up Akala.

‘We are not going to fall out but that’s the spokesman for something sensible. I’m not just going to say anything…I’m just going to p*** off both sides.” 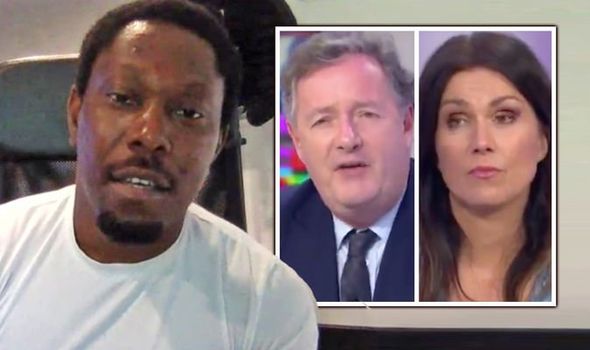 Morgan insisted Dizzee did not have to make a comment but said he was interested in the rapper’s opinion because of his insight as a black man.