Good Morning Britain has been focussing on the coronavirus a lot over the past week. As the pandemic grows, and indeed as the UK’s lockdown has become more strict, the ITV show has become stringent on giving out information about the crisis and discussing the announcements made by the government. Today was no different as Ben Shephard and Kate Garraway welcomed a panel of guests onto the show, via video link, to discuss the latest developments.

Earlier this week, Rishi Sunak announced a financial package for freelance workers and self-employed workers to help with financial strain due to the virus.

In an interview with Iain Dale and former Home Secretary Jacqui Smith today, the panel discussed how these new parameters will help workers.

However, during the interview Dale dropped a lewd comment, leaving hosts Ben Shephard and Kate Garraway beside themselves.

During the discussion about self-isolation, Smith confessed she was “missing her caravan in Wales”. 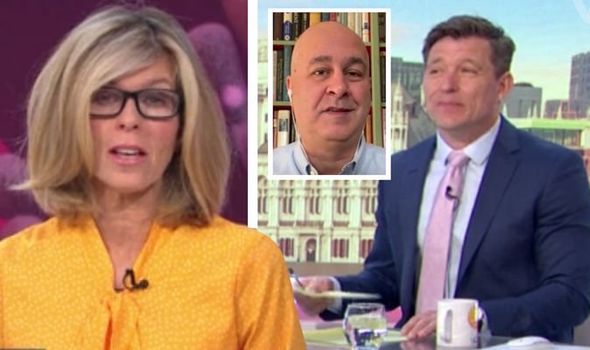 Unfortunately for her, because of the lockdown, she hasn’t been able to take any trips with her beloved caravan.

But as the discussion was wrapping up, Dale dropped an unbelievable comment, leaving the entire panel in shock.

As he dove into the chat, he announced: “Can I just say something about what Jacqui said about her caravan?

“Because if there’s one thing she’s taught me over the years, is that if the caravan’s a-rocking: Don’t come a-knocking!”

Jacqui leapt back in disbelief as she chuckled, as Shephard and Garraway guffawed at the unexpected gaffe.

Shephard yelled: “No, Iain no!”

He then referenced a recent event which saw Dale standing up during an interview on Good Morning Britain, revealing he was wearing tracksuit bottoms.

Shephard went on: “No no! You did a virtual standup!

“You literally stood up with words!”

Garraway yelled: “We nearly escape without an Iain viral moment!”

Earlier this week Garraway confessed some fears for herself after it was announced Prince Charles has been diagnosed with coronavirus.

Speaking to Royal commentator Emily Andrews, Garraway and Shephard grilled the expert on if they were at risk.

Kate jumped in to say: “Yes, but we didn’t shake hands, Emily, but we were very close.”

Ben added: “But will he contact people he touched and say, look, I have now tested positive?”