How Julie Taymor Brings Visual Flair to ‘The Glorias’

The director discusses a scene from her film about the life of Gloria Steinem, featuring Julianne Moore and Alicia Vikander.

‘The Glorias’ | Anatomy of a Scene

My name is Julie Taymor. I’m the director and co-writer of The Glorias. “Do you think that there is a paradox between women’s attitudes toward the fact that they don’t want to be treated as sex objects and the fact that you dress very sexily?” So we’re about halfway through the film and we have had Alicia Vikander play Gloria from age 20 to 39 or 40. And in this film, I have four Glorias— the six-year-old, the 12-year-old, Alicia plays this age, and Julianne Moore plays 40 to 80. At this point, Michael Lowry, who is playing the interviewer, is commenting on her clothes. He alludes and flirts to the fact that she is a sex object. And this is a point where I have her, Alicia, replaced by Julianne. Julianne then takes the seat, and so she does talk to the interviewer about the fact that this black t-shirt, black pants, and boots— it’s her uniform. And after she does that, the audience starts to see what’s actually in her head. And I go into a surreal sequence now. And now I allow the other Glorias to appear. The first one to come is Alicia comes back dressed like a nun in a kind of Handmaid’s Tale-ish— Sandy Powell did the costumes— red garment habit with this incredible nun white hat that’s like The Flying Nun hat. And then the gust of wind blows it up. And underneath, you see the Bunny costume, because the Alicia Vikander actor played the part in Gloria’s life where she went undercover as a Bunny in the Playboy Club to talk about working conditions. And then the little Gloria, Ryan Kira Armstrong, comes running up, jumps on the platform and onto the lap of the interviewer, and whispers in his ear— “What’s a sex object?” It breaks your heart in a way. Then we go to the 12, 13-year-old Gloria, played by Lulu Wilson. [MUSIC PLAYING] And once we do that, I go into full surreal mode with the tornado inspired as a true homage to The Wizard of Oz with Elliot Goldenthal’s extraordinary score. It’s the one place where he uses full orchestra, and it’s scary and absolutely helps with the scene. [MUSIC PLAYING] I went full out into shooting the women— the four Glorias in green screen, where we had to have a full wraparound green screen and a huge crane that Rodrigo Prieto, our spectacular DP, operated. And we had each one, one by one, on wires. And then the real work comes in post, because you cut the scene together, and then with fabulous visual effects houses, we put together the tornado in post. We’re back to reality. So we realize that it’s just two or three seconds of a pause, where Gloria has not found the words. “Could you rewind that, please?” – [GARBLED SPEECH] “What were you saying?” “I hope you forgive our masculine notion that you’re an absolutely stunning sex object.” “Forgive.” “And forget.” 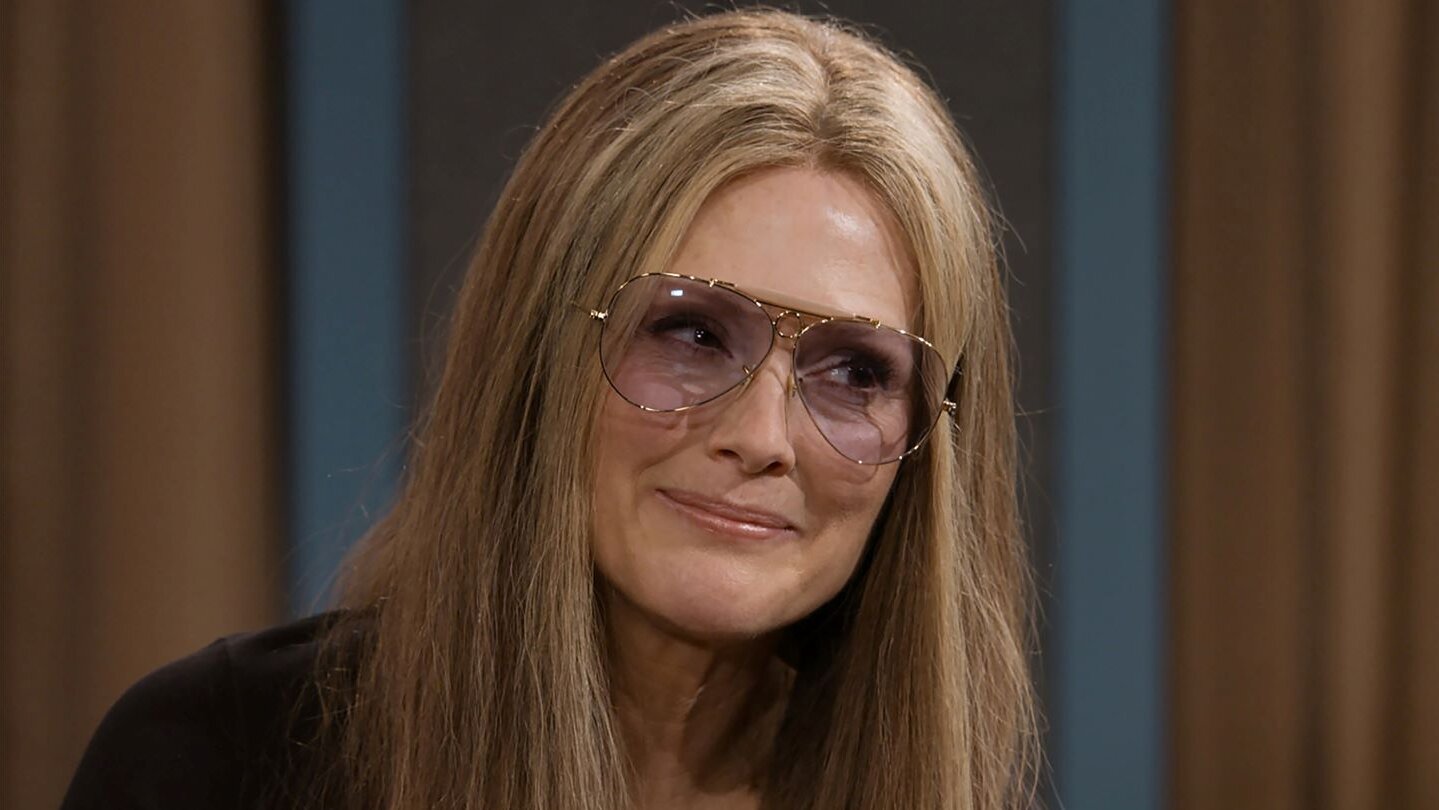 In “Anatomy of a Scene,” we ask directors to reveal the secrets that go into making key scenes in their movies. See new episodes in the series on Fridays. You can also watch our collection of more than 150 videos on YouTube and subscribe to our YouTube channel.

When an interviewer poses a sexist question to Gloria Steinem in the biopic about her life, a giant red tornado sweeps him away.

Or at least it does in Steinem’s thoughts. That sequence is one of a few moments of fanciful abandon in “The Glorias,” Julie Taymor’s drama that casts four actresses to play the feminist activist.

The scene begins during a television interview, with Alicia Vikander playing Gloria. But when the interviewer (Michael Lowry) says to her, “I hope you’ll forgive our masculine notion that you are an absolutely stunning sex object,” the casting of Gloria changes in the middle of the interview to Julianne Moore, then leads into the fantasy sequence of her response.

“I allow the whimsy of her imagination to say what she would say, could she say it,” Taymor said in an interview.

In this video, Taymor further explains the scene and how she put it together, from creative costuming (by Sandy Powell) to a sweeping score (by Elliot Goldenthal). And she discusses filming her performers on wires over green screen that would combine with visual effects into a sequence that pays tribute to both “The Wizard of Oz” and “Macbeth.”

Sign up for the Movies Update newsletter and get a roundup of reviews, news, Critics’ Picks and more.