EXCLUSIVE: Hulu has acquired the U.S. distribution rights to the comedy Everyone Is Doing Great which was created by One Tree Hill alums James Lafferty and Stephen Colletti. All eight half-hour episodes will premiere on the streamer on January 13, 2021. The first teaser can be watched above. 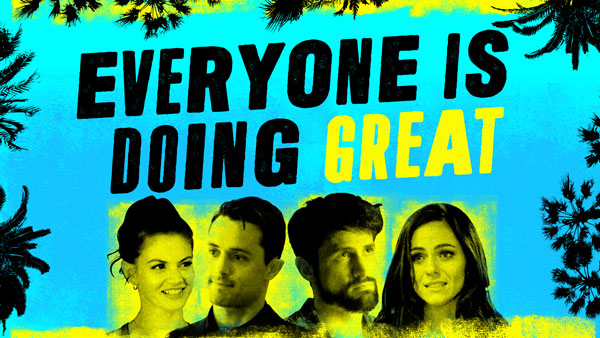 Written and produced by Lafferty (who can be seen in Disney+’s The Right Stuff) and Colletti (who appeared in Hit the Floor), the series was crowdfunded after the first two episodes hit the festival circuit starting with its big debut at the ATX Television Festival in 2018 (read Deadline’s interview with them from the fest here). The comedy follows Seth (Colletti) and Jeremy (Lafferty), who enjoyed the success of Eternal, a hit television vampire drama. Five years after their show has ended, they lean on each other as they awkwardly navigate the perils of life and love in a late coming-of-age.

“Distribution through Hulu was always our dream scenario, and we couldn’t be more grateful for the show’s opportunity to reach their audience,” said Lafferty & Colletti. “A massive thank you to all the supporters of EDG that helped us climb the crowdfunding mountain, and to the incredibly talented, hard-working cast, crew, producers, family and friends that have gotten us through the various stages of this journey. We feel the road taken to get here is emblematic of the story EDG tells, one that’s rooted in love, friendship and finding humor in the struggle to figure it all out.”

The comedy also stars Alexandra Park (The Royals, Ben is Back), as Andrea Davis, who is described as “a strong-willed, no bullshit, true talent”. She is married to Jeremy and supports him both emotionally and financially. Park also serves as a co-producer. Everyone Is Doing Great also features Cariba Heine (Designated Survivor) and Karissa Lee Staples (S.W.A.T.).

Everyone Is Doing Great is executive produced by Ian and Eshom Nelms, Michelle Lang, Rocque Trem and Johnny Derango, with Ngoc Nguyen producing and Stuart Lafferty co-producing. Lafferty helmed the series with Colletti sitting in the director’s chair for episode 6.