In ‘M3gan,’ a Detective’s Guilty Laugh Speaks Volumes About Him (and Us)

What’s so funny about his inappropriate response to a boy’s injury? The director pushed to keep the bizarre moment in the film, for good reason. 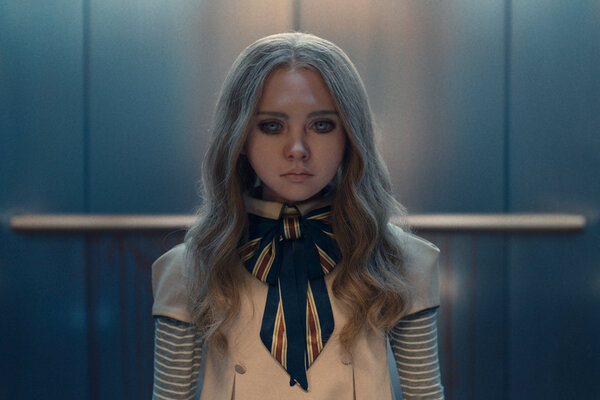 The strangest moment in “M3gan,” the hit horror-comedy about an android gone awry, is not a flamboyant robotic glance or an elaborately staged kill, but a guilty chuckle.

It occurs when the body count starts to rise, the plot speeds up and a rugged detective (Millen Baird, desert dry) arrives at a suburban home as part of an investigation. You’ve seen this type from countless procedurals: sober, rumpled, furrowed brow. His purpose is to make the protagonist, an engineer played by Allison Williams, nervous and move the story along. But after informing her that a boy who recently died had his ear ripped off, this familiar type does something unexpected: He cracks up. “Sorry, I shouldn’t laugh,” he says, course-correcting.

This whole exchange happens so fast that it’s easy to miss how bizarre it is. It’s one thing for a child to be gruesomely murdered in a PG-13 movie, but another for a grown man to be somewhat randomly amused by it. The most fascinating part is that both times I saw “M3gan,” this got a huge laugh. One of its producers, Adam Hendricks, told me no scene received more glowing feedback, which raises an uncomfortable question: What’s so hilarious about chuckling over the death of a child?

The film’s director, Gerard Johnstone, told me that in one of his last passes at the script, he inserted the line to add some levity to what he worried was a blandly functional scene. He said the audience laughed because the transgression and apology subverted the traditional trope of the serious, just-the-facts detective. But Johnstone also made it clear that he never analyzed the line much. “It just made me laugh,” he said on a video call from New Zealand, where he and Baird are from. He did add that he always had a specific sound in mind. “Had to be a scoff. If it was big it would be too broad. It’s one of those funny things: so specific.”

When he pitched the idea, there was skepticism. The producers figured it wouldn’t make the final edit. Johnstone recalled the screenwriter, Akela Cooper, advocating it be cut. “I remember my editor saying: ‘If there’s one scene that’s got a bull's-eye on it, it’s this one,’” Johnstone said, even suggesting there were moments he was losing faith. But he insisted that they keep it until the test screening, where it got the biggest laugh in the movie. The snicker stayed in the picture.

One explanation for its success is that inappropriate laughter is inherently fun. Kids whispering in libraries know this. So do theater audiences at the Broadway revivals of “The Music Man” and “Funny Girl,” who, on the nights I attended, exploded with laughter when the stars broke character and chuckled. Whether this was planned or not, this kind of breaking of the fourth wall is good for an easy laugh. And my initial read of the scene in “M3gan” is that there was an element to its ridiculousness that suggested a similar wink at its viewers.

The laugh operates like a message to the audience that this is the kind of campy movie where it’s OK to laugh at dark things. The detective apologizes, but you don’t need to. Giving viewers permission to enjoy violent or immoral acts is surely far more central to the pleasure of horror — and art more generally — than most fans or critics allow. We aren’t drawn to stories about maniacs, mobsters and serial killers only so we can be reminded of how bad they are.

“There’s a lot of inappropriate humor in the movie,” Johnstone said. “In the test screenings, people said, ‘I’m not sure if I should be laughing.’ A scene like that should help people figure that out.”

And yet, laughing at death is not that uncommon. Only a few months ago, in an interview with Nurse Blake, a comedian who worked as a caregiver in hospitals for years, we discussed how the conversations in emergency rooms were filled with dark jokes. But you don’t need to regularly see dying people to rely on gallows humor. In his solo show “The Old Man & the Pool,” Mike Birbiglia did a whole bit that baited audiences to laugh at a dead person, then chastised them about it, inviting them to laugh at themselves and enjoy the guilty pleasure.

In a recent podcast with Conan O’Brien, the stand-up Bill Burr described how, when faced with the most horrible things in the news or in movies (assault, death, fire), he couldn’t help but laugh. In an aggrieved tone, he asked: Am I supposed to only moan and sob at the drumbeat of terrible events? Still, in a video clip of the conversation, Burr, not to mention O’Brien, looked uncomfortable with this confession. But what if he’s just saying out loud what many people experience and won’t admit to?

Humor isn’t just a coping mechanism. It’s so intricately woven into daily life that you can’t easily divorce it from tragic situations.

What if laughing at a boy getting his ear ripped off is not merely Grand Guignol comedy, but also a realistic response to an extreme situation, by a person, incidentally, whose job probably invites him to see murder and mayhem as mundane.

What great art tells us again and again is that laughter and crying are not that different, both releasing tension and easily bleeding into the other.

In “Breaking Bad,” Walter White, in a memorable moment of desperation inside the crawl space in his home, bursts out sobbing, which turns into disturbing cackles echoing through the house. At the end of the original “Texas Chain Saw Massacre,” the final girl, Sally Hardesty, flees a masked killer by crawling into the back of a pickup truck, where her tears and screams turn to jittery laughter.

Such a conflation of emotions goes back centuries, at least to Shakespeare’s “Titus Andronicus,” a preposterous horror-comedy of the Elizabethan era that makes “M3gan” look prim and tasteful. When its title character laughs after he’s sent the decapitated heads of his sons along with his own severed hand (Google it), did the ticket buyers at the Globe smirk? What about when Titus’s brother retorts, sensibly: “Why dost thou laugh? It fits not with this hour.” The response can be played madly, exhausted or something in between: “Why, I have not another tear to shed.”

Maybe the same is true of the chuckling detective. We meet him so briefly that it’s hard to know, though don’t be surprised if you see him again in the sequel, which has already been announced. Johnstone, who plans on directing it, made a point of reminding me that the police character didn’t die.

What makes that detective funny might not be that his laugh goes against the grain of expectations so much as that it accurately reflects the nature of human beings. People are unpredictable and awkward and paradoxical. Studio genre movies tend not to be, filled with familiar devices, types, rhythms. That laugh stands out because it adds the nonsense of real life to the mix. It’s the one moment in “M3gan” so weird that I can’t imagine an artificial intelligence coming up with it.