Alain Delon, Romy Schneider and Jane Birkin are among the reasons this restoration of a French thriller is worth watching. 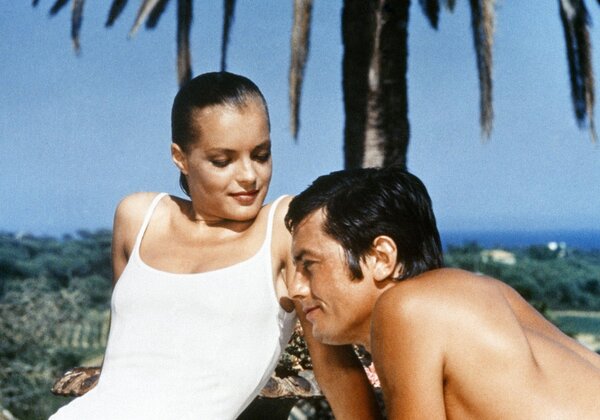 “La Piscine,” made in 1969, is best known in the United States for its remake, Luca Guadagnino’s frisky, borderline frivolous 2016 “A Bigger Splash.” The release of a pristine restoration of the original, directed by Jacques Deray and starring Alain Delon, Romy Schneider, Maurice Ronet and Jane Birkin, should bolster this striking movie’s reputation.

But as a thriller, it’s a very slow burn. Into the couple’s idyll drops Harry (Ronet), an old friend of Jean-Paul’s and an erstwhile lover of Marianne’s. A wealthy purveyor of pop music, he pulls up to the villa in a snarling Maserati with a surprise in tow: his teenage daughter Penelope, incarnated by the willowy, whispery Birkin.

Almost 10 years after his landmark roles as Tom Ripley in “Purple Noon” and Rocco in “Rocco and His Brothers,” both in 1961, Delon still retained every iota of his ultra-sultriness. In dramatic roles, the actor, his sexy sleekness notwithstanding, tends toward a solemnity, and that suits him well here. Jean-Paul, a failed writer who’s now an ad executive, is a sullen puzzle with a hint of menace.

Schneider and Birkin do well as independent-minded women who are nevertheless played as pawns by the males. But Ronet almost walks away with the picture. Harry’s big grin is offset by a barely visible raised eyebrow of derision, and his passive-aggressive manipulation of Jean-Paul is chilling.

Pretty people behaving poorly in beautiful settings is something we don’t see as much of in cinema as we used to. This is a master class in the subgenre, and one of unusual depth. (Deray worked on the script with the prolific Jean-Claude Carrière, who recently died). In the movie’s last third, Jean-Paul shows a shocking sadism. Once Jean-Paul and Marianne are exiled from their metaphorical Eden, they remain fully clothed for the rest of the picture, and the movie’s color palette becomes more autumnal. Nifty nuances such as these make “La Piscine” a film experience both pleasurable and discomfiting.

La Piscine
Not rated. In French, with subtitles. Running time: 2 hours 2 minutes. At Film Forum in New York. Please consult the guidelines outlined by the Centers for Disease Control and Prevention before watching movies inside theaters.