Lucy Lucy Apple Juice will not be the legacy of Vanderpump Dogs thanks to, well, Vanderpump Dogs, the TV show. Lisa Vanderpump’s rescue center is at the center of a new Peacock reality series, which is way more House Hunters-like than The Real Housewives of Beverly Hills or, as some might think, Lisa’s other show, Vanderpump Rules. The focus is on the four-legged residents of LVP’s West Hollywood storefront, not the two-legged people who work there.

“No, no, no, no, it’s not at all like Vanderpump Rules,” Lisa makes clear, speaking with ET over video chat from her Villa Rosa estate in Los Angeles. “This is a passion project, and this is about finding the perfect home, because a lot of these dogs have very sad stories and they come to us and this is their second chance. No, no, there can’t be any emotional dysfunction in rescue. It’s hard enough and emotionally challenging enough as it is.”

“Now, if I had staff in SUR that were as diligent at getting the crispy chicken to the table as [my rescue staff is] getting the dogs the right home, it would be much easier,” she cracks. “Maybe nobody would watch [Vanderpump Rules], but I’d love it.”

Each episode of Vanderpump Dogs sees Lisa and her rescue center staff match potential pet parents with their perfect pooch, with personal consultations done by Lisa herself. The series is centered around the joy of man’s best friend, not the drama at the heart of Lisa’s other Bravo-related gigs.

“It’s like, who’s rescuing who?” Lisa asks. “We’ve rescued out 2.5 thousand dogs now, or nearly that — not worldwide, obviously more than that worldwide — but domestically, and finding [them] happy homes. And you’ll see some of the stories, some of the dogs have sad situations, but the show’s got a real feel-good factor. A lot of poignancy, heartbreak of some of the stories we’ve heard before they get to us, and then the rehabilitation.” 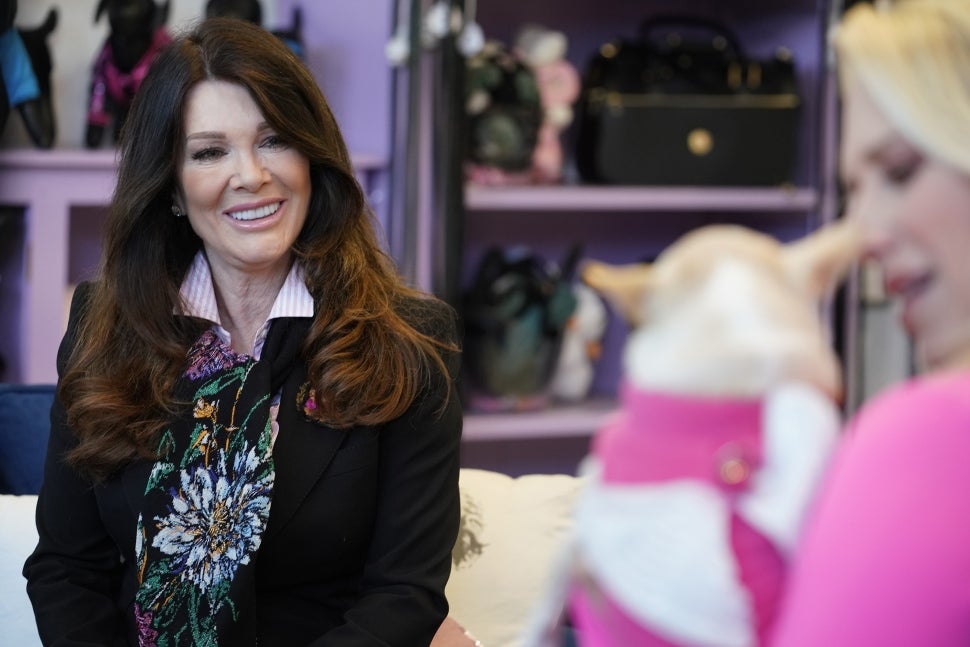 The last time Lisa’s Vanderpump Dogs rescue center made its way to TV was on her final season of RHOBH, the show’s ninth, on which much of the drama focused on whether Lisa and/or her staff tipped off the tabloids when it came to the somewhat complicated story of how Lucy Lucy Apple Juice, a dog co-star Dorit Kemsley adopted from the center, wound her way back up at said center, allegedly making a detour at a kill shelter in the process.

“Well, that was one, one of the things that we really do try to do is, stop dogs from ending up in shelters, you know?” Lisa now remarks. “So that whole situation was unfortunate.”

As Lisa removed herself from the world of Housewives, rumors started circulating that a Vanderpump Dogs spinoff was in the works. Former co-star Lisa Rinna took issue with that, taking to Instagram Stories to tell her fans, “I’m a hustler. I make no bones about that. I think you get paid for what you do. So my feeling is, if we indeed are servicing a spinoff, we should be paid for it. I am so happy for all of us to use this platform for makeup lines, bathing suit lines, network TV shows, restaurants, [charities], clothing lines, fitness empires, you name it. I support these women, 100 percent. But if you are going to use our services without telling us — that we are playing out a storyline to launch a pilot for a new show and you don’t compensate us extra for that — yeah, I’m a hustler. I get paid for what I do. So,  if this indeed becomes another show, my lawyer will be calling.”

Once the show was formally announced, Rinna doubled down, with a second story: “I was right all along. Everyone lied to my face about this and here we are. So, maybe you’ll believe me this time around.” 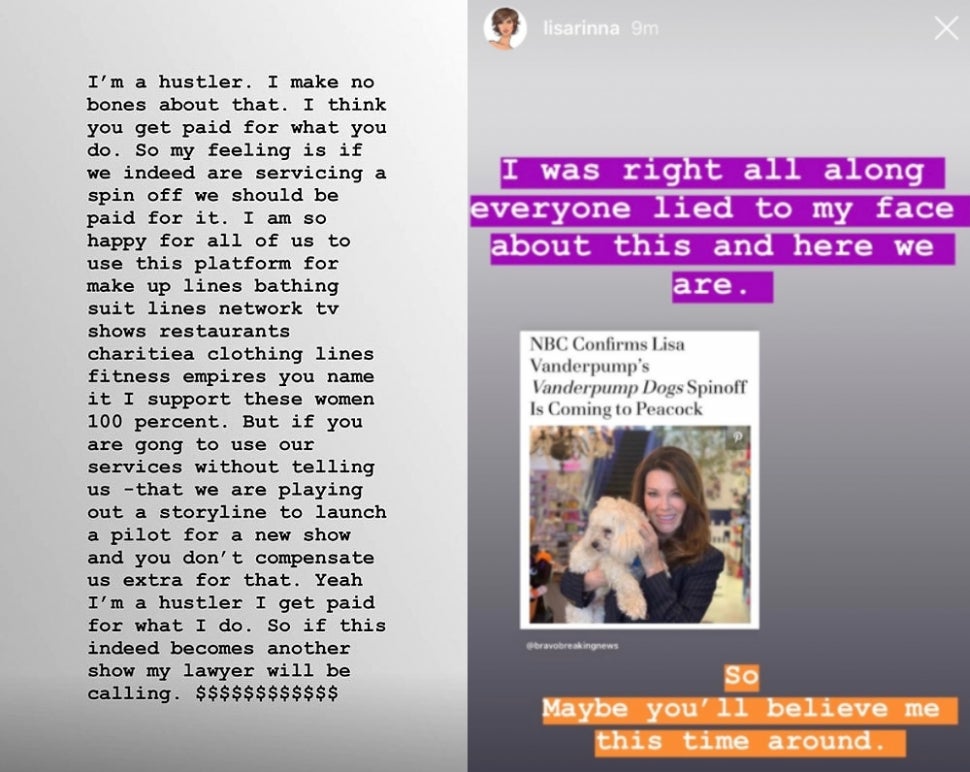 “Well, does everybody — do they deserve a check for Overserved as well?” LVP queries in response to being asked about her former co-star wanting a cut of Vanderpump Dogs, referencing her other spinoff, which aired on E! this spring, in the process. “Because that was [also filmed] at my house. What’s that got to do with anything? You know, I don’t know who says that. I have fond memories of Beverly Hills Housewives. My favorite tagline was, ‘I’m passionate about dogs, just not crazy about b**ches.'”

While it’s been nearly two years since Lisa last appeared on Housewives, the unfinished business she left behind (viewers and the women never got a crystal clear answer about the Lucy Lucy tabloid tale) has left room for new drama to emerge. Just last month, Lisa and former friend Kyle Richards got into a back-and-forth after both women wound up at the same restaurant, SHU – Sushi House Unico. Kyle dined with one of the executive producers of RHOBH (as well as Lisa’s many spinoffs), and Lisa cheekily (she says, Kyle seems to disagree) sent her unpaid bill over to the EP once she finished eating. When Kyle left, she joked to paparazzi that Lisa “dined and dashed,” noting the producer refused to pay LVP’s tab. That comment created a she said, she said tennis match online between the pair. Lisa gave interviews calling the whole thing a joke, confirming she left her own payment information with the restaurant, which wound up charging her when the producer returned the check.

That same night, as Lisa exited the eatery, she stopped to sign a Housewives cast photo, taking time to draw mustaches, squiggles and Xs across her one-time castmates’ faces. The pic made its way to the fan blogs, sparking a second scandal.

“She put Xs through our faces, and mustaches on Lisa Rinna and me — which I know some people will say, ‘Oh, that’s so funny…’ — but she ruined the photo for this guy,” Kyle said. Teddi added, “He could’ve gotten everyone’s [autograph] and [been] excited about it, but she had to go through and ruin it.”

“I got three Xs,” Teddi then noted. “I’m the only one who got three Xs. … The thing that’s bizarre to me is, she’s going to go about this like she’s so unbothered, she doesn’t want to do this, why is she going out of her way to consistently shade– she’s gone on multiple podcasts talked badly about me, goes out of her way to do things to paparazzi and TMZ to make everyone else look bad. If you’re moving on, move on!”

“Again, Kyle makes it about her and says it was a kid’s picture. It was a paparazzi guy’s,” Lisa tells ET. “You know, when they have the 10x12s? He said, ‘Will you sign this for me?’ So I said, yeah, and I thought, well, I’ll also draw a little mustache on Kyle. And then I thought, OK! And he was loving it and so excited. But Kyle started saying it was a kid’s photograph. It’s the paparazzi guy that stands outside SHU — dark-haired guy, very sweet guy — at Beverly Glen. He’s probably going to sell that picture for a fortune, as they always do. It wasn’t a kid’s picture. They don’t walk around, kids with 10x12s of Housewives. Just another attempt to try to malign me. Like she said, I dined and dashed. That’s why I had to show the receipts of my bank account. Now there you have it.”

When pressed why Teddi earned a full-body cross-out in the pic, Lisa slyly replies, “Oh, well, I think you know the answer to that.” For those who don’t recall, Teddi found herself in the middle of much of “puppy-gate,” as the Lucy Lucy saga was known, with LVP blaming the ordeal on her (and vice versa).

While Housewives is (mostly) out of the picture, Lisa still finds herself in the reality TV trenches with Vanderpump Rules, which just went back into production on a delayed ninth season, a delay largely due to the coronavirus pandemic.

“We’re already a third of the way in, and I’m telling you, you can tell they’ve been locked up for a year,” Lisa teases of what the cast has shot so far. “Everybody’s got a point of view, and they’re willing to air it and vent it. We’ve got a couple of new people. We’ve lost a couple of people along the way, but we’ve still got a big cast of people that are very familiar with each other — sometimes a little too familiar — but it’s got a lot of great energy behind it. And I’m surprised, actually, I thought it would be a slower start, but it’s not. It’s boom! Straight out the gate.”

Bravo fired Vanderpump Rules OGs Stassi Schroeder and Kristen Doute from the series last summer, after past racist actions toward former co-star Faith Stowers resurfaced amid the surge of the Black Lives Matter movement. At the same time, the network removed season 8 newbies Max Boyens and Brett Caprioni from the cast, citing the men’s years-old, racially insensitive social media posts. Months later, Jax Taylor and wife Brittany Cartwrightannounced they were parting ways with the show, and when Bravo confirmed season 9 was in the works, Dayna Kathan made it known she was no longer a part of the cast. 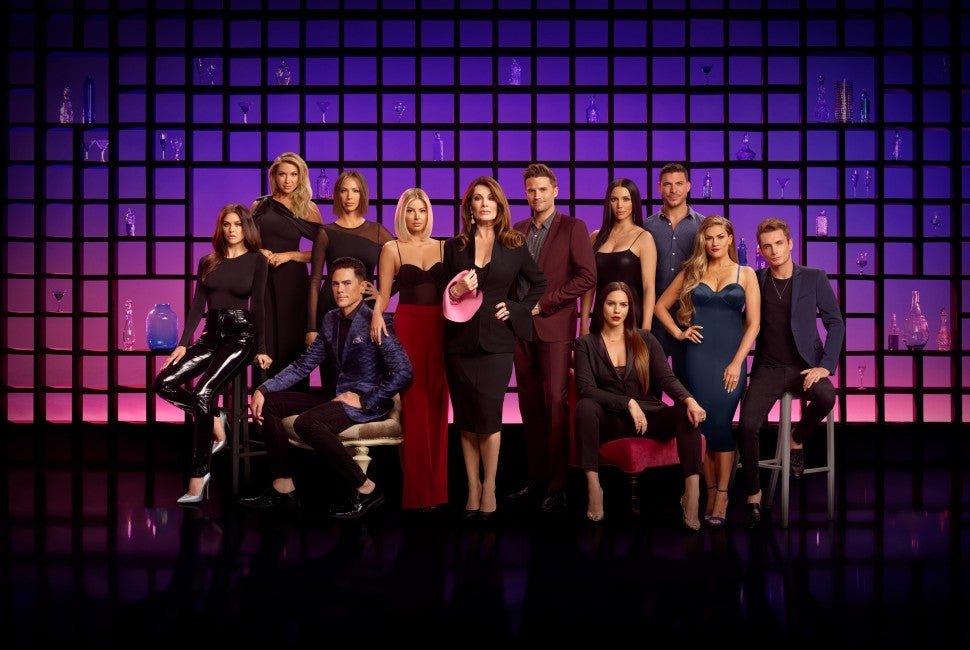 “You’re going to see, it’s a little more focused,” Lisa says, referencing the size of season 8’s ensemble, which neared 20 members. “Some people have a few more challenges, that’s for sure. But you’ll see, you’ll be invested in this one. This one will not disappoint you. It’s the same Vanderpump Rules, only different. But I think you’re going to love it.”

“James… sometimes he’s a little more complicated, and I have to manage him a little bit more as you will see, but congratulations to them,” Lisa offers in response to the news of James and Raquel’s engagement. “She’s the best thing that ever happened to him. But you really do see Raquel kind of blossoming, blooming the season, you really do. You see her, really, have a voice. She was very much like a deer caught in the headlights before, but now she’s, like, actually kind of really comes out of a shell. So it’s good to see.”

On that deer note, Lala famously called the SUR-ver a “Bambi-eyed b**ch” years ago. Lisa says expect those sort of explosive confrontations when the series returns to Bravo later this year.

“They’ve all got a lot to say, that’s for sure,” she notes. “I think it’s more mature, the show, but there are people that really like to have their opinion and that’s not going to change. And they’ve certainly got a lot of them. So it’s pretty convoluted. I’m surprised, actually, how amazingly quick, fast-paced and intense we’re in and we’re only a third of the way through, so it’s good.”

“A lot of stuff was festering where they say, OK, now I want to talk to you about what you said, you know?” she adds. “So there was a lot of that, but you know what? Give me anything, but don’t give me boring, you know?” 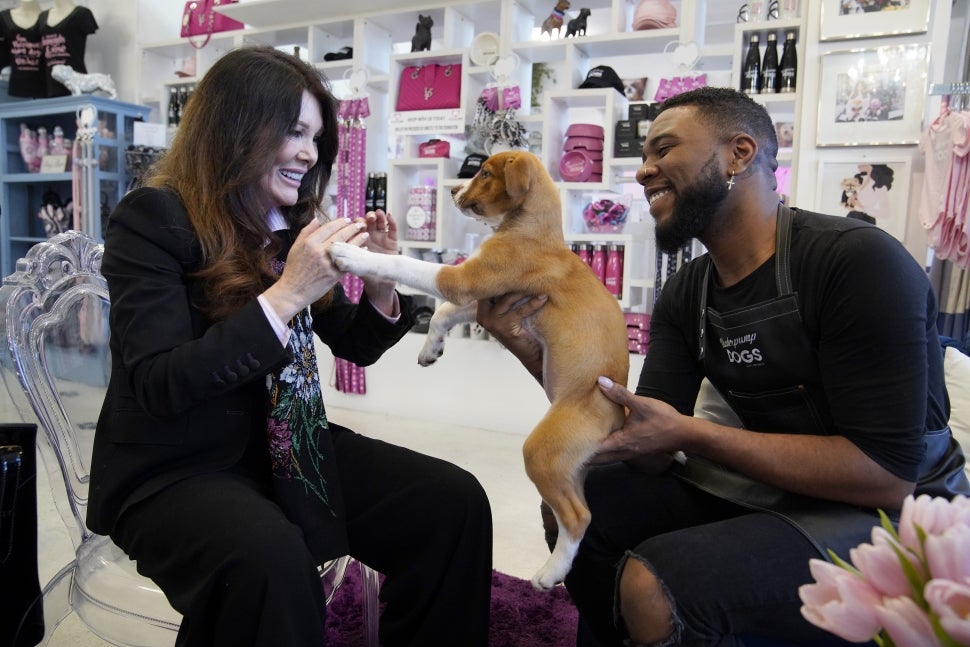 As fans eagerly anticipate the return of Vanderpump Rules, they can check out all six episodes of Vanderpump Dogs, when the full season starts streaming Wednesday, June 9, on Peacock. Lisa uses the words “passion and poignancy” to describe the freshman run.

“And you can watch with your kids, and I think everybody’s going to love it,” she says. “I’m very proud of it, actually.”