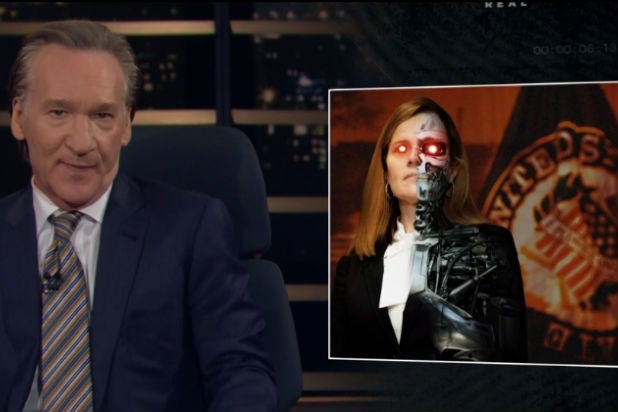 BIll Maher used the “New Rules” segment in Friday’s episode of “Real Time” to talk about the thing that mostly dominated the news this week — the grossly hypocritical rush by Republicans to install Amy Coney Barrett on Supreme Court — and specifically, he argued that one of the problems with her appointment is that Catholics are already over-represented on that body.

Maher also spent some time arguing that despite claims by Republicans to the contrary, it is absolutely appropriate to discuss and criticize Barrett’s fundamentalist religious views, because “being nuts is relevant.”

“Democrats have to stop talking about packing the Supreme Court because it’s already packed — with Catholics,” Maher said at the start of “New Rules.” “Roberts, Thomas, Alito, Kavanaugh, Sotomayor and Gorsuch, who I count as Catholic because he was raised Catholic and is now Episcopalian, which is just a Catholic who flunked Latin. And once Mitch McConnell and company are done FedExing Amy Coney Barrett to the bench, seven of the nine justices will be Catholic.”

Maher added that he has “nothing against Catholics, except my entire upbringing,” and that his issue is how Catholics make up around 20% of the U.S. population. “If seven out of nine justices were Jews or Muslims or Buddhists, would that be okay? And if faith is this super important element of life as Barrett and her Republican supporters say it is, shouldn’t we have a healthier balance on our highest court?”

Maher continued, noting that the fastest growing religion in America is the lack of any religion at all, which includes Maher himself. “We are 26 percent of the country — not anyone here, but of the country. Where’s our voice on the Supreme Court?” he asked. “And atheists actually make better judges because we don’t have to work to separate church and state. We’re not torn between rational decision-making and what it says in the old book of Jewish fairy tales.”

That’s when Maher began to talk more specifically about Barrett and her fundamentalist religious views. “In 2006, Barrett told a graduating class of law students, ‘keep in mind that your legal career is but a means to an end… that end is building the kingdom of God.’ No, it’s not. That’s not the point of a legal career,” Maher said. “And you pundits earnestly debating whether she will vote to overturn Roe v Wade: of course she will. She’s been groomed since birth to overturn Roe v Wade. She’s like the terminator. A robot programmed to fulfill one task. Except she wasn’t sent from the future, she was sent from the past.”

“Because here’s the truth about Catholics in America. There’s two types: scary and not scary,” he continued.

But what he called “another strain of uberconservative Catholics” are operating with “an agenda, and enormous and growing influence to achieve it,” he argued. “And it’s really about pining for a return to the middle ages when the church was the state. The attorney general is one of these people, so is the federalist society responsible for putting five justices on the court. The Knights of Malta and Opus Dei, whose members wear a little spiked chain around their thigh all day to remind them of you-know-who.”

“These old school Catholics, they play the long game,” Maher continued. “Amy Barrett has been on their radar since forever because she was raised in an extremist Catholic community called People of Praise, where a husband’s responsibilities included correcting his wife should she stray from the proper path. Uh huh. And where woman were called handmaids.” (This is true by the way.)

“Yeah, these are the folks who make Jehovah’s Witnesses go, ‘Shh, don’t answer the door.’ They speak in tongues, otherwise known as babbling.” Maher then showed a clip of 80s TV preacher and con artist Robert Tilton speaking in tongues, which sounded exactly like babbling.

“That wasn’t them doing it, but that’s what it is and they do it too, and now it’s on the court. It’s not wrong to call out nuts when shit is nuts,” Maher said.

Maher concluded by once again advancing his argument that it’s entirely appropriate to talk about Barrett’s fundamentalist religious views: “Amy Barrett this week said she had no strong feelings about climate change, but is very concerned about large belt buckles. Chuck Schumer said Democrats won’t make Barrett’s religion an issue, but they should, because being nuts is relevant.”