A trailer for the novelization of Quentin Tarantino’s film “Once Upon a Time in Hollywood” features some never-before-seen footage left on the cutting room floor from the movie’s theatrical cut, and among it are several new clips of Tarantino’s take on Charles Manson.

While “Once Upon a Time in Hollywood” has many supporters, many were surprised how little there was of Manson in the film, who was portrayed by actor Damon Herriman in what became little more than a cameo. But this latest trailer (shared via EW) suggests there’s a much more manic, zany side to Herriman’s performance that audiences never got to see.

While still brief, Herriman in the trailer can be seen wildly flailing as he spies Brad Pitt’s Cliff Booth on the roof of his house off in the distance, yelling at him and finally shouting “F— you, Jack!” There’s another brief scene talking about “Terry,” the man who previously lived in the house now occupied by Roman Polanski and Sharon Tate. It’s not much but suggests much more than the less than two minutes we saw of him when “Once Upon a Time…in Hollywood” hit theaters. 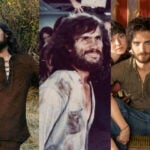 Herriman, who also portrayed Manson on “Mindhunter,” had previously said only a small bit of Manson footage was cut from the movie, but the moment that was cut out was, in his opinion, among Tarantino’s best writing.

“There was a scene that I thought was one of the best scenes I’ve ever read in my life, just on the page, I hope that scene does get released. I genuinely don’t know if it ever will,” Herriman told Collider. “He has shown an interest in going back to his older movies and making a longer version. Given this one was so long to start with, I think it would be a great candidate for that.”

The book’s trailer has other unseen footage as well, including a phone call between Leonardo DiCaprio’s Rick Dalton and his young screen partner, and another unfamiliar shot of Margot Robbie as Sharon Tate. 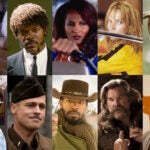 Tarantino is releasing a novelization of “Once Upon a Time…in Hollywood” on June 29 via Harper Perennial, making clear that the book is not simply a retread of his own screenplay.

“It’s not just me taking the screenplay and then breaking it down in a novelistic form. I retold the story as a novel,” he explained on the “Pure Cinema Podcast.” “So it’s not like, ‘Oh, OK, well he obviously had a few scenes left over, so he just took the screenplay and novelized it and threw in a few extra scenes.’ It was a complete rethinking of the entire story and not just a rethinking as far as throwing some scenes that were left out of the editing room. But I did so much research.”

But he also revealed that the book will focus heavily on Pitt’s character, stuntman Cliff Booth, including delving into how Cliff may have gotten away with the murder of his wife.

Check out the new trailer for the book “Once Upon a Time in Hollywood” via EW. Preorder the book here.