Just like he did at the 2019 BET Awards and the 2020 Primetime Emmy Awards, Tyler Perry delivered another rousing speech at the 2021 Oscars. “I would hope that we would refuse hate,” Perry said during his powerful address while receiving the Jean Hersholt Humanitarian Award in one of the highlights of the Academy Awards telecast on ABC.

Another emotional acceptance speech that moved viewers came from Thomas Vinterberg, an International Oscar winner for Another Round. He payed tribute to his teenage daughter Ida, who died in a car accident four days into the film’s shoot, and dedicated the award to her.

Minari co-star Yuh-Jung Youn, who had been endearing with her off-the-cuff remarks throughout awards season, notably thanking  Britain’s “snobbish people” during her BAFTA acceptance speech, again did not disappoint. Looking completely star-struck, Yuh-Jung Youn, the first Korean actress to win an Oscar, started off by addressing the category’s presenter Brad Pitt. “I”m so honored to meet you,” she said from afar as there was no interaction between presenters and winners at this year’s Oscars because of Covid safety protocols. She went on to scold Pitt for not visiting the set of Minari and to roast all those who have been mispronouncing her name.

Another veteran actress known for her unpredictable — and always memorable — acceptance speeches, Frances McDormand, got to deliver two of them tonight for Nomadland. First, while accepting the Best Picture prize, she puzzled the audience by saying “We give this one to our wolf,” followed by a long howl. It was later explained backstage that McDormand was playing tribute to the film’s sound mixer, Michael Wolf Snyder, who died last month at the age of 35. Just minutes later, McDormand returned to the stage to pick up the Lead Actress trophy, delivering the shortest acceptance speech of the night that mixed a Macbeth quote with a suggestion for a karaoke bar at the Oscars.

In his emotional acceptance speech, winner Daniel Kaluuya, aknowledged the Black Panthers and Fred Hampton, the character he played in Judah and the Black Messiah. Kaluuya also made a comment that made his mom cringe and his sister bury her head in her hands. Opening his speech with heartfelt thanks to his family, he closed it out by thanking his parents again, this time for having sex so he could be born, a line that didn’t go smoothly with his relatives in attendance.

Kaluuya later participated in a rare entertainment bit on the night, which saw Glenn Close showing off her music knowledge — and dance skills. The quiz involved attendees trying to identify a song segment and guess whether the song was an Oscar winner, Oscar nominee or none of the above. After shaky answers by Kaluuya and Andra Day, Close nailed her question and correctly identified a clip of Da Butt written by Marcus Miller and performed by the DC-based band Experience Unlimited from Spike Lee’s 1988 film, School Daze. She then took her knowledge to the next level by doing the signature dance move from the song to the delight of viewers who called Close a true icon on Twitter. 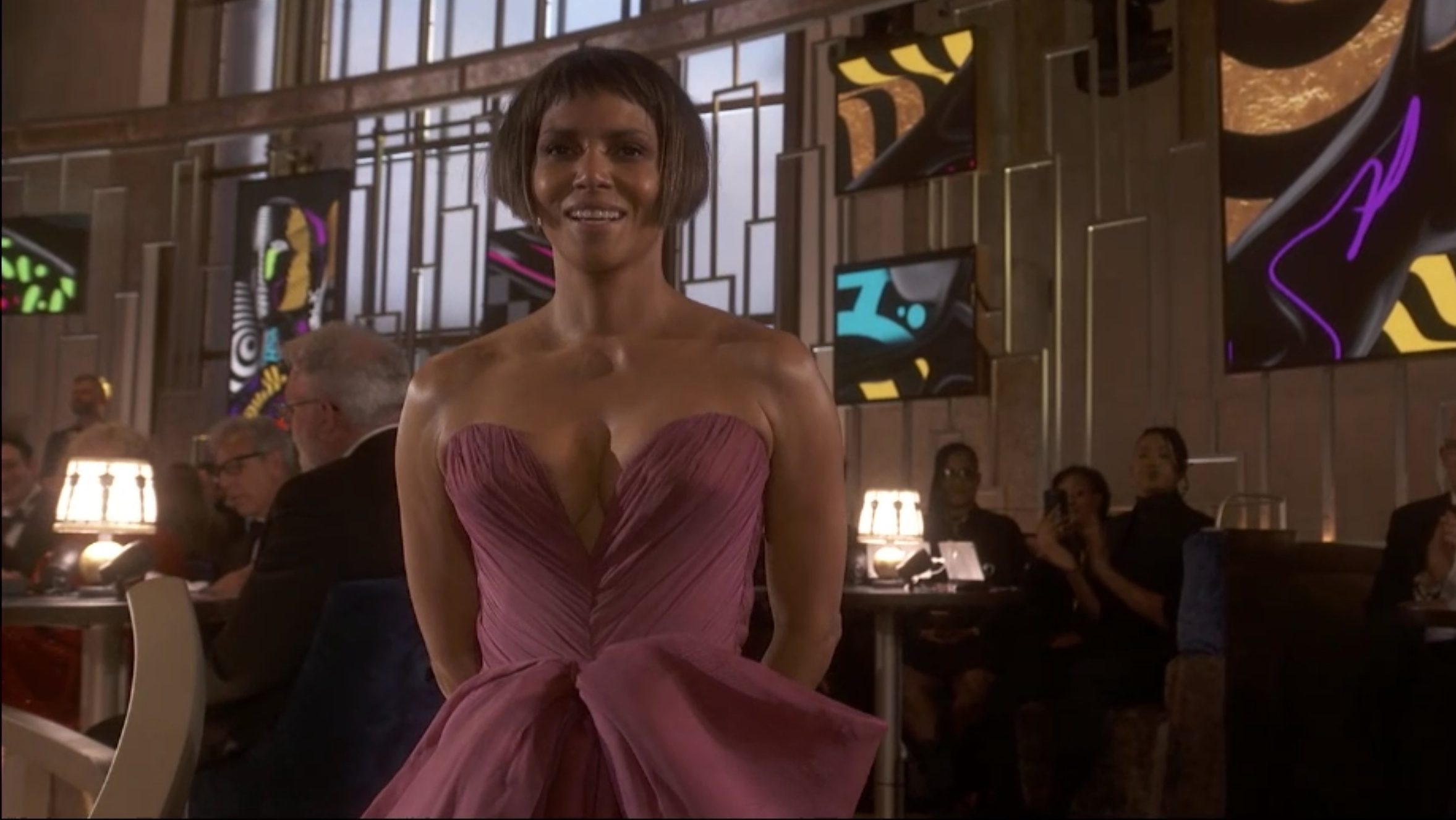 Besides Pitt, who also drew attention with his man bun, stealing the spotlight at the Oscars were presenters Halle Berry, also for her new hairstyle, which made Twitter explode, and Harrison Ford, for his bit reading the brutal Blade Runner editing notes given after a screening of the movie classic.

Despite eschewing a traditional comedic opening number, the Oscars did have a memorable intro, with a long, movie-style first shot featuring Regina King picking up an Oscar from the outdoor deck and walking through the 1930s Art Deco Union train station, where the main ceremony was held, to the Oscar stage.