International Trade Secretary Lizz Truss spoke to Good Morning Britain’s Susanna Reid on the UK striking a post-Brexit trade deal with Australia. Ms Reid praised Ms Truss’ work for striking a deal but raised some concerns she held. She argued that the value of the deal is expected to have a minuscule gain over 15 years of 0.01-0.02 percent for the British GDP.

She then added that Ms Truss’ own estimates have concluded that leaving the EU reduce the GDP by 4 percent.

Ms Truss hit back claiming the trade deal was part of a wider plan for Brexit Britain and its international relations.

Ms Reid said: “Congratulations on the Australian deal by the way, we do love a trade deal. 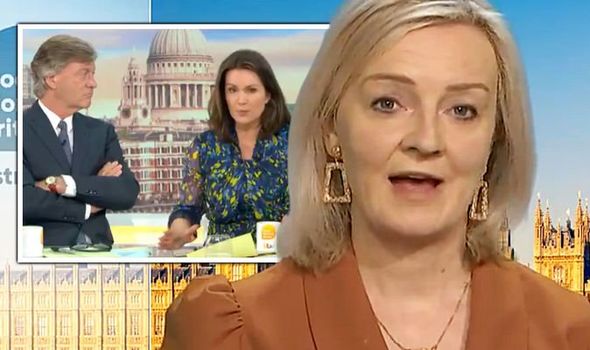 “Just in comparison, your own estimates of leaving the EU single market reduces the UK GDP by 4 whole percent.

“It is good to have a trade deal but it really is a drop in the ocean of what we are losing, isn’t it.”

Ms Truss replied: “The numbers that you have just talked about, that is a static analysis of the world as it is now.

“What we are seeing is a huge rise in trade with the Asian-Pacific market.

“Australia is important in itself, we are likely to see a 30 percent increase in trade by 2030.

“What we have got in this deal is tariffs removed on products like cars, on whisky, much better access for Brits to live and work in Australia, including three years for the under 35s.

“It is also a stepping stone to the Trans-Pacific Partnership which is a major deal.

“With 11 countries in the Pacific region, the population of 500 million, what we are seeing is that is a very fast-growing part of the world.