PSA: We Need to Talk About Kate and Toby's Relationship After the 'This Is Us' Season 5 Finale

[There are spoilers ahead for the ending of the This Is Us season 5 finale. If you haven’t watched the episode yet, hop out of this story and come back another time. You’ve been warned!]

If you are positively shaken after watching the season 5 finale of This Is Us, you are not alone! If you’ve been a longtime fan of the show, you’ve probably rooted for our dear couple Kate (Chrissy Metz) and Toby’s (Chris Sullivan) romance to succeed. After all, they’ve gone through so much together, and now they’ve spent the entire season preparing for the birth of their adopted daughter Hailey.

But after the season 5 finale, y’all…what just happened. We were ALL thrown for a massive loop when we learned just five years after the events of the episode, Kate is not only donning a wedding dress once again, but she’s GETTING MARRIED TO SOMEONE ELSE. Named Phillip. AKA the music teacher at her school. AKA HER BOSS.

I mean—what? Truly, what the heck is going on? But there’s a bigger question to be asked…where is Toby???? We already know after watching a season 3 flash-forward scene that Toby is seen home alone, sans wedding ring, so it looks like the showrunners have been setting this twist up for quite a while.

“It’s meant to be a shock, and then you’re meant to process it. And we don’t expect people who love the couple to necessarily love it right away,” Dan Fogelman told Entertainment Weekly. “We’re trying to capture something we haven’t done on the show, which is a lovely married couple maybe not making it all the way. And it’s something that happens very commonly—more commonly than not in the human experience. It was something we always knew we were going to attack it in our final season.”

Well, that’s great for them. But let’s put on our detective hats and figure out exactly what’s up with these two. Thankfully there are theories floating around about what happens to Kate and Toby during season 6, and it’s time to share them with you.

Theory: Both Kate and Toby’s jobs will get in the way of their marriage.

If you can remember just a few episodes back, we learn Toby was laid off from his job on the day his daughter was born. The result: Kate takes a job as a music teaching assistant, and he’s spiraling after not liking the stay-at-home dad job. But as the latest episode reveals, Toby accepted a job offer—yay him! One issue though: it’s going to keep him in San Francisco three days a week. Yikes.

Perhaps a long-distance marriage will be too much for the couple to bear. We all know Kate is the strongest character on the show (sorry, Randall), and she can basically weather any storm. But sometimes, it takes more than love alone. 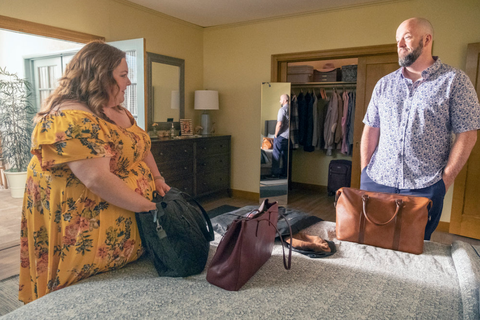 Theory: Maybe the wedding is not what we think?

Apparently Twitter and Reddit are so not down for the demise of this marriage, and there’s a popular fan theory going around looking at the flash-forward scene from the eyes of a duo no one has heard from yet: Madison’s parents. Here’s what one Reddit user explained about the thought:

We do see Madison’s parents having British accents, meaning some part of this theory could be valid. But the whole Kevin and Madison getting married thing? Well, no one truly knows what’s up with those two anyway (despite them looking real chummy in the flash forward scene), so it’s safe to say fans aren’t celebrating this wedding any time soon.

There are definitely lots of thoughts about what’s going on with the Pearson/Damon duo, but all of us fans will need to keep watching to find out exactly what happened to this seemingly-perfect couple.

Want the latest on all things TV? We know you do. You can keep up with all of our entertainment coverage here.