Jane Curtin, Loretta Devine and Ann-Margret rule their senior community in this conventional comedy-drama that doesn’t waste its cast. 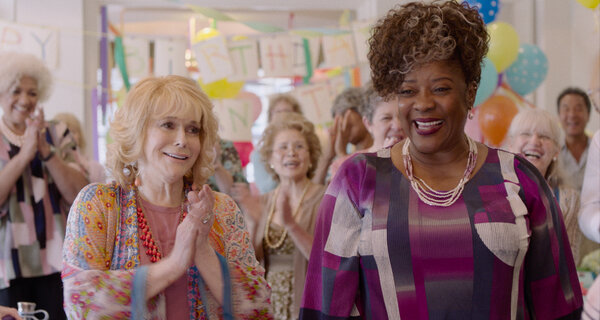 In what may be a first for cinema, “Queen Bees,” directed by Michael Lembeck, depicts a senior citizen using a mobile phone with no difficulty whatsoever. The senior in question is Helen, played by Ellen Burstyn, an independent woman who’s calling the living center for elders that keeps sending her brochures. In emphatic tones she tells the representative that she’s not moving from her house, which is pleasant but feels a little empty.

The problem is, she keeps locking herself out of her house. This habit, and Helen’s isolation as a widow, are of concern to her grandson Peter (Matthew Barnes) and of perhaps mercenary concern to her daughter Laura (Elizabeth Mitchell). When a kitchen fire necessitates repairs, Helen is compelled to move into that living center — on what she repeatedly insists will be a temporary basis.

Here she meets the “Queen Bees” of the movie’s title, a trio of imperious women, led by Janet (Jane Curtin), Sally (Loretta Devine) and Margot (Ann-Margret), who rule the community’s card room and cafeteria. When Sally tries to convince Helen to ingratiate herself with these power holders, Helen protests that this isn’t high school. Sally responds that it’s worse; in “high school we graduate. Here, we die.”

One needn’t bother to make a “Mean Girls” comparison, as the movie’s dialogue itself does. “Queen Bees” is a thoroughly conventional comedy-drama right down to its saccharine score by Walter Murphy. (Yes, the “A Fifth of Beethoven” guy.) That said, it does not waste its impeccable cast, which also includes Christopher Lloyd and a remarkably game James Caan as Helen’s love interest. Each of these stalwarts bring more than charisma to their roles, and when the writing itself displays some snap (which admittedly isn’t that often) the performers bite right into it.