Ramona Singer on 'RHONY' Season 13: The Drama, Newbies and More!

Ramona Singer says 13 is her lucky number, and lucky for her, The Real Housewives of New York City is entering its 13th season.

“Who can believe it?” the OG RHONY star cracks to ET over video chat from her Manhattan apartment, just before jetting off to film Peacock’s Real Housewives vacation series. “I’m really proud of season 13. I think that viewers will be very happy with it. It’s more intense than normal, because we’re filming the five of us all the time without a lot of interaction with other people, so we really had to relate, and it was just very different.”

The ladies of RHONY — Ramona, Luann de Lesseps, Sonja Morgan, Leah McSweeney and newcomer Eboni K. Williams — filmed the new batch of episodes amid the coronavirus pandemic, but Ramona says it all worked out, teasing, “We got more episodes under COVID than we did without COVID. That says it all.”

Season 13 picks up with Ramona returning to New York City after months quarantining with her ex-husband, Mario, and their daughter, Avery, in Florida. Fans kept a close eye on the trio’s social media, trying to figure out if Ramona and Mario were maybe getting back together, but Ramona’s quick to shut that down.

“I’m not attracted to him sexually anymore,” she blurts out, even surprising herself. “Oh, s**t! I shouldn’t say that.”

Ramona and Mario split in 2014, finalizing their divorce two years later after an attempt to reconcile in the wake of Mario cheating on Ramona.

“I mean, I love Mario,” Ramona says today. “We’re very close friends. He gives me some advice, I give him advice. He welcomed me into his home for three months … so, we have a great friendship, but that train left, you know?”

Ramona’s spent the last few years on Housewives “dating and skating,” as she calls it, but that all came to a bit of a halt during corona-times.

“I dated but it didn’t work out,” she laments. “I met a man the summer before corona, and during corona we met, but I just realized he wasn’t for me. He had a temper. Yeah, whatever. You know, you don’t get to know someone until you get to know them.”

While viewers won’t see Ramona hit the bars this time around, she does promise plenty of love between the ladies. She teases a moment with one-time frenemy Leah that “kind of brought a tear to my eye” and a “genuine friendship” with Luann, all thanks to the extra time the women spent together over the last year. She says the pandemic got the creative juices flowing, with the group throwing theme parties just for themselves, from a cast beauty pageant to a topless night of dancing. 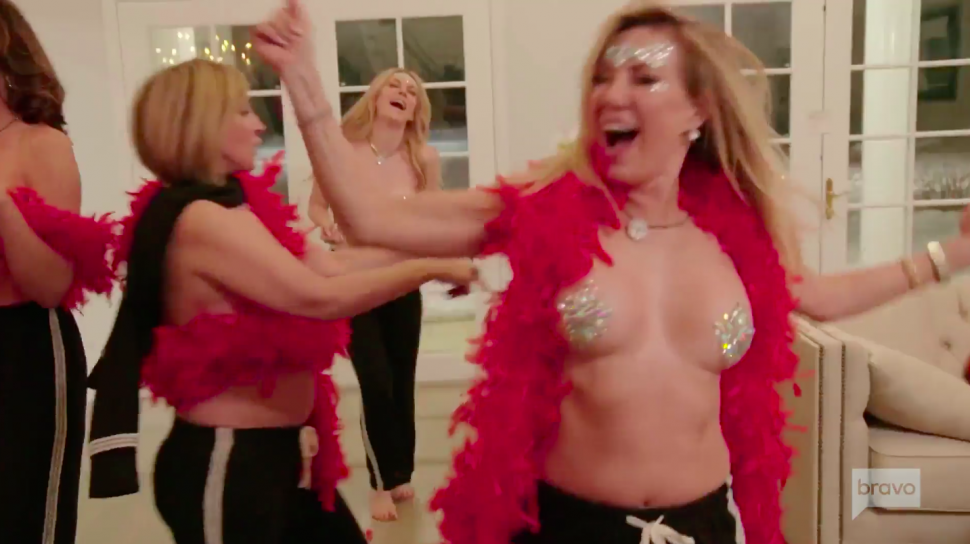 “What happens is, when you’re with five women, you can be intimate and let your hair down… or let your boobs show!” she quips, quickly shutting down those who might call her a hypocrite for hopping around in nothing but pasties after getting upset (and threatening to quit the show!) over Leah grinding in a short dress at her birthday party last season, a birthday featuring Ramona’s “60 close girlfriends.” (Though one close pal was missing: the omnipresent Joni from the early years of the show. When asked what happened to her one-time sidekick, Ramona says the two simply lost touch after Joni divorced her husband, Adam. Ramona and Mario stayed friends with Adam, while Joni drifted away and started “this whole other life.”)

Ramona says there’s a difference between “hiking your dress up” in front of people at a pretty public event and “the intimacy of my home,” confessing, “It was actually my idea. It made us laugh and bond, and have fun.”

Ramona says the night was inspired by a conversation the group got into over who had the best breasts. She didn’t expect to go fully topless at the party, but flashing turned into tops off in a moment of minutes.

“It’s five people in the privacy of my home,” she reiterates. “Unfortunately, there were some cameras, but remember, we’re a reality show and that was my reality.”

Fans will have to wait some time to see the naked dancing — Ramona lets it slip that comes late in the season — but there’s plenty to see on the way there, too. As teased in the trailer, there’s also a painting class featuring a nude male model, a Breakfast at Tiffany’s-themed dinner and a trip to Salem, Massachusetts. It was a lot of time together for new ‘Wife Eboni, who was meeting this group of gals for the first time, but Ramona says she caught on quickly and wasn’t scared to share her opinions. The season sneak peek shows Ramona and Eboni getting into it a couple of times, and Ramona’s tagline hints at some of the friction to come: “I may say the wrong thing, but my intentions are always right.”

“You know, one thing about the Housewives of New York, there’s always conflict but always resolution,” she offers. “That’s the beauty of the show, conflict and resolution, conflict and resolution. We’re all strong-ass women and we speak our minds, and we say what we want to say, and we get it out, but then we all make up, so it’s all good. And Eboni’s a great addition, absolutely. I bonded with her immediately, the moment I met her.”

“She educates [us] on some things that we’re not quite aware of,” she adds, “because, you know, we’re all in our little secular world, and then it was great. She’s a great addition, I’m glad that we diversified this season, and she’s taught us some things, and I think we taught her some things. And that’s what life is all about, it’s growing and learning.”

Along with Eboni is new “friend of” Bershan Shaw, whom Ramona says she likes, and the return of Heather Thomson, who held one of RHONY’s golden apples in seasons 4, 6 and 7. Ramona says she was excited to have Heather back “in the mix,” but it didn’t last long. As widely reported, Heather opted out of filming more of the season after butting heads with Leah.

“Hurricane Leah she experienced, yes,” Ramona admits. “Leah was not happy that Heather was there. I’m not going to give it away why, but she was quite, quite upset that we had Heather there.”

The group lost two members heading into season 13: Tinsley Mortimer, who walked away from the series halfway through season 12, and Dorinda Medley, who exited after taping last year’s reunion after a season of butting heads with Ramona.

“When a cast member leaves, somehow we just pick up where it was left off and don’t really notice that they’re gone,” Ramona says. “We’re all just like, cog in the wheel and… or a spoke in the wheel, and if one goes, the wheel keeps going. So it was fine.”

“Of course she did it on purpose!” she exclaims. “Come on, you know Bethenny very well.”

Ramona confesses she doesn’t have a relationship with Dorinda anymore, but still has “respect for her as a person in a lot of ways” and “only wishes the best for her.” As for whether she’d welcome Dorinda back for a hypothetical season 14, Ramona says, “I don’t know if she’s ready to come back.”

With her season 12 sparring partner out of the picture, Ramona wound up facing off against her longtime best friend, Sonja, in season 13.

“I love and adore Sonja, but I just feel at times she’s not being the best person she can be, and it’s very upsetting as a friend to see someone kind of going down the wrong road, shall we say,” she says. “Moving back into [her] townhouse, thinking she had it sold when it wasn’t sold, yeah, I think that has a lot to do with it. Plus other things, which you’ll see when you watch this season.”

If Sonja ever chooses to put her townhouse back on the market, though, she could list the property with Ramona! The 64-year-old recently secured her real estate license, a journey the show will also document.

“I’ve always been very interested in real estate,” Ramona notes, saying she was inspired to turn her passion into a second chapter career after renovating and selling her longtime apartment on the Upper East Side. It’s the latest business venture for the reality star, who came into the show with a clothing resale business that she parted ways with sometime in the early seasons. What happened to the company, RM Fashions, was never disclosed on the show, though.

“I had the clothing business for literally 30 years, and then the business was changing, the business model, and then I wanted to do other things,” Ramona explains. “I was actually bored.”

Ramona then launched her own jewelry line and range of wines, before stepping away from those businesses, as well.

“You have to love what you do and not be bored,” she says. “And what happened was, I was burning myself out, and I actually got an inner-ear infection and vertigo, so it made me relook at my life. I mean, I’ve been self-made, I put myself through college. I’ve been on my own since I was 16 years old, and it was a wake-up call in my 50s to say, ‘Hey, slow down, enjoy your life, smell the roses, and don’t work your a** off so much.’ I mean, money’s important, it’s not that important. It really isn’t.”

“So I slowed down and then my business was selling my seven-figure apartment,” Ramona continues, “and I didn’t want to pay an architect or a decorator, because I’m frugal and I’m good at it. And my home in the Hamptons, I wanted to update that. I had that for 25 years. So those are my projects, and now my next project is real estate, because I have a passion for real estate. Follow your passions and you’ll be successful.”

Whatever she’s doing is working, as Ramona recently, accidentally posted a screenshot from one of her six-figure bank statements on Instagram. That came not long after she shared a screenshot of her calculator, on which she appeared to be running other financial numbers.

“I’m not good with this technology stuff,” Ramona admits. “You know, your phone updates without you wanting to update it. So basically it was, when I want to post something on Instagram or something, it’ll take the photos I’ve taken instead of a recent one. So, I did something on my calculator. I had to calculate something. It came out to be, what? 13,000-something, I don’t know. And that got posted, and Avery’s like, ‘What are you posting?!’ Like, what? What? Boom.”

Money in the bank and a constant butterfly around her neck. As of late, fans have picked up on a piece of jewelry Ramona seems extremely fond of, a dual butterfly necklace that Ramona pairs with nearly every outfit. 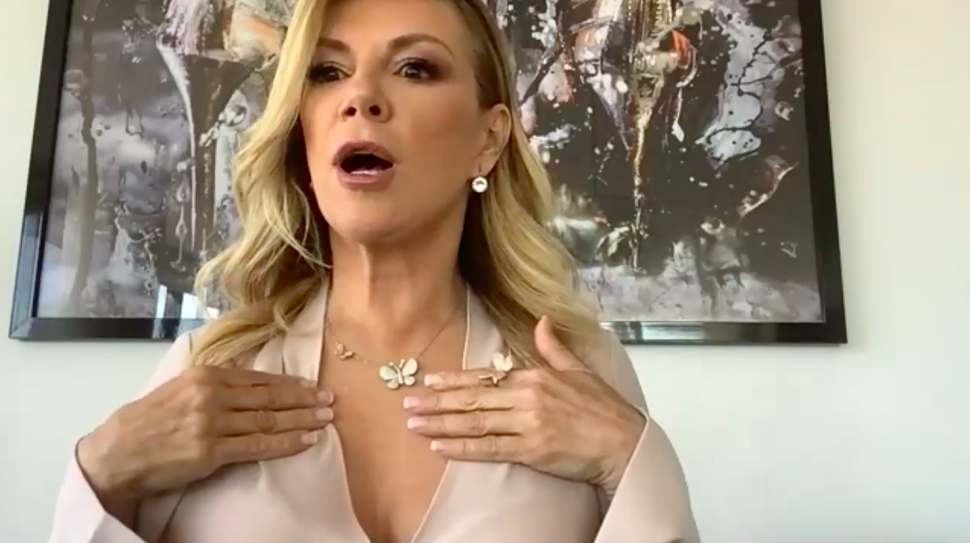