'Rita Moreno: Just a Girl Who Decided to Go for It' Film Review: Documentary Honors a Showbiz Legend 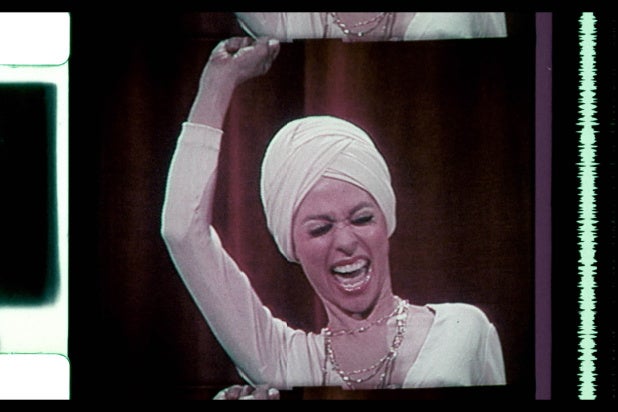 This review of “Rita Moreno: Just a Girl Who Decided to Go for It” was first published at the film’s premiere at the 2021 Sundance Film Festival

For Puerto Rican goddess Rita Moreno, one of the greatest performers — Latina or otherwise — ever to devour our screens with her scintillating talent, the measure of that greatness rests in her career longevity running parallel with integrity. The pedestal of hard-earned success from which she now gazes at Hollywood and its perfidious antics was, at least in the early years, built on perseverance amidst dissatisfaction.

Director Mariem Pérez Riera’s definitive documentary on everything that has colored Moreno’s worldview in nearly nine decades, “Rita Moreno: Just a Girl Who Decided to Go for It,” opens with the dazzling, and often deceiving, glory of her trophies and accolades as she prepares for a Cuban-themed birthday party. As soon as the beloved EGOT winner enters the frame, we are met with her jovial yet biting personality, perhaps a response to having to hold her tongue for so many years in a business designed to exploit and undermine her. There’s nothing restraining her now, so truth flows.

Much like last year’s Sundance doc on astrologer Walter Mercado, “Mucho Mucho Amor,” “Rita Moreno” serves as a powerful cultural artifact that will educate future generations of Latinos about a pioneer who survived and conquered a field unwelcoming of her. Featuring interviews with high-profile entertainers from the community — including Lin-Manuel Miranda (also an executive producer), Eva Longoria, and Gloria Estefan, alongside other key individuals in Moreno’s professional life, such as Morgan Freeman and Norman Lear — there’s an inevitable air of veneration to the piece, and deservingly so.

Nonetheless, Pérez Riera smartly tames the endearing adulation and expounds the reach of the project, with honest conversations on gender violence and ethnic discrimination as they relate to Moreno’s experiences. The filmmaker first inquires about Moreno’s childhood in Humacao, Puerto Rico, and the traumatic transition from those memories of freedom on the Caribbean island to landing in New York City, where the future star became aware she wasn’t seen as an equal. Interrogating the falsehood of the American Dream, Moreno recalls the countless roles where she was forced to darken her skin with makeup and to put on an indistinct pronounced accent that would denote her perceived foreignness.

Formally, the doc doesn’t deviate from an efficacious but standard medley of archival material and talking-head chats, which is to be expected in this kind of biographical effort. Animation serves as one of the few visually distinct flourishes, reiterating Moreno’s attachment to her childhood self as the source of her vivacious nature, but also of some “shadows” that haunt her. An animated paper doll with interchangeable outfits represents Rosita, as she was known then, and this recurrent device helps Pérez Riera create a through-line for the many topics she juggles, including Moreno’s detrimental romantic involvement with famously volatile star Marlon Brando and the psychological wreckage of the aftermath.

That Moreno can so bravely share some of her most personal battles with sexual violence and mental health gives the documentary an acute note of empowerment. Years of therapy helped her to regain her self-worth as a woman undefeated and to develop a sense of pride for her Boricua roots. Both of these facets were then, in turn, reflected in her activism. Pérez Riera also takes a much-needed deep dive into Moreno’s Oscar-winning role of Anita in “West Side Story,” a character the actress felt conflicted about because of Anita’s dismissal of Puerto Rico in an effort to assimilate to the U.S.

To date, Moreno remains one of the very few Latino actors to have ever won an Academy Award (with one of the shortest acceptance speeches). So when a historian poses the question of how much greater the actress’ career could have been had she not faced awful hurdles — a young woman in a sea of predatory sharks, and a Latina at that — we are forced to reckon with the reality of how many more diverse artists could have emerged had conditions been different. It’s a reckoning that makes Moreno’s ascent all the more worthy of admiration, and her triumph spawns the hope that when other girls decide to just go for it, they won’t have to face similar barriers.

Whether winning a Grammy for singing on a PBS kids show (“The Electric Company”) or a Tony for harnessing harmful stereotypes on her own terms (“The Ritz”), Moreno’s capacity for reinvention remains an ongoing process. Most recently seen in Gloria Calderón Kellett’s sitcom “One Day at a Time” playing over-the-top grandmother Lydia, Moreno has once again reintroduced herself to new audiences. And so it seems she’s always been there: This is a woman who, after all, performed for troops being deployed to World War II, co-starred in “Singin’ in the Rain,” and attended the March on Washington where Dr. King gave his emblematic “I Have a Dream” speech.

At once an affecting celebration of a truly peerless icon and a critique of the industry that almost broke her, “Rita Moreno: Just a Girl Who Decided to Go for It” has the enormous responsibility of synthesizing the grandeur of a life well lived, bumps and all, and the unbreakable, giving spirit that took to get her to the pinnacle of respect and recognition. It’s impossible to sum all of that up in clips and anecdotes, but Pérez Riera virtuously tries.