“Robin Robin” (Netflix), the first musical from acclaimed stop-motion animation studio Aardman, is an Oscar-contending, 30-minute holiday short about how our differences make us stronger, created and directed by Dan Ojari and Mikey Please (BAFTA winner for “The Eagleman Stag”).

Executive produced by Aardman head of development Sarah Cox, “Robin Robin” features the voice of Bronte Carmichael as Robin, a charmingly awkward bird with an identity crisis, who is adopted into a loving family of burglar mice and plans an ambitious heist to bag the ultimate prize: an entire sandwich. Adeel Akhtar voices the caring but cautious Dad Mouse single-handedly raising a family of five, joined by Richard E. Grant as the obsessive collector Magpie, and Gillian Anderson as the deliciously villainous Cat.

“The cast really took to the music very well,” Ojari said. “That was a bit of a leap of faith for all of us, because we hadn’t made a musical before, and we didn’t cast actors specifically because they could sing.” 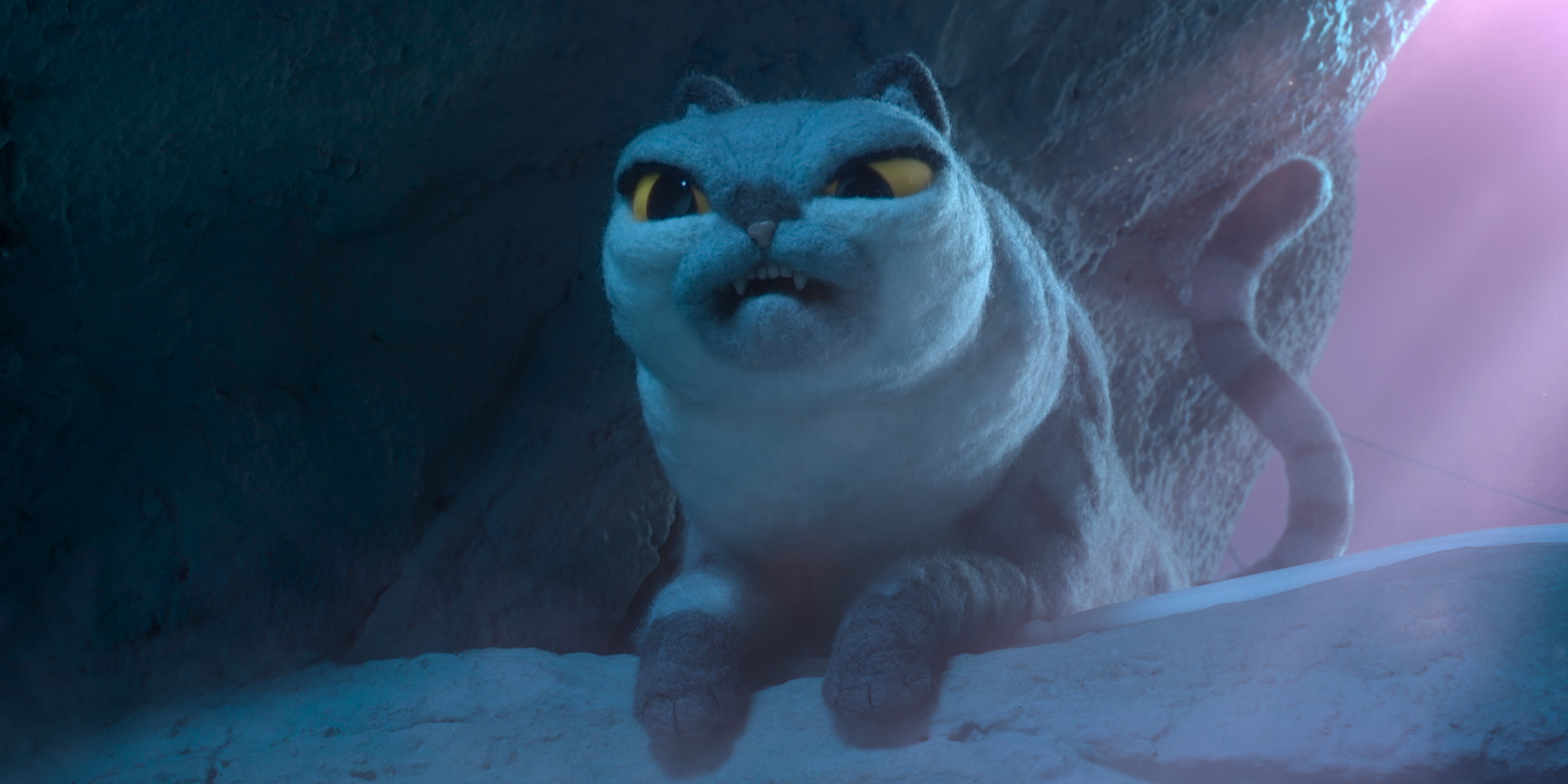 From the start, Ojari and Please knew they wanted to tell their story in musical form. “It had to be a musical because it’s about a bird trying to fit into this quiet, sneaky family,” Ojari continued. “She goes out into the world to find some crumbs to prove that she’s just as good at being a mouse as her brothers and sisters.

“The theme of her song is very much woven into the story,” added Ojari. She’s a loud, exuberant bird, whose song clashes with her family’s song, which creates problems. In the beginning, she’s singing her song to herself. But through her journey she learns to embrace her song and uses it to save her family. And in the end those two melodies blend together beautifully.”

“Robin Robin” was animated using needle felted wool, a painstaking process of shaping wool fibers using a specially barbed needle. The production team of 200 animators, artists, and other crew members created 75 puppets at various scales, including 19 Robins, 11 Magpies, 20 mice, and four cats, along with a host of squirrels, frogs, hedgehogs, woodlice, and even three “who-mans,” as they’re called in the film. During the final labor-intensive stages of the shoot, the production crew achieved about 10 seconds of completed animation each week.

One of the most complex sequences, though, was filmed inside a kitchen built at a 2:1 scale. “Every single detail in that kitchen was knitted by hand,” said Ojari. “All the spoons and all the cups, the tea pots, even the coasters. Every single thing in it was handcrafted, but at a larger scale.” 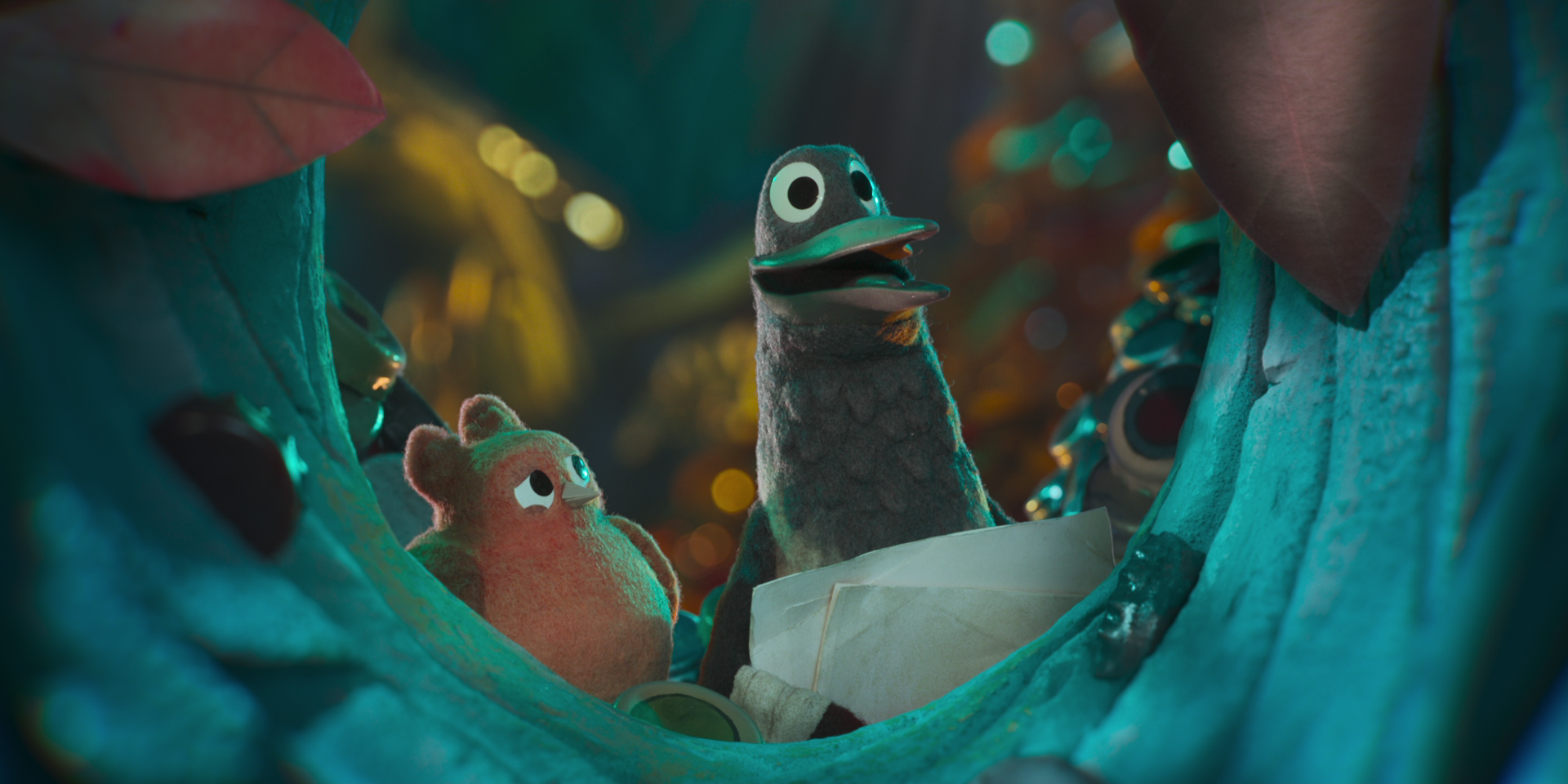 Ojari and Please both attended Royal College of the Arts, launching their production company Parabella Studios shortly after graduation. The duo conceived of “Robin Robin” over the course of many informal late night sessions and refined it with the retelling of the story to their families each Christmas. “When you’re writing and directing something like this, you just become obsessed with trying to make it the best thing it can be, and nothing else matters,” Ojari said of the opportunity to work with Aardman.

The film’s visuals were inspired by the colorful palette of Canadian illustrator and painter Matthew Forsythe, who designed the characters for “Robin Robin” and is known for his painterly illustrative style. “We’ve loved his work for a long time,” said Please, recounting how they used his approach to color as a visual template. “A leaf might be green, but that green is made up of purples and oranges and blues and pinks, but the impression of it is green.”

While all of the atmospheric elements such as snow and smoke were shot using a traditional rostrum camera, VFX supervisor John Biggins had the idea to shoot a large portion of the film using stereoscopic 3D cameras in order to capture 3D data of the sets. This technique allowed the filmmakers to integrate the traditional rostrum animation within a real 3D environment without the use of CG.

“We were able to make trees disappear into the mist and rain pass behind blades of grass, and characters move through all of it without having to rotoscope everything and paste the elements behind,” added Please. “That’s why, when you watch the film, hopefully you’ll feel like, ‘Oh, all this atmosphere is there, and then they must have got it in-camera,’ but we didn’t. It’s all in-camera elements that have been expertly integrated by our team of VFX artists.”

“Robin Robin” is now available to stream on Netflix.