'Save the Cinerama Dome' Petition Draws Nearly 10,000 Signatures in 3 Days 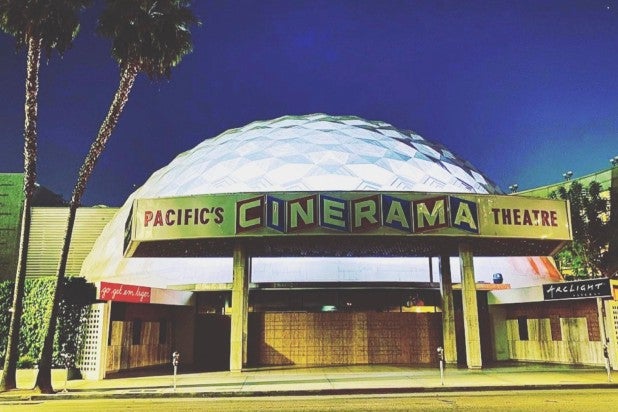 The impact of the Cinerama Dome on Hollywood film culture can be seen in a new Change.org petition asking studios to bring the 1960s cinema back to life after its closure — along with the entirety of ArcLight Cinemas and Pacific Theaters — was announced on Monday. Launched three days ago, the petition is approaching 10,000 signatures as of Thursday morning.

“With the recent news that Arclight Cinemas is closing forever, we cannot allow the Dome to be demolished or changed,” the petition reads. “We the people (cinephiles) are calling on Amazon, Walt Disney Studios, Apple, Netflix or someone else to save the Dome, and continue the legacy of the Cinerama Dome! We are also calling for Arclight Cinemas to be saved!”

The Cinerama Dome was named a Historic-Cultural Monument by the Los Angeles Cultural Heritage Commission in 1998, meaning any permits to demolish or significantly alter the building must be presented to the commission. Decurion, the company that owns ArcLight, owns not only the Cinerama Dome but also the land underneath it, so any plans to sell or alter the theater would be made directly by them. The company has declined further comment beyond its announcement on Monday that all Pacific Theaters and ArcLight Cinemas locations would not reopen.

The Cinerama Dome has become a popular gathering spot for cinephiles and Hollywood insiders since ArcLight refurbished as part of an adjacent 15-screen multiplex that opened in 2002. Along with presenting classic three-strip Cinerama widescreen films, the Dome was regularly updated to include new technological advancements like digital projection, 3D and laser projection. The site was also included in films like Quentin Tarantino’s “Once Upon a Time…in Hollywood.”

While studios have only recently regained the ability to own multiplexes thanks to the elimination of the Paramount Decrees, only a small handful of historic, single-screen movie palaces have been bought by distributors. The El Capitan Theatre in Los Angeles, also named a Historic-Cultural Monument, is owned by Disney and has screened the studio’s films for over 20 years. Recently, Netflix also bought ownership stakes in the Paris Theater in Manhattan and the Egyptian Theater down the street from the El Capitan. It is unclear at this point if Decurion would consider selling the Cinerama Dome alone to a studio, as suggested in the petition, while the ArcLight Hollywood, which Decurion does not own the land for, is sold separately.