The Chase: Mark Labbett devastated as he misses out on ITV show record ‘There it goes!’

Mark, 55, was revealed to be The Chase quizmaster the four new contestants had to battle against in the latest edition of the ITV programme. The Beast is known for being a formidable force and it is very rare he ever loses against host Bradley Walsh, 60, and his team. However, there is one accolade the general knowledge guru has yet to claim and was convinced he would get his hands on the title during the nail-biting game, only for the record to be snatched away from him in the last few moments of the episode.

It’s fair to say The Beast was on his A-game, knocking out player after player as the rounds unfolded, with his superior knowledge too great to defeat.

Having successfully taken out all four of his opponents ahead of the Final Chase, Mark had not answered a single question incorrectly.

As of yet, none of the five Chasers have ever gone through an entire episode and not got at least one question wrong.

This meant the Chaser went into the concluding round of the game on track to snatch the record.

The four contestants had been drafted back with the first player of the day, Eddie, being chosen as the person to play for the consolation jackpot £4,000. 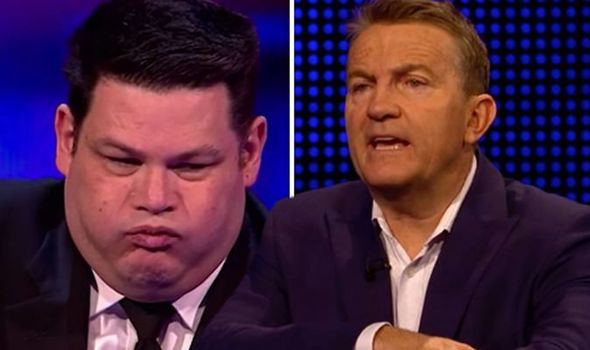 On his own and with his teammates watching on, the gas and electric metre reader managed to secure 15 points between their money and the Chaser.

Taking his seat at the top of the prize table, Mark told Bradley he had correctly answered 15 questions during the episode and just need to match this in the Final Chase to secure the record.

However, after just one question, his performance was tarnished as The Beast made an error and was left holding his head in his hands.

“There it goes!” he remarked, before getting his head back into the game and defeating his opponents once again.