Soon after completing his sprawling adaptation of an early 2000s manga by Hoshisato Mochiru, writer-director Fukada Kōji openly began to lament that Japanese cinema “is going to go down the drain” if it continues to mine graphic novels and other pre-existing intellectual property instead of pursuing original ideas. Needless to say, the timing of his criticism made Fukada seem like something of a flawed messenger for the cause, even if he was also arguing for a broader national investment in the culture and venues of arthouse cinema at the same time.

After watching all 232 minutes of “The Real Thing,” however, it’s easy to appreciate why the 41-year-old “Harmonium” filmmaker gave himself a get out of jail free card: This befuddled anti-romance, about a cautious salaryman whose life unravels after he saves a reckless woman from getting hit by a train, may have its roots in a popular comic book (and in Jonathan Demme’s “Something Wild” before that), but it’s unmistakably a Fukada movie to its core. There’s no selling out here. No concessions to mainstream taste. On the contrary, “The Real Thing” might be the purest — if not the most concise — work yet from an emerging auteur who’s singularly compelled by the friction between public order and private chaos.

Originally aired as a 10-episode series on Nagoya TV before Fukada cut it down to a mere four hours in order to land a spot in last year’s ceremonial Cannes lineup, “The Real Thing” essentially slows down and stretches out a traditional romantic comedy until the cute tropes and characterizations that define the genre start to distort into low-key psychosis. And it’s able to do that because the narrative tension that pushes this story forward — or repeatedly strains to nudge it uphill in a Sisyphean struggle against the gravity of certain norms — isn’t rooted in whether or not the straight-laced boy and the free-spirited girl will get together in the end, but rather in the slow untangling of the social roles that knot them up and snag them together.

Part Richard Curtis movie and part clinical science experiment, Fukada’s sterile epic might be full of enough meet-cutes and misunderstandings to fill a “Love, Actually” sequel, but it actually couldn’t be less interested in love. Or sex. Or in the squishy feeling of a big first kiss as the camera rises and the credits fall. No, the only relationship that matters here is the one between the inertia of control and the entropy of letting go, and watching them interact is as fascinating and fun as it sounds. Which is to say: quite fascinating and barely even a little fun.

Tsuji (Morisaki Win) is a 30-year-old executive at a toy and fireworks company whose swoop haircut and sunken personality combine to suggest a neutered version of Lupin III. He seems like a nice guy who cares about his work and is happy enough with his low-stress existence as the office hunk — even at a company that forbids romantic entanglements — but the guy is a coward at heart. And he sort of knows it. When one of the two co-workers with whom Tsuji is having sex (off-screen) insists that he’s “too kind to everyone,” our man can’t help but mutter “not really” in reply.

Tsuji just likes being in control. He likes having his pick. He’s willing to suck face in the stockroom when young Minako (Fukunaga Akari) corners him there on her 24th birthday, but only because it’s on his terms. Tsuji is willing to let the older and more urgent Ms. Hosokawa (Ishibashi Kei) come over to his spacious but storage unit-like Tokyo apartment and cos-play as his future wife, but only because he knows that he holds all the emotional leverage.

In other words, he’s a vacant little shit who only grows less likeable as the movie goes on and his fear of vulnerability is challenged by a wild brush with an untame-able life-force. Tsuji abhors sloppiness in toys and people alike (“I hate things that are half-assed,” he says), and anyone who’s seen “Along Came Polly” can probably guess what happens when he meets a beautiful, broke, and flustered serial liar at a convenience store one night. Ukiyo (Tsuchimura Kaho) is trying to make sense of a giant roadmap the first time Tsuji sees her, which is basically the ultimate mating call for any man with a white knight complex.

When her car stalls out at a railroad crossing a few minutes later, Tsuji pushes it to safety just in the nick of time, and is so enamored by the encounter that he doesn’t even bother to ask why Ukiyo just sat in the driver’s seat and waited to die. When Ukiyo inexplicably tells the cops that Tsuji was the one behind the wheel, you can feel him becoming magnetized by the senselessness of it all. He knows that he wants to be involved with this woman but he doesn’t know why, and that only makes him want to invest himself deeper. The next thing Tsuji knows, he’s paying off the $11,000 debt that Ukiyo owes to a shady yakuza creditor (and had been paying off with involuntary sex work), unpacking her sordid romantic history, and trying to protect this alluring mystery woman from the next of her many close encounters with death. “I can tell she’s the kind of woman who will ruin a man,” someone tells Tsuji, but maybe he wants to be ruined a little bit.

If Ukiyo would seem to be the prototypical manic pixie dream girl, “The Real Thing” amusingly subverts that archetype at every turn. All Ukiyo does is apologize for herself and insist that she isn’t worth the trouble, and rather than contradict that assessment by focusing on her beauty and “charm,” Fukada keeps finding new ways of underlining it. Not only is every new detail of her alluring backstory more detestable than the last (let’s just say she’s terribly unreliable to all of her loved ones), but there isn’t an ounce of sexy intrigue to her current situation. 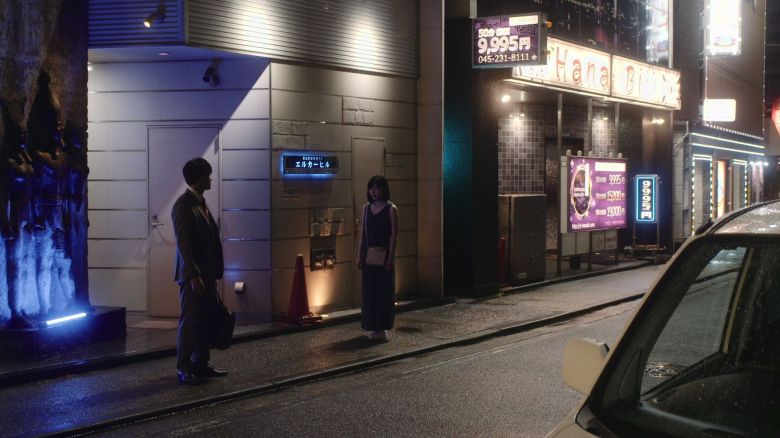 You know how Melanie Griffith injects a lust for life into everything she touches in “Something Wild”? Well, Fukada doesn’t let that happen. His drab and anemic style — defined by a matte digital image that might be enlivened by a slow zoom or a fleeting blast of synths whenever things get randy — sucks the energy out of anything a more traditional entertainment might regard as seductive. Ukiyo’s indentured servitude as a mob-controlled sex worker is almost as unglamorous as it would be in real life. The scar on her wrist hasn’t fully scabbed over because she keeps picking at it. The flightiness that finds her flitting in and out of Tsuji’s life over and over again as he blows up his other relationships and risks his career to “save” her? It’s not the freedom of an uncaged bird so much as the frailty of someone who’s forfeited everything in order to maintain the romantic fantasy of her own existence.

From “Hospitalité” to “A Girl Missing,” Fukada has maintained a consistent fascination with bourgeois characters who are divided against themselves; ordinary men and women of modern Japan who struggle to understand their own selves in a hierarchical society where everything around them hums with purpose. Some people find ways to put their head down and reconcile that disconnect, but Fukada’s characters tend to be pulled apart at the seams.

“It’s hard to see weakness,” someone cautions here, “especially your own.” In “The Real Thing,” Fukada uses the heightened reality of romantic comedies to examine that blind spot with clinical attention, as Tsuji and Ukiyo move in and fall out with each other ad nauseam like lab rats who refuse to learn anything, even as the people around them wise up. It’s no surprise that the most conventionally entertaining scene in the whole story comes when one of Tsuji’s part-time girlfriends comes at him with a cooking knife and the realization that “It was my patience that was oppressing me and making me so pathetic.” It’s a cathartic moment in a largely exasperating movie about two people navigating the great mystery of themselves as they move through the rocky shoals of workplace misogyny, social conservatism, and the shadow personas they’ve developed as a form of self-defense.

Fukada’s emphasis on banality — reflected in form and flow — is enough to appreciate what his characters are hoping to find in each other, and the film’s repetitive nature results in a flattening effect that “The Real Thing” elegantly uses to invert Tsuji and Ukiyo’s roles down the home stretch. As was also the case in “A Girl Missing,” however, that tedium is a one-note trap for a movie that’s at its most compelling when it’s openly playing against genre convention.

After a few hours of making Tsuji and Ukiyo run toward, and then away, and then toward, and then away, and then toward (etc.) each other like a slow-motion “Tom & Jerry cartoon,” Fukada loses sight of the fakeness that “The Real Thing” works so hard to undermine. The journey these characters take on their way to stop lying to themselves is worth your time, but when they finally arrive, it’s hard not to think there wasn’t a faster or more honest way there.

Film Movement will release “The Real Thing” on Virtual Cinema and VOD on Friday, June 4.