This film dramatizes the story of two real-life sisters from Syria and their ordeal fleeing to Europe. One eventually competed at the Olympics. 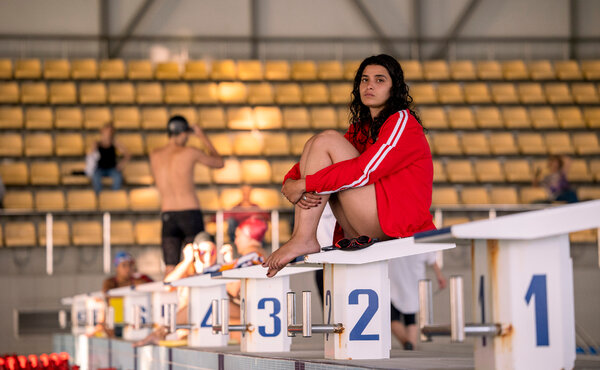 In most movies, an emotional triumph at the Olympics would be the principal goal for a protagonist. In “The Swimmers,” it’s more of a secondary swell. The film dramatizes the story of the sisters Yusra and Sara Mardini, refugees from Syria. When crossing from Turkey to the Greek island of Lesbos, they jumped in the water and swam for three and a half hours, helping their crowded boat complete the passage. Yusra eventually competed on the inaugural refugee team at the 2016 Olympics in Rio de Janeiro.

Directed by Sally El Hosaini, “The Swimmers” is most effective as a procedural of the relentless challenges that the Mardinis faced. Yusra (Nathalie Issa) and Sara (Manal Issa — the actresses are sisters, too), trained as competitive swimmers by their father (Ali Suliman), are shown living in 2015 in a Syria where death can come at any moment. For Sara, the antidote is partying: Both siblings shown dancing at a club as bombs are dropped in the distance. But Yusra, more serious about her swimming, frets. They soon learn of the death of Sara’s third friend within a month.

What might sound like the film’s centerpiece — Sara and Yusra’s harrowing swim — arrives at the one-third mark. Even after the landing in Lesbos, where the camera pulls back to show an overhead view of a vast, frame-filling pile of refugees’ life jackets, the trek requires the Mardinis and others they’ve befriended to trust the right people, spend money wisely and cross borders without being flagged. “The Swimmers” tells this story as an inspirational (but rarely sugarcoated) crowd-pleaser. Within those terms, it hits its marks.