Tyler Cameron was the hottest commodity to come out of Hannah Brown’s season of The Bachelorette.

Tyler knew he was a wanted man, as he started dating Gigi Hadid shortly after his time on the show.

For months, fans have hoped Tyler and Hannah would find their way back together, but they haven’t confirmed anything.

Even though Tyler found fame through The Bachelorette platform, he remains good at speaking with fans online, giving them time and attention.

So when he asked fans to help him out with movie recommendations, fans were quick to reply.

Tyler Cameron makes a joke about Peter and Hannah Ann

On Twitter, someone recommended he watch Miracle in Cell No. 7. The user shared a screenshot of the promotional material, which shows a happy man and a little girl, plus a lineup of the other cast members.

And the two main stars on the promotional material do look similar to a Bachelor duo.

“Thought that was Peter and Hannah Ann at first,” Tyler replied. 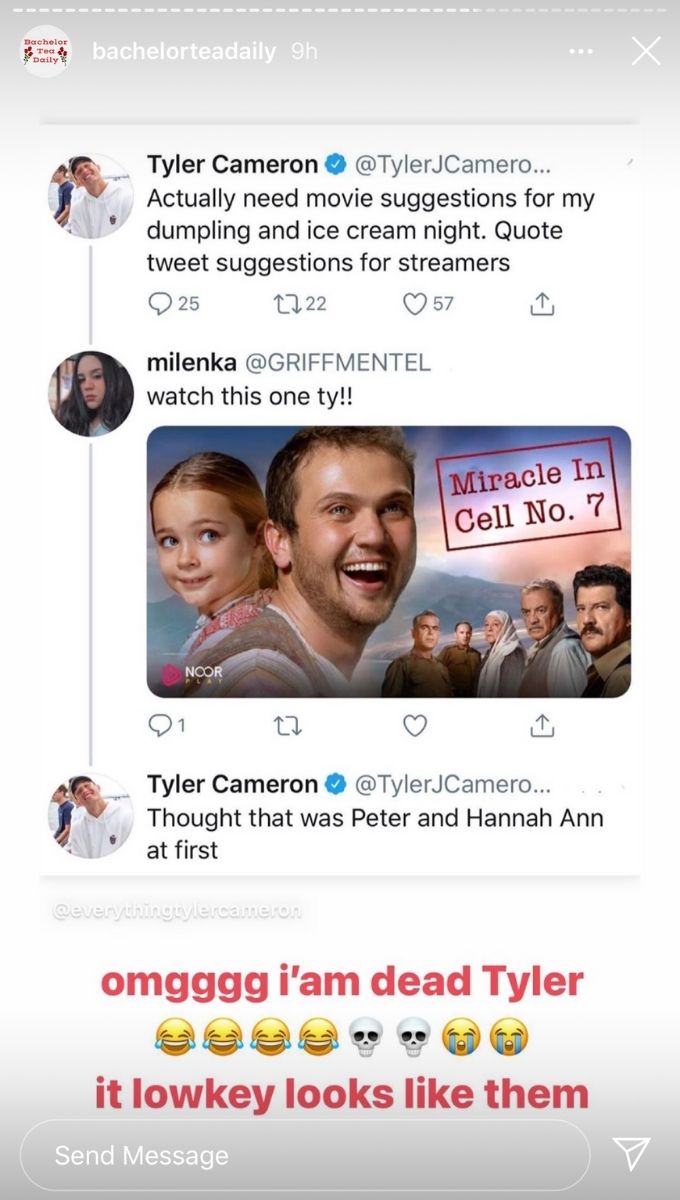 And this user wasn’t the only one who thought this was a hilarious comparison.

“Omg you win the internet tonight,” one fan tweeted on his thread while another added, “OMG I am dead!”

Peter and Hannah Ann did not chime in. As fans recall, Peter moved on with Kelley Flanagan. Kelley isn’t happy when Hannah Ann and Madison Prewett bring up the past.

This week, Tyler was spotted in Los Angeles with Hannah Brown.

He had been on a trip across the country, documenting his time in New Mexico. He didn’t share that he was going to meet up with his ex-girlfriend from the show.

It was earlier this week that Hannah and Tyler were spotted together in Los Angeles, and fans freaked out. They never confirmed they were together this week, but fans hoped they would share the news.

As fans held onto hope that they would get back together, a source spoke out about their meeting, revealing they were just friends. The source also explains that they are great friends, leaning on each other during tough times.

Just this spring, Tyler suddenly lost his mother to a brain aneurysm. Around the same time, Hannah’s brother overdosed but survived.

The Bachelorette premieres Tuesday, Oct. 13, at 8/7c on ABC.