Bill Turnbull grilled Thérèse Coffey about the eight Covid-19 variant hotspots which have seen travel restricted to essential only. The Good Morning Britain guest presenter wanted to know why the government had not held a briefing to announce the changes but the MP was adamant the notification on the government website along with communication in the local areas was sufficient enough.

Turnbull remarked: “Sorry to interrupt you, it may be a formalisation to you but it’s very important to those people in theses areas who are just finding out about it, today!

“Why didn’t anybody get told? Putting it on a website on Friday afternoon doesn’t help anyone.”

“I think it’s been clear to the local communities that with the extra testing which has been happening there, also the extra efforts trying to get more people to take up the vaccination has had a very focussed approach on the communities around the country where we’ve seen transmission increasing,” Coffey replied.

“So it’s important that government sets out aspects of formal guidance, but I think the activity on the ground has been very clear working in partnerships with local councils and communities to step up.” 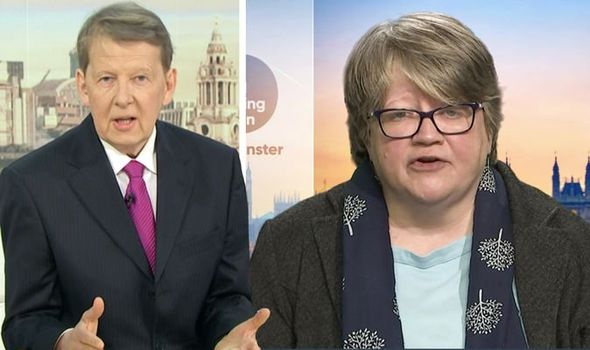 Turnbull continued: “Yes, my question is, why didn’t people in these areas get told? Why did it just get put on the website?”

“We mentioned earlier you have a very expensive, very effective – you’d hope – new briefing room where you could’ve held one of the briefings to announce that in Bedford, Blackburn with Darwen, Bolton, Burley, Kirklees, Leicester, Hounslow and North Tyneside, you cannot travel in and out unless it is essential. Why not announce it?”

“These are sensible precautions, I would think all the activity that has happened the local communicates the extra communications which have been going on, on the ground about increasing the amount of testing, making it as straightforward as possible for people to get vaccinations, really putting effort in there, shows the government is particularly concerned about the spread of the virus in those communities,” the politician explained.

“This is just about an element of formal guidance going up on gov.uk.”

Coffey said: “But the focus has been very much on those communities, Bill and Susanna.”

“Yes, it is, absolutely. That’s all fine,” GMB viewers heard Turnbull remark. “But we’re not asking that question.

“We’re asking why the message didn’t get out to these people in a proper manner?

“That’s one of the basics of government; you make a rule, you give some formal guidance and you tell people about it. This didn’t happen.”

“I think people have been told in those local communities that a particular concerns whether is in Bolton or Blackburn, where were’ve seen the increase, that’s why there has been targeted activity,” Coffey reiterated.